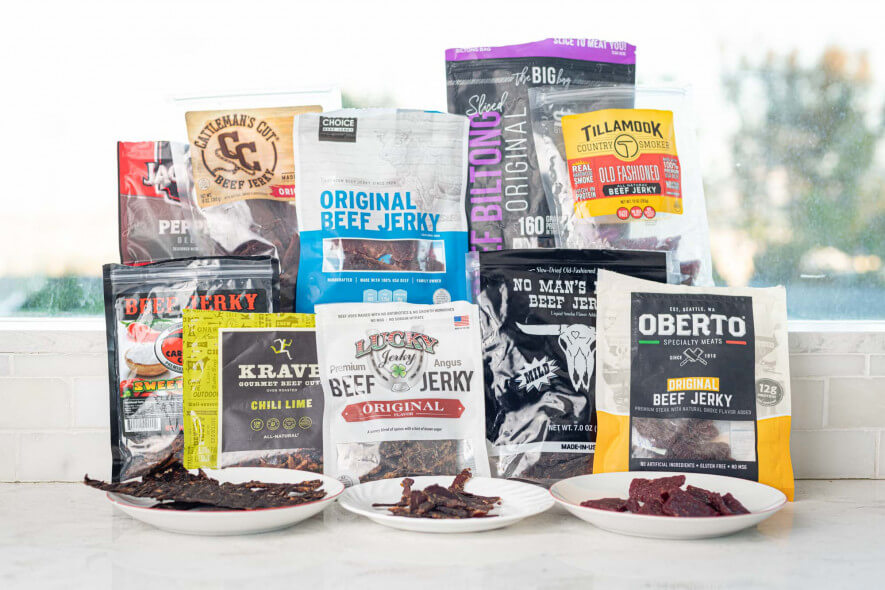 To find the best beef jerky, our testers ate 15 top brands side-by-side, one piece at a time, until a clear winner was found. We enjoyed most of the jerky we found, but the brand that most satisfied all our dried-meat cravings was Lucky Jerky – Premium Angus, which has a minimal ingredient list and a perfect chewy texture. Our favorite flavored jerky was Carnivore Candy – Sweet Picante, and our value-priced runner-up was the widely-available Oberto – Original. 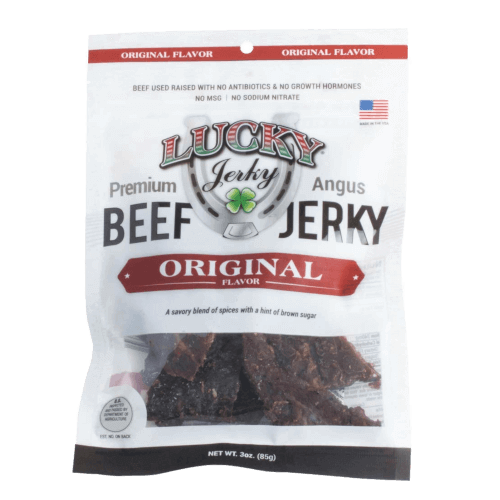 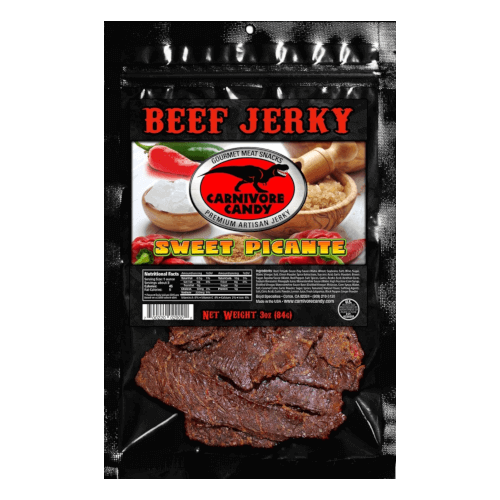 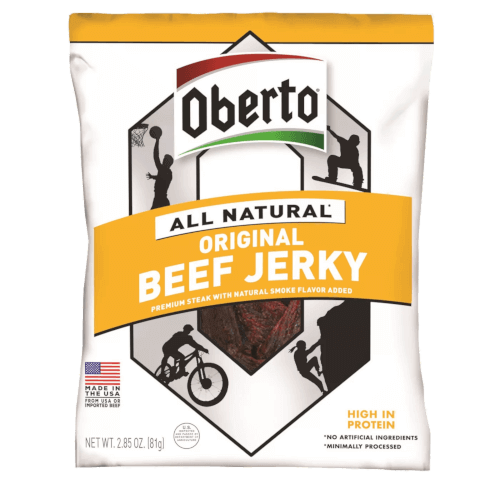 To find the best beef jerky, our testers ate 15 top brands side-by-side, one piece at a time, until a clear winner was found. We enjoyed most of the jerky we found, but the brand that most satisfied all our dried-meat cravings was Lucky Jerky – Premium Angus, which has a minimal ingredient list and a perfect chewy texture. Our favorite flavored jerky was Carnivore Candy – Sweet Picante, and our value-priced runner-up was the widely-available Oberto – Original.

This list features the top ten brands we tried. There were a few others that we didn’t like, and there’s a world of artisan-made jerky that’s too expensive to buy, but these are reliable and affordable choices.

How we selected the best beef jerky 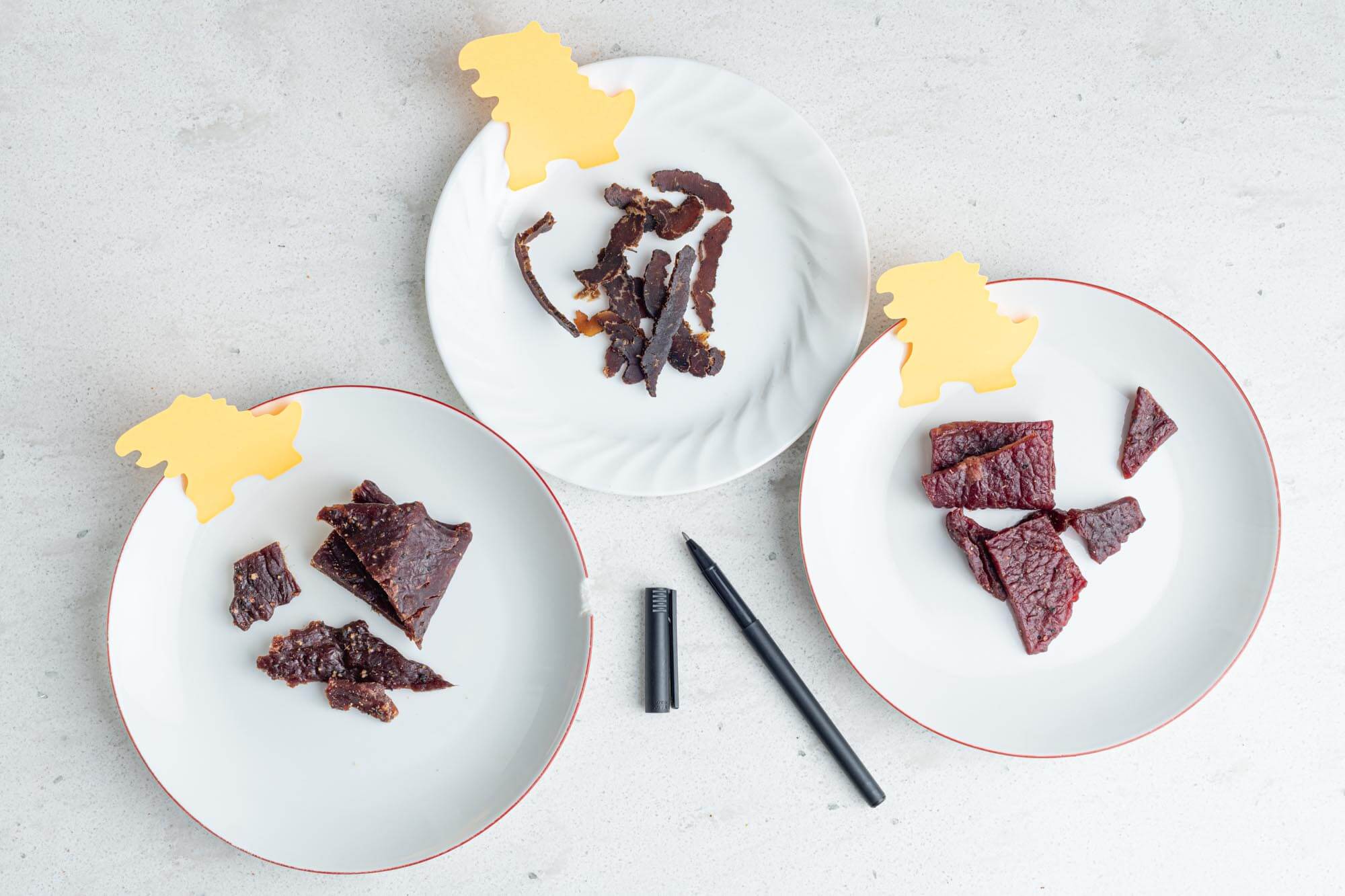 Flavor: The most important quality is also the most elusive, but our testers agreed that jerky should taste like delicious beef. Even in a specialty flavor, we wanted beef to be the prominent flavor, so we didn’t test extra-hot varieties. Smoke isn’t an essential part of jerky, but we ranked jerky higher if it tasted more like the result of real hardwood smoke. We tried not to let sweetness sway us too much, though when more complex molasses flavors came into play, we gave full credit.

Moisture content and texture: As we learned when testing food dehydrators, a key factor to jerky texture is how much moisture is removed. For a more tender jerky, you need other additives — salt or sugar, usually — to keep water molecules tied up so bacteria can’t grow. Moist jerky also smells strongly of the flavoring and the meat itself, and that can be off-putting to some. If you like your jerky to last longer (both in storage and when you’re chewing on it) some brands remove water until the meat almost turns into rawhide.

Sugar: As noted above, sugar is an important ingredient for keeping jerky fresh on the shelf. If you want jerky in your diet for protein but also want to avoid carbs, it’s important to check how much sugar has been added — for some brands, it makes up almost a third of the jerky’s weight.

Price and availability: We love most of the jerky we find at out-of-the-way smokehouses and butcher shops — from Stawnichy’s in Mundare to Cured by Visconti in Leavenworth to Mahogany Smoked Meats in Bishop — but typically it’s a long wait to get orders through, and the cost can be prohibitive except on special occasions. We eliminated brands that sell for more than $3 per ounce, including shipping.

Whole muscle vs processed: We tested only whole-muscle jerky, but “ground and formed” jerky products are also available. The big difference between them is that ground beef has had its connective fibers chopped up, so the jerky will be easier to chew.

After sampling 15 different brands in a blind test, we picked Lucky Jerky – Original Premium Angus as the best beef jerky overall. This brand had the most balanced texture — chewy without being crumbly — and the pieces in our bag were almost all larger than an inch square with very few crumbs.

Lucky Jerky comes in four flavors: Original, Teriyaki, Peppered and Red Pepper. The Original flavor is a blend of onion, garlic, bell pepper and orange peel, and it’s just enough to make the beef taste great without masking any of the delicious natural flavor.

For those who want a little variety in their snack routine, Carnivore Candy – Sweet Picante is another jerky with a great chewy-yet-tender texture and just enough heat and sweetness to make it more interesting. The seasoning does coat the jerky in a paste-like texture, but it doesn’t leave a residue on your fingertips. The amount of sugar in this blend is surprisingly low, just 2 grams per 28 gram serving.

Carnivore Candy comes in nine flavors, with a few extra-hot options if you like to keep the snack-poachers at bay with spicy surprises. The pieces in our bag weren’t as big as we’d have liked, but you get a bonus dental-floss-pick that definitely comes in handy.

Our testers weren’t sure where to place Oberto – Original at first; it’s on the tender side of the texture spectrum, with enough resistance to make chewing satisfying but not enough to make your jaw sore. It doesn’t have any distinctive qualities that make it stand out, but there are no huge flaws either.

The Oberto flavor is classic American jerky, with onion and Worcestershire sauce and a hint of smoke flavoring. The average size of the pieces is small, but the price is also very low. This is our pick for the best gas station brand.

Stryve – Sliced Beef Biltong is clearly trying to appeal to the Keto crowd with this no-added-sugar meat snack, and it brings a new flavor to that table, too: Biltong is a traditional South African beef snack that’s flavored with vinegar and coriander. Another distinction is that whole cuts of beef are cured before slicing, which means the strips are more uniform and easier to handle than the mix of crumbs and giant sheets you get with other jerky.

Stryve’s process doesn’t have the distinct coloring of the original, probably since U.S. safety standards require some cooking while the meat is still moist. We were hoping the spices would be a bit stronger; the most distinctive feature was the sourness of the vinegar and the smell of raisins when you open the bag. It won’t appeal to everyone, but Stryve is worth trying if you’re looking for something new. We also tried another American-made Biltong brand, Ayoba-Yo, that tasted bland.

OK, enough with the fancy stuff. Tillamook – Old Fashioned beef jerky is “all natural” smoked jerky that has just seven ingredients. The smoke flavor is subtle, but we don’t doubt that it’s real.

We knocked the Tillamook jerky down a few notches in the ranks because of the amount of sugar in the flavor: It’s very sweet. Also, the pieces are just a bit too thick and moist for our liking. Jerky like this is closer to dried sausage, and the chewing is just too easy; you wind up devouring an entire serving in one go.

When we tasted Krave – Chili Lime jerky for the first time, we agreed that it was a winning flavor. The downfall of this brand is the texture; it’s not too dry necessarily, but the way the meat was cut and packaged meant the bag was mostly full of meat-crumbs.

If the pieces were larger and the flavor didn’t rely so heavily on sugar — tied for highest on the list at 9 grams per serving — Krave could have ranked higher. The blend of heat and sweet is tasty but not quite as satisfying as Carnivore Candy.

Whether you like No Man’s Land beef jerky will depend on how much you like chewing, and whether you can stand salt and liquid smoke flavoring. This jerky is dry and tough, but it’s not crumbly because the cut follows the grain. You can even peel apart the layers of muscle tissue as you break pieces off for easier snacking.

No Man’s Land has a thick, warm, soy-sauce-laden flavor that also gives away its fake-smoke secret the instant you smell it wafting out of the bag. It’s not a bad flavor for jerky, but when compared with the naturally smoked (or better-blended) jerkies higher up on the list, it was inferior. We kept this in the top ten since it’s a good example of extra-chewy beef jerky, and it doesn’t mask the other flavors with sugar.

Another popular brand that almost made it into the top five is Cattleman’s Cut – Original, with its thick pieces and strong, sweet flavor. If you like gas-station jerky this is decent, but others do it better: Tillamook has a subtler smoke flavor that allows more of the beef to come through, and Oberto has less of the sickly-sweet aftertaste. Cattleman’s Cut is quite moist, though not the soggiest we tasted.

Probably the brand of Jerky that’s best known in North America is Jack Link’s, but once you try other brands, the extra-moist easy-to-chew texture starts losing its appeal. Our testers liked the added depth of the pepper flavor, but it’s still cloyingly sweet: Like Cattleman’s Cut and Tillamook, the Jack Link’s recipe has 7 grams of sugar per serving.

This is the most affordable jerky at less than half the price of the premium-brand jerkies we tested. That said, we liked Oberto more.

If you like your meat candy extra tough and with a full helping of sugar, People’s Choice – Original Jerky is tied for the most sugar in this top ten, and it’s almost as dry as the shoe-leather-tough No Man’s Land. The other flavors (it has nearly the same ingredient list as No Man’s Land: garlic, onion, soy sauce, liquid smoke) get lost in the sweetness.

We want to note in fairness that People’s Choice does slice their jerky very thinly (which is ideal when it’s tough) and that there were few crumbs or small pieces in the bag. That’s probably someone’s idea of an ideal jerky. They make a Keto-friendly no-sugar version, but we like the flavor of this sugared version better.