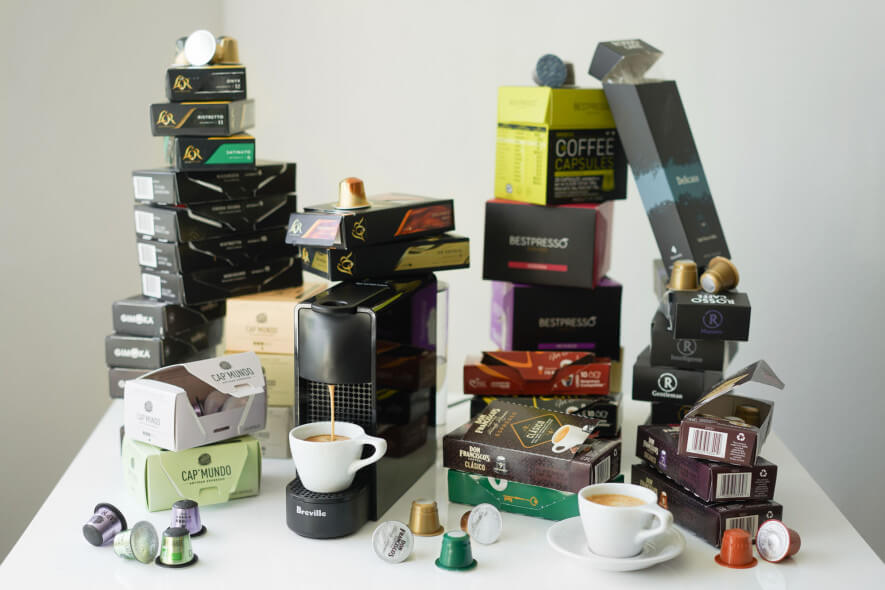 We taste-tested eight popular brands of Nespresso-compatible capsules to determine which brewed the best-tasting espresso that was either equal to or better than the Nespresso brand. Although not all flavors of the brands we selected were highly rated by consumers, the best compatible capsules overall are the French-made, smokey and smooth Cap’Mundo, the Italian-made, richly aromatic Delicitaly and the robust and earthy Peet’s — one of few brands with recyclable capsules. 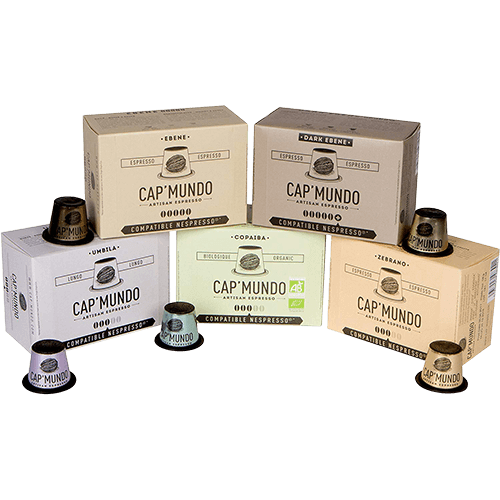 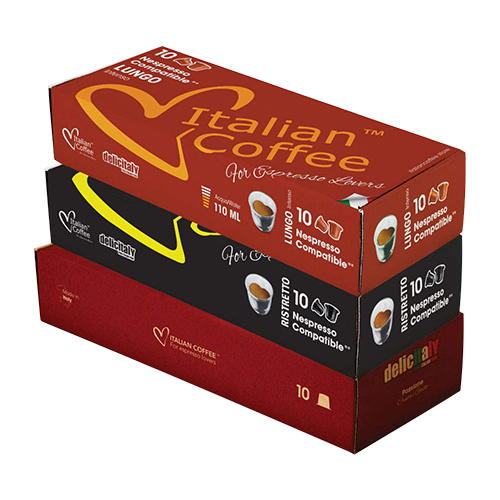 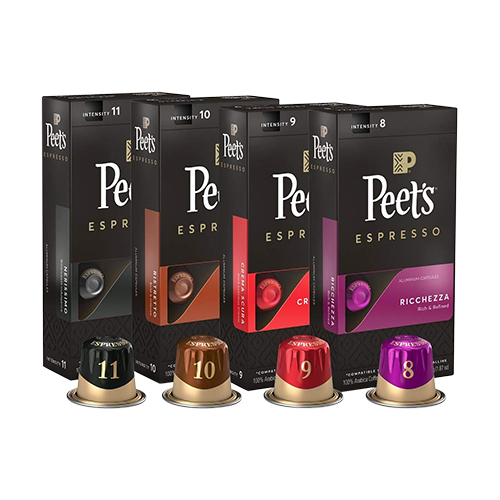 We taste-tested eight popular brands of Nespresso-compatible capsules to determine which brewed the best-tasting espresso that was either equal to or better than the Nespresso brand. Although not all flavors of the brands we selected were highly rated by consumers, the best compatible capsules overall are the French-made, smokey and smooth Cap’Mundo, the Italian-made, richly aromatic Delicitaly and the robust and earthy Peet’s — one of few brands with recyclable capsules.

We researched Nespresso machines and purchased the affordable Breville – Essenza for our testing. The Breville is a compact espresso machine with two settings — espresso (1.35 ounces) and lungo (5 ounces) — and can make six servings before it needs to be emptied of used capsules. A variety pack of Nespresso-brand capsules was included with the Breville, and we sampled them to determine how the compatible capsules compared.

Nestle’s Nespresso capsules are approximately 30% more expensive than non-Nestle brands, which is the primary reason why Amazon users purchase non-Nestle brands. We selected Nespresso-compatible capsules that were not manufactured by Nestle and had the highest ratings on Amazon.

We brewed each flavor of each brand with filtered water at least four times in both espresso and lungo sizes. If the manufacturer recommended a particular size for a flavor, we followed their suggestion, but then tested it again in a different size.

We tasted each flavor without any creamer or sugar and made notes about aroma, flavor, bitterness and balance. If our testers enjoyed a particular flavor, they then added a creamer to see how it held up.

We should also note almost all Nespresso-compatible capsules sold on Amazon are for the Original Nespresso model (like the Breville – Essensa) and will not work in the newer Vertuo models. (Vertuo capsules are dome-like in appearance and come in three different sizes.)

As the only French-made espresso, Cap’Mundo stands out as different. Almost all Nespresso-compatible capsules are given Italian names, some more baroque than others (“Nerissimo”, “Satinato,” for example), but Cap’Mundo’s names evoke exotic locales. This variety pack of five different espressos are all robust and smooth with only a dash of the usual bitterness we tasted in the other capsules we tested.

“Zebrano” has a slightly herbal flavor; it’s less an espresso and more like a strong cup of coffee. “Umbila” didn’t have an espresso’s characteristic crema, but it packs a bold punch. “Copaiba-Organic” tastes somewhat like a strong espresso version of “Zebrano,” herbal with a bit of smokiness. “Ebene” is the most unique of the lot and might not be to everyone’s taste: It has a smoky, woody flavor that our testers found intriguing.”Dark Ebene” is a stronger version and has a little bit more bitterness than the others.Read more…

Cap’Mundo is a small family-run business in Paris (the coffee is roasted in Strasbourg). The family has been roasting coffee since the 19th century, and their coffee is artisanal in the true sense: You won’t find any other Nespresso-compatible capsule like it. Cap’Mundo’s attention to detail also shows in the packaging: Although the capsules are plastic, they are individually wrapped in foil, which helps keep the coffee fresher longer. This delicious and interesting variety pack is reasonably priced at $29.70 for 50 capsules ($.59 per capsule).

Another small-batch company, Delicitaly, is based in Texas but imports food and coffee from Italy, and the aroma of their espresso alone will have you dreaming of (or recalling) Roma. Delicitaly’s “Passione” was the most aromatic of all the espressos we tested, and its taste matched the aroma: smooth and well-balanced with an herbal undertone. Their three-flavor variety pack also includes a “Lungo,” which was very good in the 5-ounce size but phenomenal in the espresso size: intense and chocolaty with no bitter aftertaste. The delicious “Ristretto” tasted of raspberries in the larger size and of cinnamon in the smaller size.

The variety pack is well-priced, we only paid $12.99 for 30 capsules ($.43 per capsule). We wish they sold larger quantities of the variety pack, but since they’re budget-priced, you can purchase two boxes, and it will still cost less than other brands. If you want to purchase larger amounts, each flavor is available in 100 or 200 capsules per box at about $.25 per capsule.

Almost all Nespresso-compatible capsules are made of non-recyclable plastic. Peet’s is one of the very few manufacturers that make recyclable, aluminum capsules. (Nespresso’s capsules are also aluminum.) Peet’s coffee is polarizing: You either love its robust and bold flavor, or you think it tastes burnt. If you’re a Peet’s hater, then this espresso probably isn’t for you. For Peet’s lovers, however, you’ll enjoy its rich and frothy crema and full-bodied dark-chocolate flavor. The four espresso in the variety pack that we tested are Peet’s highest intensity, ranging from 8 to 11.

The darkest, “Nerissimo,” is surprisingly well-balanced, very rich-tasting with an abundance of crema. The mildest, “Ricchezza,” has a fresh-brewed aroma and tastes predominantly of coffee bean. “Ristretto” (intensity 10) is a bit chalky, but “Crema Scura” is medium-dark, smooth and balanced with a berry finish and no bitterness.Read more…

Peet’s is slightly less expensive than Cap’Mundo for 40 capsules, and if you’re ecologically minded and love a bracing demitasse of espresso, this is a great choice.

Don Francisco’s coffee is best known for its espresso, Cafe La Llave, a robust Latin-style coffee, and it is one of the choices in this five-flavor variety pack. As a Nespresso-compatible capsule, Cafe La Llave doesn’t disappoint: It’s an interesting melange of wood smoke and tobacco with very little bitterness.

Another standout is the “Old Havana,” which is less intense, creamy, smooth and easy to drink. “Organico” is similar to Cafe La Llave, but it has a caramel flavor that makes it a pleasant, medium-dark coffee. The other two selections in the variety pack are drinkable but unexceptional. For 50 capsules, it’s reasonably priced at less than $18. If you’re a fan of Cafe La Llave, it’s available in 40-count and 80-count boxes.

Like Peet’s, the L’OR capsules are made of eco-friendly, recyclable aluminum; we wish their espresso was more consistent. Two flavors in the five-flavor variety pack — “Columbia” (intensity 8) and “Ristretto” (intensity 11) — were two of the best espresso we tasted: creamy and foamy with lots of flavor and tang. However, “Onyx” (12) was bitter and burnt, and “Satinato” (6) and “Or Absolu” (9) were medicinal-tasting and too bitter to drink more than a sip.

Rosso Caffe is an Israeli-made espresso with a six-flavor variety pack, a few eccentrically named “Gentleman,” “Intelligente” and “Maestro.” The three medium-roast flavors had good aromas, and although they tasted watered-down as a lungo, they were much better brewed as espresso, tasting of dark chocolate and cinnamon. The light roast had very little flavor, and the two dark roasts were bitter and didn’t taste like coffee.

Bestpresso is a Spanish product, selling 120 capsules in its six-flavor variety pack for an inexpensive $30. Each box has two vacuum-sealed plastic bags of 10 capsules each, which seems a waste of plastic since the bags do nothing for keeping the coffee fresher (already sealed in plastic capsules). What we found shocking was the terrible odor that emitted from the bags when we opened them: They literally smelled like old coffee grounds in the garbage.

Once we got past the odor, a couple of the espresso were drinkable: “Arabica” and “Ristretto,” which tasted lightly of cloves. The other espresso had odd grassy, chemical or chalky tastes and weren’t pleasant to drink.

Gimoka is another bargain brand, selling 100 capsules in its variety pack for $30. The variety pack has five flavors, only one of which our testers found drinkable: the level-5 intensity “Lungo,” which has a smoky taste that’s not unpleasant. Our tasters rated the other four flavors either 0 or 1, commenting on the espresso’s watered-down taste with a weird, chemical aftertaste.