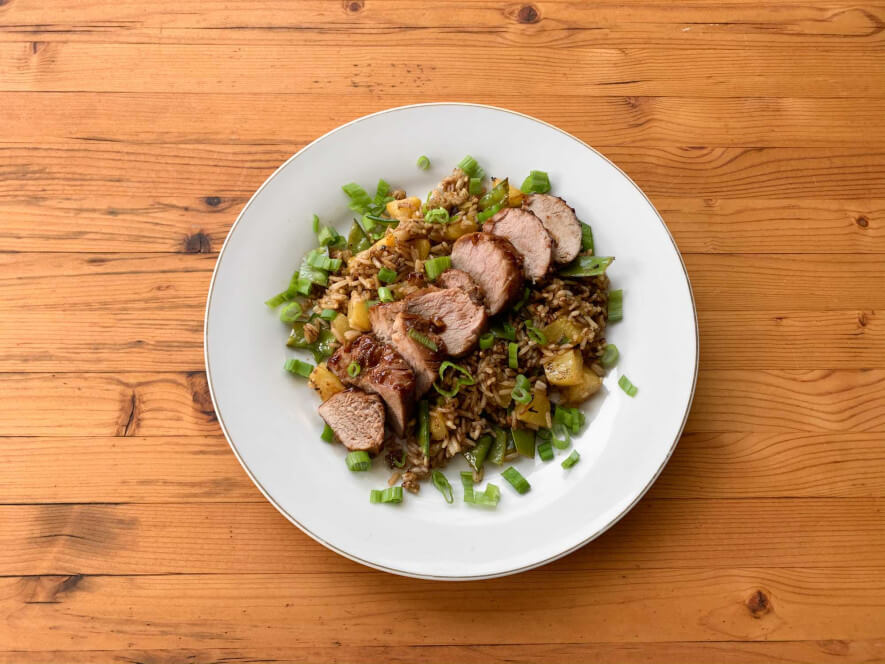 Martha Stewart and her former Living Food editorial director, Jennifer Aaronson, re-teamed to create a high-end meal-kit-delivery subscription service with the German-based company, Marley Spoon. Although their ingredients are fresh and plentiful, both recipes we sampled had imprecise instructions. The meals we cooked were delicious, but if you’re a beginner cook, there’s a chance yours might not turn out as well because of the flawed recipes. 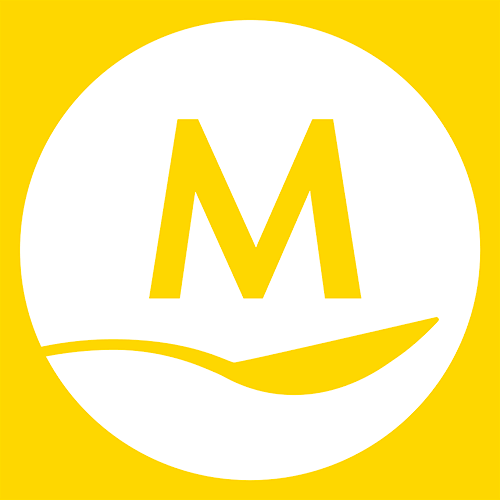 Martha Stewart and her former Living Food editorial director, Jennifer Aaronson, re-teamed to create a high-end meal-kit-delivery subscription service with the German-based company, Marley Spoon. Although their ingredients are fresh and plentiful, both recipes we sampled had imprecise instructions. The meals we cooked were delicious, but if you’re a beginner cook, there’s a chance yours might not turn out as well because of the flawed recipes.

Marley Spoon was founded in 2014 by entrepreneur Fabien Siegel, and initially, the majority of the company’s clientele was in Australia. However, after suffering financial losses in 2016, Siegel approached Martha Stewart in developing a Thanksgiving dinner meal kit.

After initial complaints from consumers that the recipes were too difficult to make, Martha and Marley Spoon pared them down for the following year, and the company began making a profit. This partnership led to their redesigning Marley Spoon’s subscription service with quality ingredients and easier recipes.

In 2017, Marley Spoon launched Dinnerly, a low-cost meal-kit delivery subscription for cost-conscious couples and families, which we also tested and reviewed here.

The Martha & Marley Spoon website is attractive and easy to sign up for the service. Of the other meal-kit-delivery subscriptions we sampled, Marley Spoon had the widest range of choosing weekly meals: two-to-six meals for two or four people.

Once you’ve chosen a plan, you’re automatically brought to delivery details, where you choose which day of the week you want a box delivered. Normally the first delivery is five days after ordering, but at the time of writing, it’s a 10-day wait due to interruptions caused by COVID-19 and increased demand.

The next step is payment, and before you can even review what your recipes are, you must pay the full price for the week. We found this procedure typical of all meal-kit delivery subscriptions. When your payment is approved, you fill out a taste profile, and based on your responses, the first week’s recipes are selected for you.

If the recipes aren’t appealing, however, you can edit the order and choose from 16 other recipe choices that change weekly, each illustrated with a gorgeous photograph you would expect from a Martha website. Marley Spoon has the most alternative recipes to choose from than any other meal-kit subscription. However, many of the meals are carb-heavy with potatoes, bread or rice.

What’s in the box?

The box is insulated with a thick, recyclable paper, and the dry and non-perishable ingredients for each recipe are in separate sealed bags. Two large ice packs sandwich the meats and perishables, such as cheese, mayonnaise (1-ounce packet), fruit and, oddly, a head of garlic.

We bought a meal kit for two recipes for two people. The meats in our box were pork tenderloin (10 ounces) and chicken breasts (12 ounces), both sourced from Marley Spoon’s own brand Land & Sky. There’s almost no information online about Land & Sky, other than their beef is grass-fed, but both meats appeared to be excellent quality. 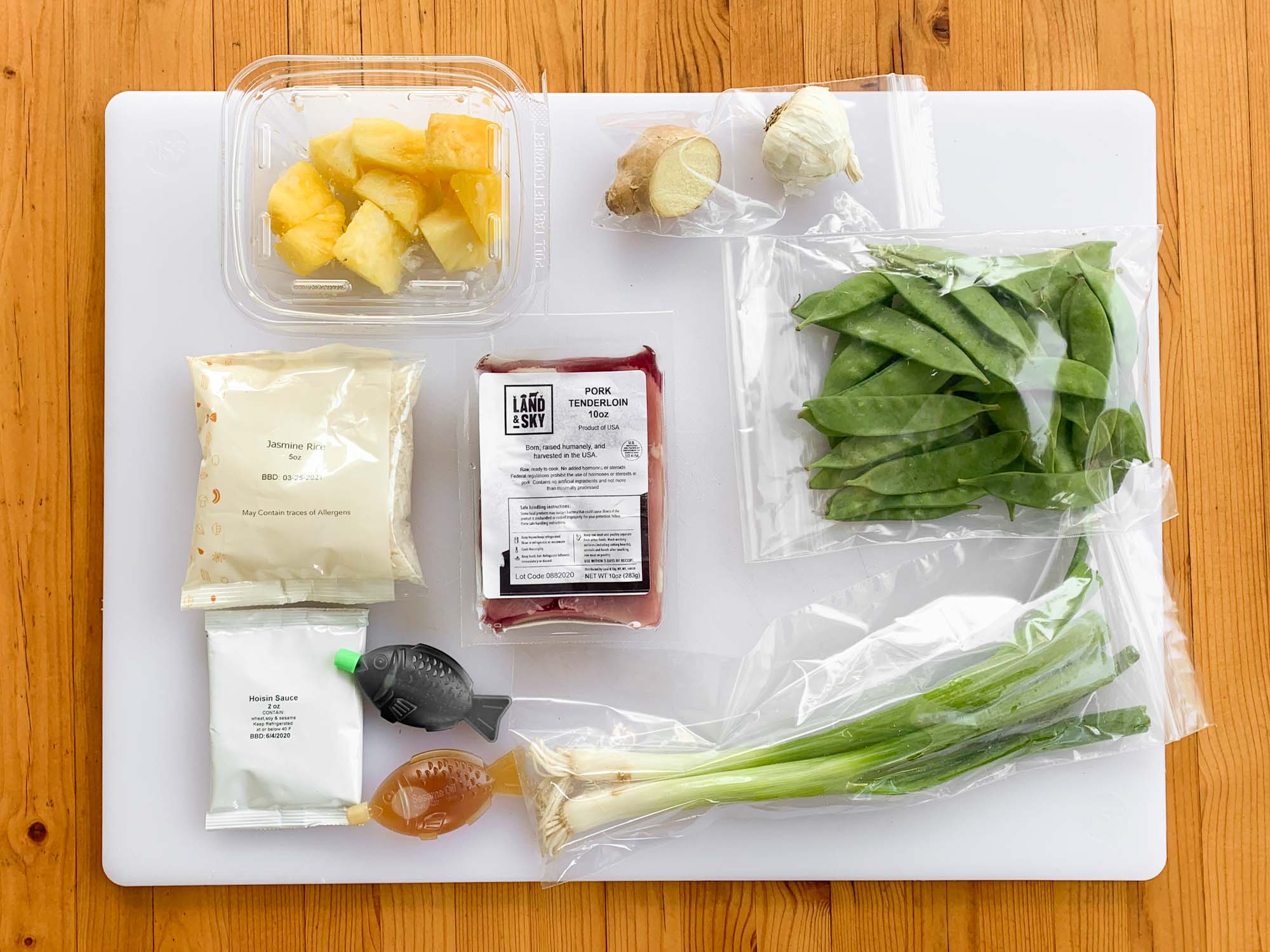 Vegetables were packaged in resealable plastic bags, and fruit (pineapple in one recipe) was in a recyclable plastic container. Sesame oil and tamari come in adorable plastic fish-shaped squeeze bottles. Although there’s too much plastic used, it’s probably unavoidable until there’s a better way of ensuring that shipped food is sanitary.

We were impressed by the freshness and quality of the produce, particularly the two heads of romaine lettuce for our recipe’s Caesar salad, which was bright green and crisp with only a few small brown spots at the stems. The meats were vacuum-packed and showed no signs of leakage. 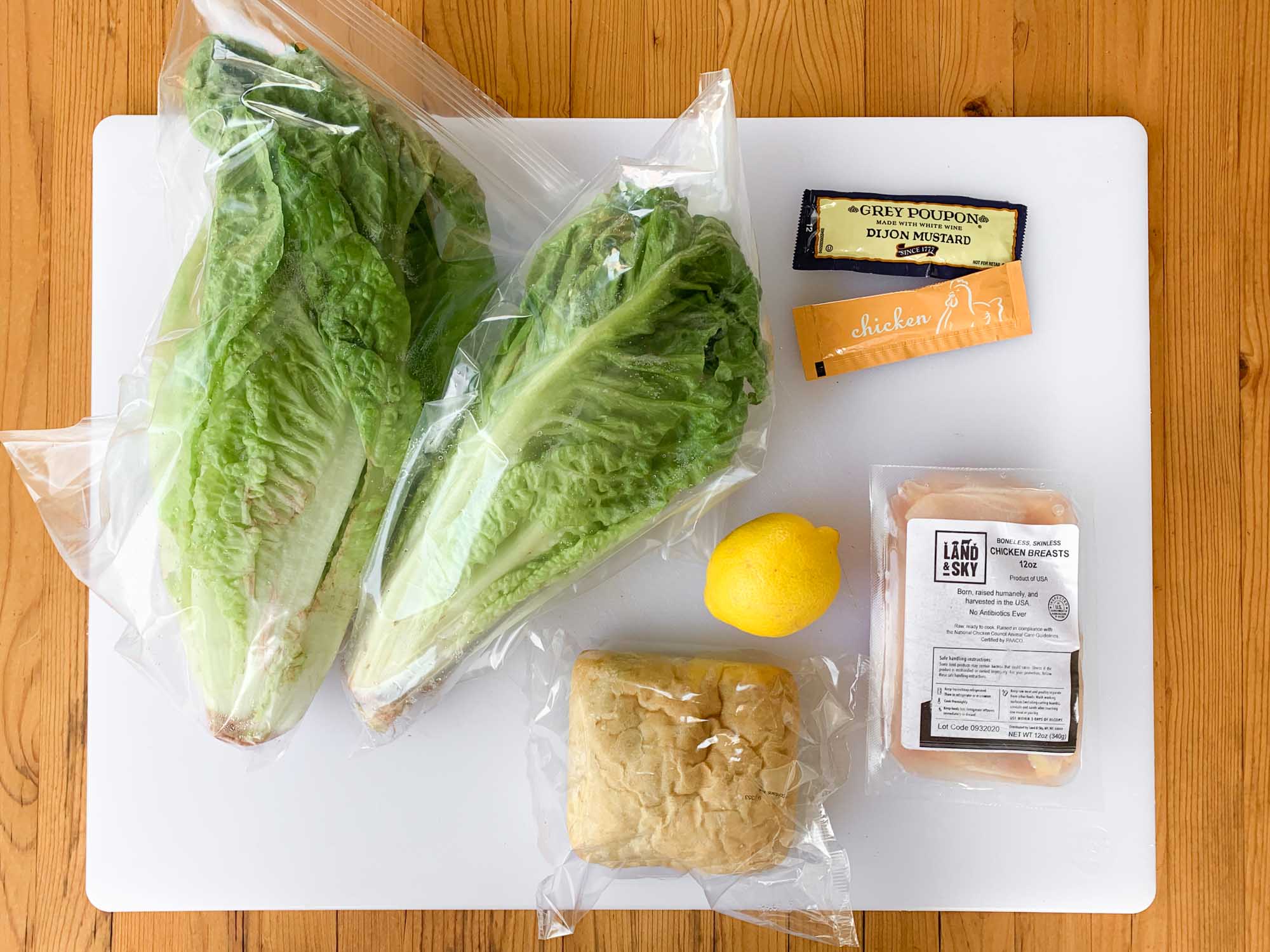 Similar to the recipe cards of competitor Hello Fresh, the Marley Spoon cards have six photos to illustrate each step of preparation. However, we found some of the photos to be unhelpful for someone who is learning to cook. For example, in making the sauce for the Chicken Francese, rather than demonstrate how to deglaze the pan and whisk the ingredients together, the photo simply shows a pan with sauce. Likewise, for the final step of preparing the romaine, the photo just shows the completed meal. 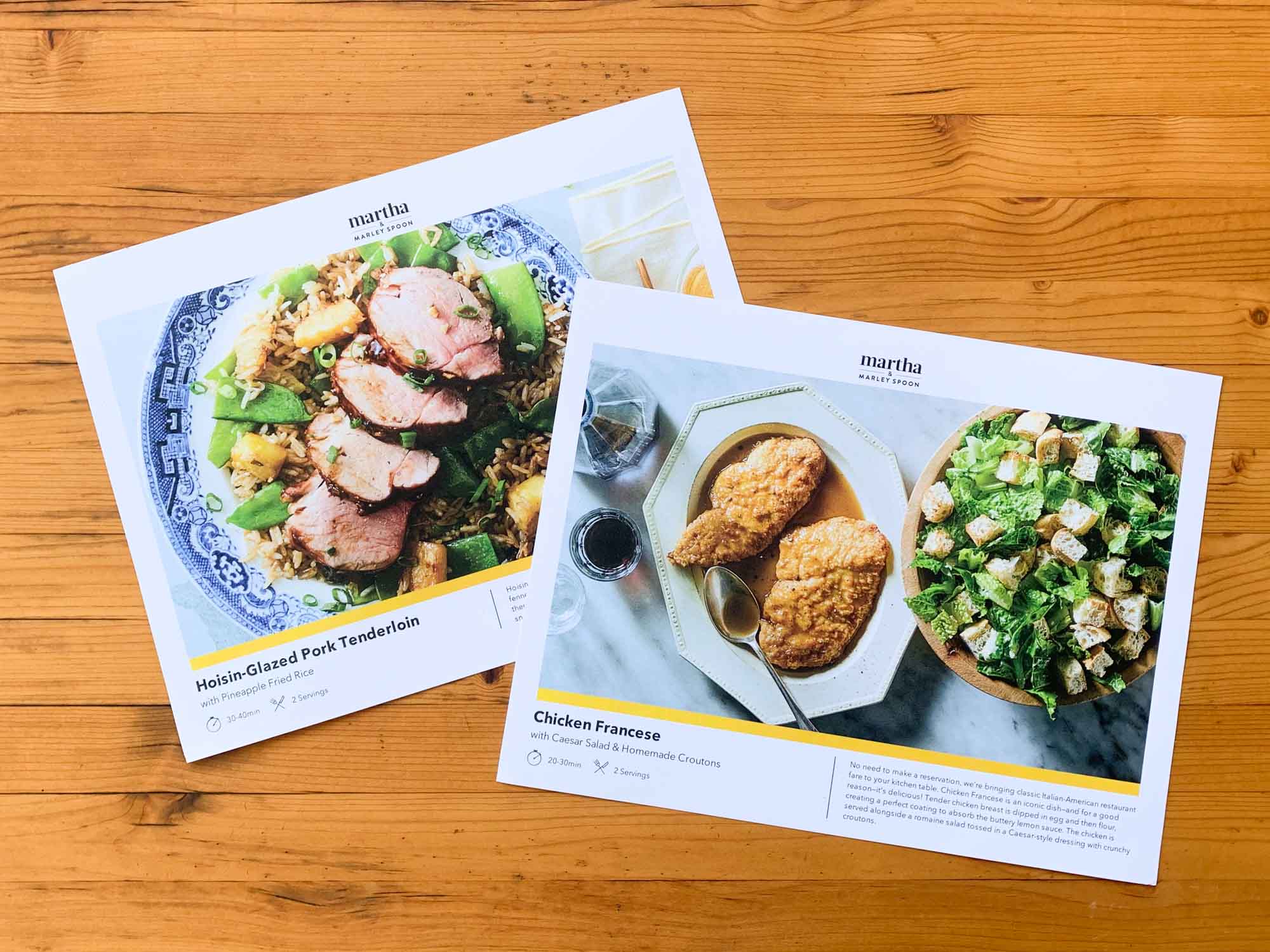 Marley Spoon — and other meal-kit subscriptions — market their product as a time-saving convenience, and so, recipe cards show only six steps. In reality, each step has several steps and at times, they’re time-consuming as we discovered when cooking the two recipes we ordered. Also listed on each card are the cookware, utensils, seasonings (salt and pepper) and oil you’ll need for the recipe.

At the very bottom, you’ll find the recipe’s nutrition printed in tiny print. We were shocked to learn that the Chicken Francese had 870 calories, 47 grams fat and 54 grams carbohydrates per serving.

Both recipes were easy to follow and had accurate time estimates for preparation and cooking. However, each recipe had a serious omission or inaccurate method, which, if you weren’t an experienced cook, could result in a partially inedible meal. 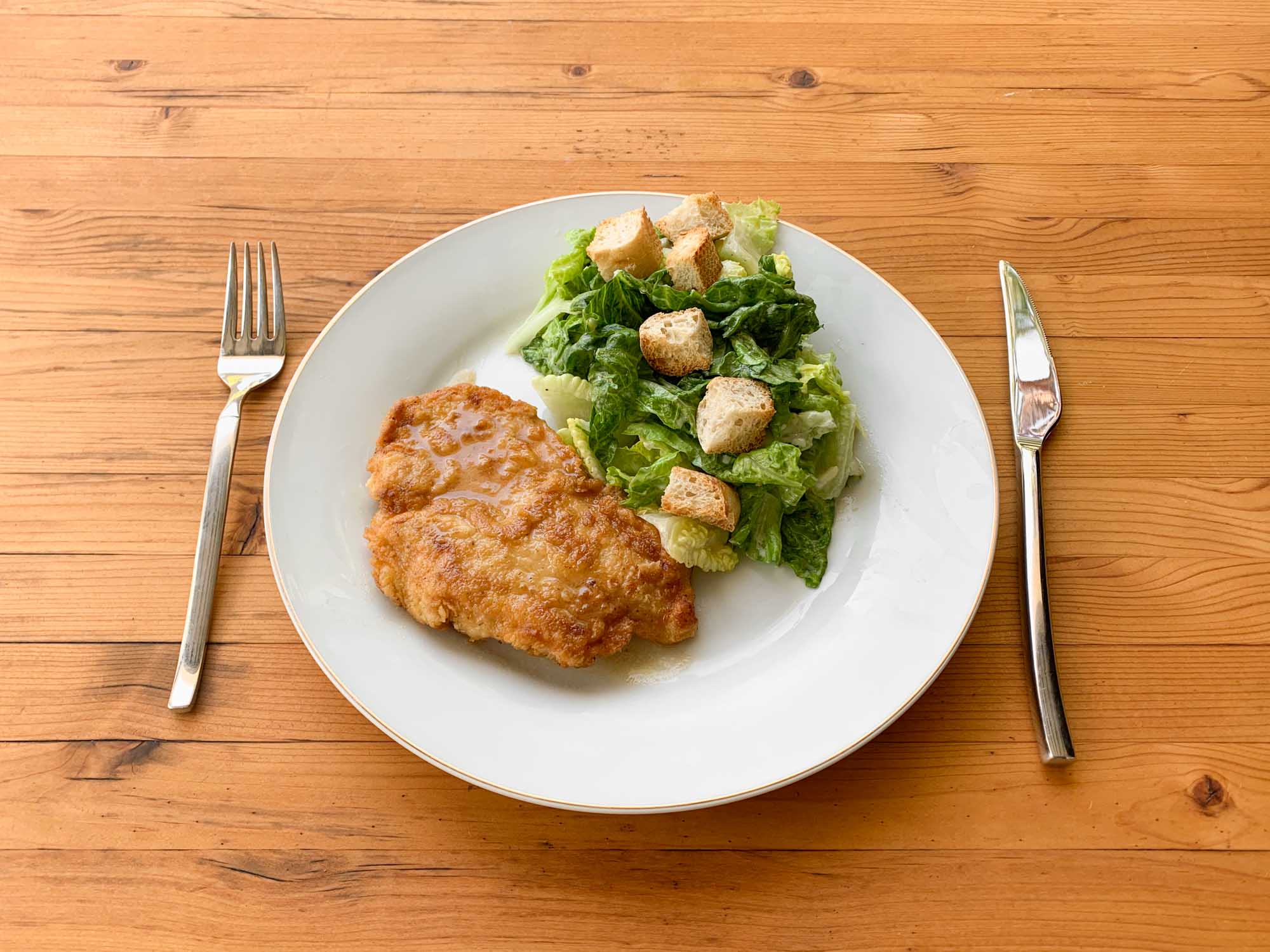 The Chicken Francese with Caesar Salad was one of the recommended recipes for the week we ordered, and its photo of two cooked chicken breasts glistening with a sauce alongside a big bowl of romaine and croutons was certainly appealing. This was not a difficult recipe to make. It consisted of whisking together mayonnaise, Dijon mustard, grated parmesan and oil into a dressing for the salad. A ciabatta roll was cubed and baked, and the chicken was lightly pounded and coated with egg and flour.

At this point, we thought the recipe was pretty healthy. But then the recipe went off the rails. Rather than be baked, the chicken had to be deep fried in oil, but the recipe didn’t indicate what kind of oil other than olive oil, which isn’t the best for deep frying. Once the chicken is fried and drained on paper towels, the next step is to make the sauce by adding chicken broth concentrate, lemon juice and butter to deglaze the pan. However, there was no instruction on the recipe card for draining the oil. Had we not done so, the sauce would have been too oily and inedible.

The Caesar salad was the best part of this recipe: delicious, easy to make and plentiful. The two romaine lettuce heads and the croutons in our kit for two people could easily have served four people. The chicken, though, tasted like fried chicken without the crunch and texture. This is not a recipe we would order again. 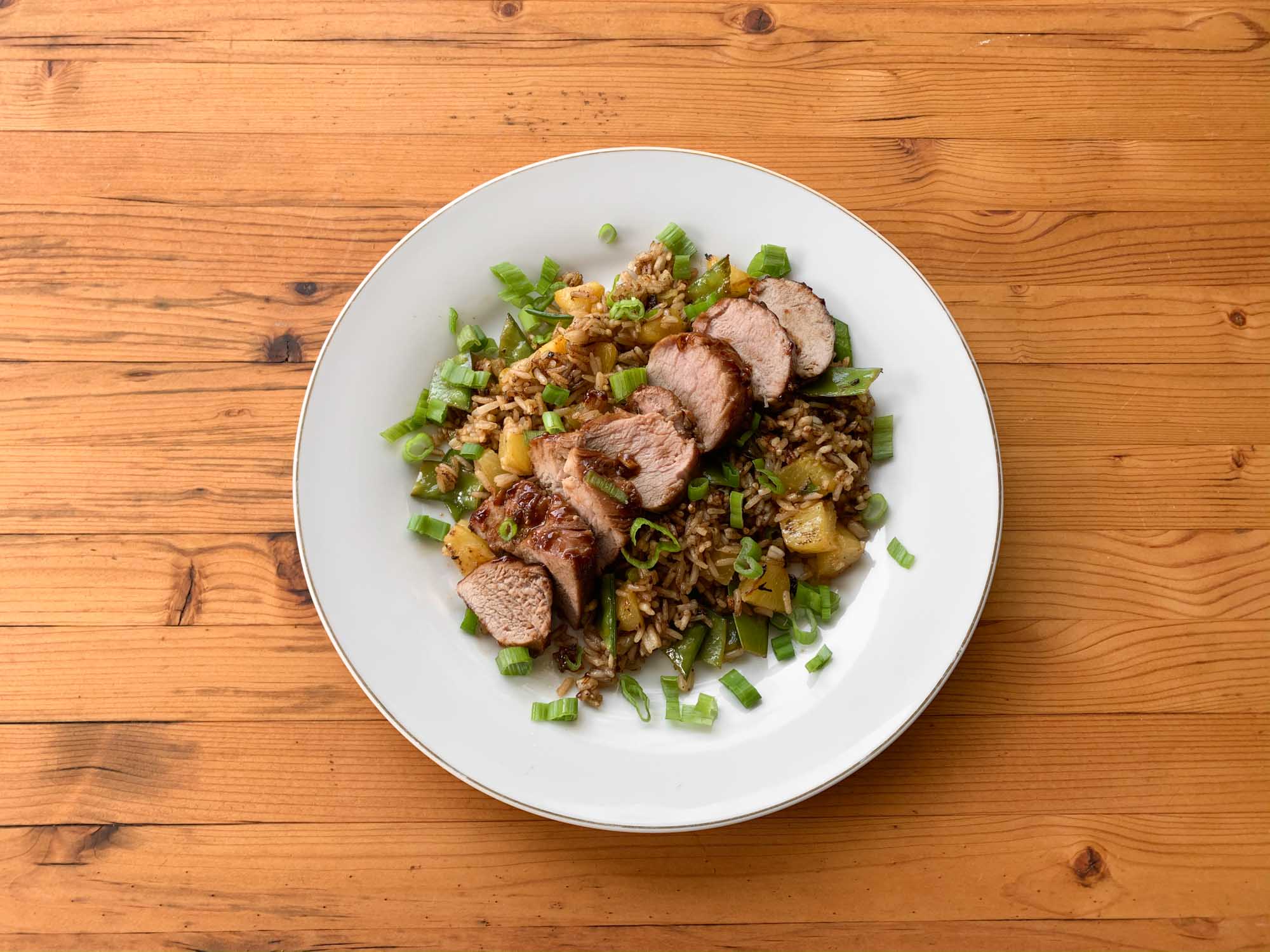 This recipe was also easy to prepare, but the first step in the instructions is a misfire. The side dish is a pineapple fried rice, and so the rice needed to be cooked. For whatever reason, the recipe card instructs “boil the rice (like pasta).”

Fortunately, we’ve made enough rice (including in our review of Marley Spoon’s competitor, Hello Fresh) to know that boiling it would result in a sticky, burned mess in the bottom of the saucepan. The next step is also mystifying: rinse and drain the rice. We knew this method rinses out the starch that causes rice to clump, but this step is always done before the rice is cooked.

The rest of the recipe was very good and easy to follow. The pork tenderloin was tender and delicious, and the pineapple fried rice was crisp and tangy with lots of snow peas and green onions. Calories and fat grams were significantly lower than the Chicken Francese, and as with the Caesar salad, there was enough rice to feed four people or have leftovers for two people. We contacted Martha & Marley Spoon about the inaccurate method for cooking rice, and as of this writing, we have not received a response.

The two-person box is the most popular, but it’s only cost-effective if you purchase three or four recipes per week. Our two-person, two-recipe box cost $49.99, which the website states is $10.25 per portion. When you factor in the $8.99 shipping fee, the actual per-portion cost is $12.49.

As with other meal-kit subscriptions, the more recipes you order, the less the per-portion (not per person) cost will be. For example, the three-recipe kit comes to $10.48 per serving, which is about the same as Hello Fresh’s three-recipe meal kit. The real savings comes when you order the six-recipe kit at $8.63 per serving for a total of $103.67. But that’s a lot of food, and it means you’ll be cooking almost every day of the week.

Like other meal-kit subscriptions, you can skip a week; but be mindful of the new delivery date. Marley Spoon processes your next order five days before it’s sent out, which means if you don’t change the week’s recipes two days after you’ve rescheduled a delivery, you’re stuck with them. If you decide to cancel, you need to do so eight days ahead of time, or you’ll be charged in full for a weekly box.

Since both recipes we tried had an inaccurate step in the instructions, we are wary of trying other recipes in the Marley Spoon collection. It is frustrating, however, because there’s no denying the pristine quality of the meats and vegetables that were sent. We might consider experimenting again and continue the subscription one more week, but it would be a pricey experiment, and there is no guarantee that the new recipes would be better written and edited. 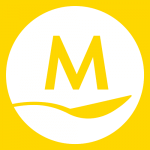 High-quality meats and produce and generous portions are the hallmarks of this subscription. But a beginner cook might struggle with the imprecise recipe instructions.