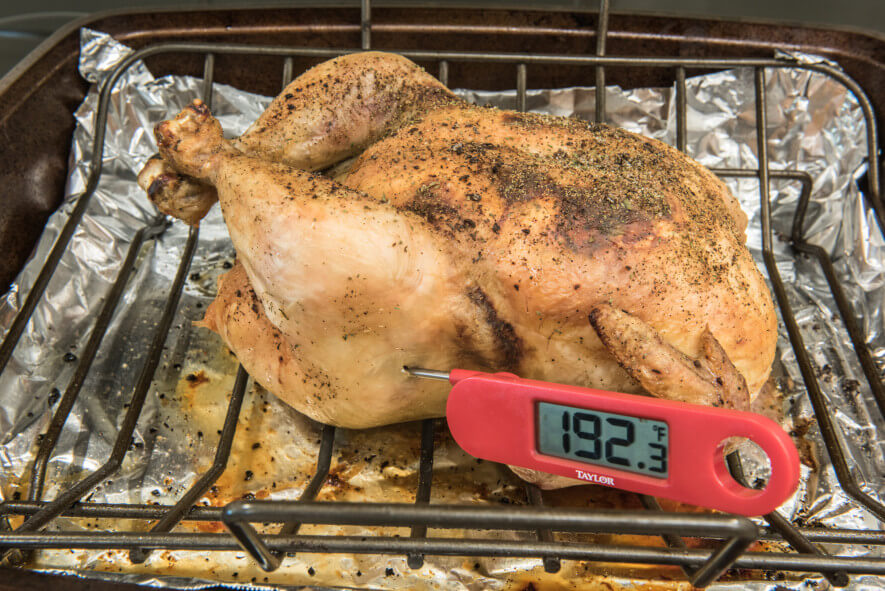 Home > Kitchen > How To Use Meat Thermometers

How To Use A Meat Thermometer

You’ve bought an expensive cut of beef — a standing rib roast, for example — and you want to roast it to medium rare. A restaurant chef can often tell when meat is done by poking his/her finger into it. For the rest of us, however, using a meat thermometer is a better and more accurate way of knowing whether a roast or turkey is perfectly cooked.

Also called a “leave-in” meat thermometer, this is one of the most commonly used meat thermometers. As its name implies, the thermometer is inserted into the thickest part of the meat before it goes into the oven and is left-in while it cooks. This type of continuous-read thermometer is the most inaccurate, since it won’t even begin to register a temperature until it hits 140 ℉, which, for many meats, is past rare or medium-rare. There is also a glass bulb version of this thermometer, which breaks and stains easily from grease.

This is a digital thermometer with a long probe attached to a thin cable. The probe is inserted into the thickest part of the meat, and the cable is thin enough so the oven door can be closed. You can preset this type of thermometer to the desired temperature, and when the meat hits that programmed temperature, an alarm sounds.

Newer models are wireless that send digital readouts to a remote device. The wireless thermometers are also ideal for cooking on a gas grill since they have a higher range of temperatures. 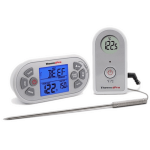 This sturdy probe thermometer can measure up to 700 ℉, which makes it ideal for a grill. Its powerful Bluetooth keeps the ThermoPro connected well past its listed 300-foot range.

An instant-read thermometer — analog dial-type and digital — cannot be left in the meat while it cooks. It’s used to periodically check the meat’s internal temperature before the meat is done to ensure it doesn’t overcook. The analog dial-type needs to be inserted three inches into the meat, and it takes 15–20 seconds to register the temperature. 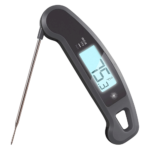 Fast and accurate, the Lavatools has special features like waterproofing, battery-saving and an easy-to-read, rotating LCD-backlit screen.

Very fast and accurate, a thermocouple digital thermometer can give a reading in as little as two seconds. The tip only needs to be inserted ¼ inch into the meat, which makes this type of thermometer the best choice for thin cuts of meat.

How to use a meat thermometer 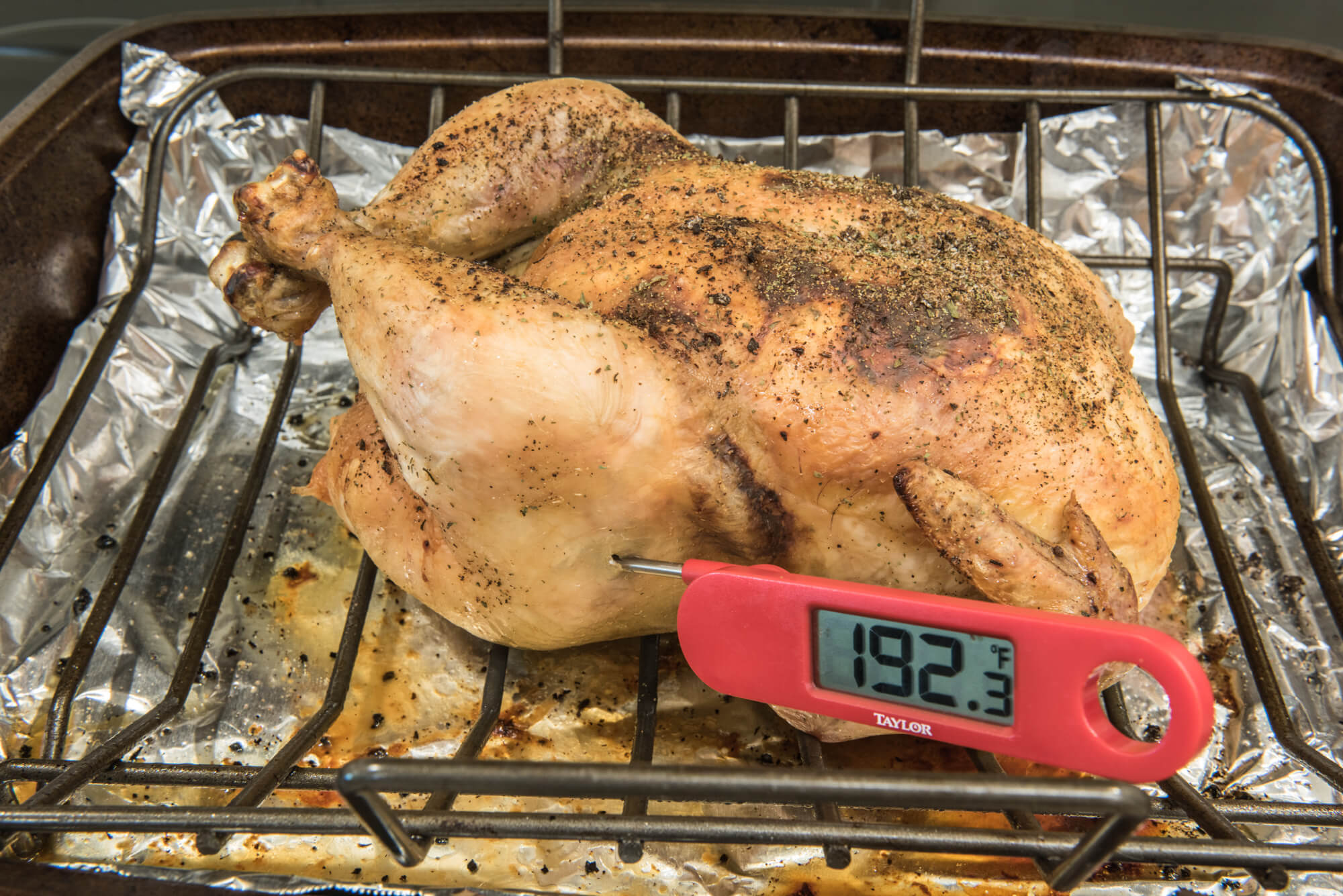 First, for whatever you’re cooking, you’ll need to know if your oven is properly calibrated, so check your oven’s temperature with an accurate oven thermometer.

If you’re using a probe thermometer, insert the probe into the center of the meat, making sure it doesn’t touch any bone. Set the temperature, and when the alarm sounds — using insulated gloves or a potholder — remove the probe and check other areas to ensure they have cooked evenly and are at the desired temperature.

For an instant-read thermometer, you’ll want to begin checking the meat or poultry temperature before it’s done: about 30 minutes for a large turkey or roast and 5–10 minutes for thinner cuts, like burgers and steaks. Again, to get an accurate reading, avoid measuring temperatures near the meat’s bones.

Measuring a turkey’s temperature can be tricky, since the legs and thighs cook slower than the breast. Insert the thermometer into the meaty part of the turkey’s (or chicken’s) thigh, making sure the probe doesn’t touch bone. Take several readings of different meaty areas, including the thickest part of the breast. 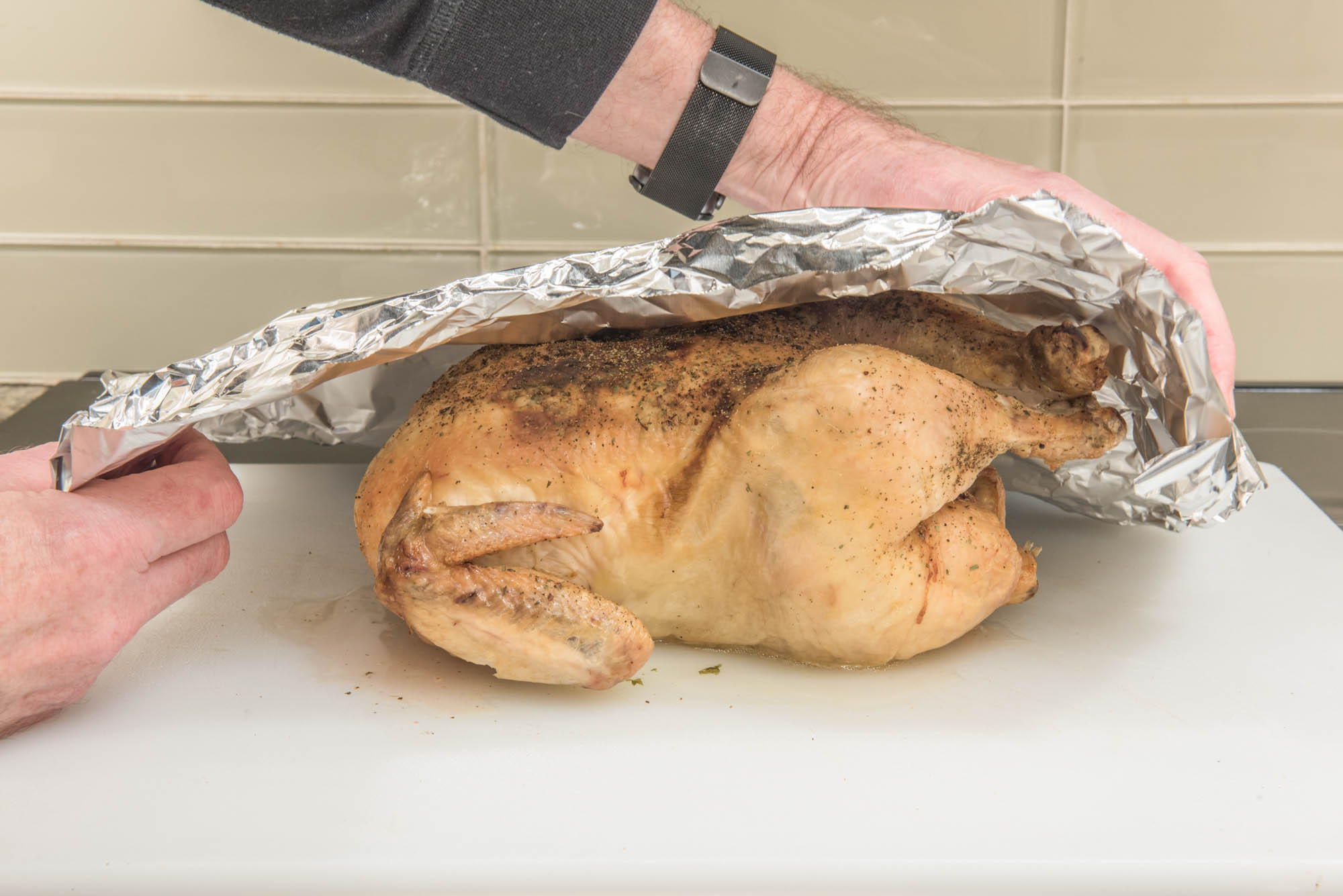 Remember: You want to remove the meat or poultry from the oven when it is 5–10 degrees less than the desired-doneness temperature. (See our chart for meat and poultry doneness temperatures.) The meat will continue to cook when it’s removed from heat.

Called “carryover cooking,” the meat’s internal temperature will continue to rise 5–20 ℉ for 15–30 minutes out of the oven (or off the grill). A large roast can take up to 40 minutes to hit optimal doneness, and a turkey can take up to one hour. Larger cuts, turkeys and chickens should also be tented with aluminum foil so they stay hot when you’re ready to carve them.