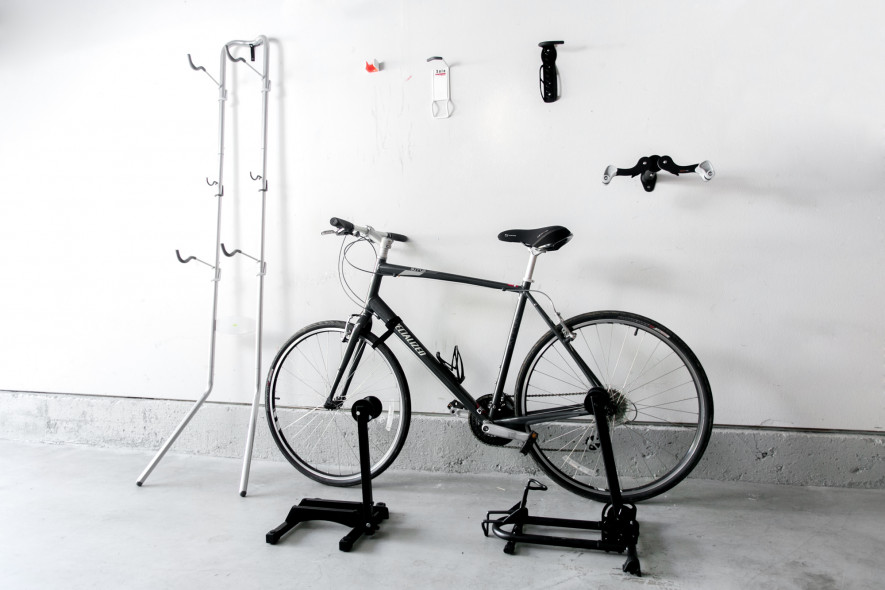 We tested seven highly rated bicycle racks to find out which one is the best bike rack for the home or garage. The Delta Cycle – Michelangelo is the best overall for most living spaces with its sleek, minimalist design that can suspend two bikes without any tricky installation. The best free-standing bike rack is the Bike Hand – Parking Rack, a sturdy and portable rack that can be set up anywhere. If you’re looking for a wall-mounted bike rack for the garage, the Ibera is a horizontal rack with adjustable arms that can hold your bike at several angles. If your floor space is limited, we recommend the Racor – B-R1 for hanging your bike vertically. 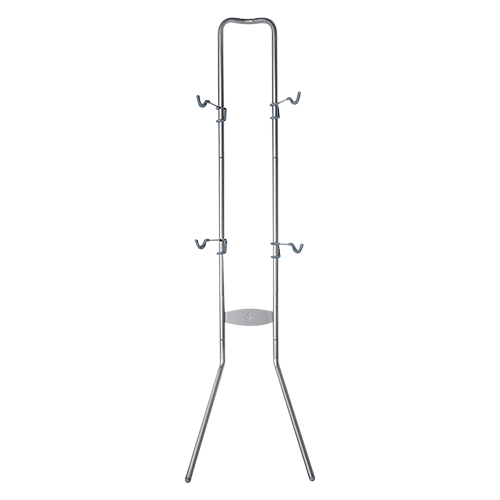 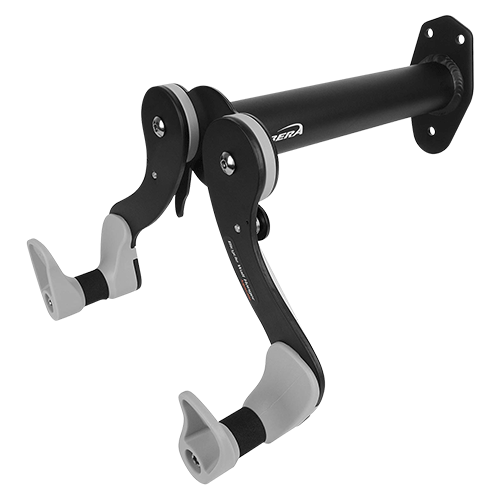 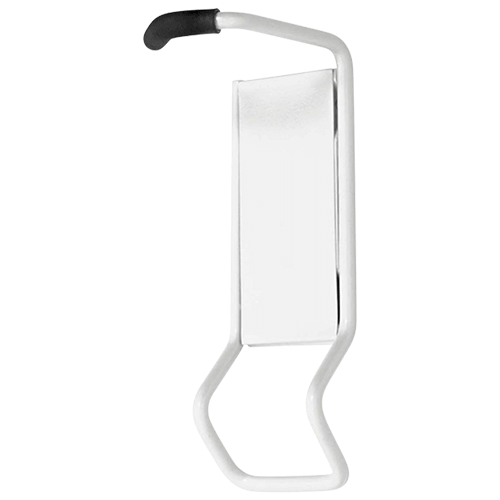 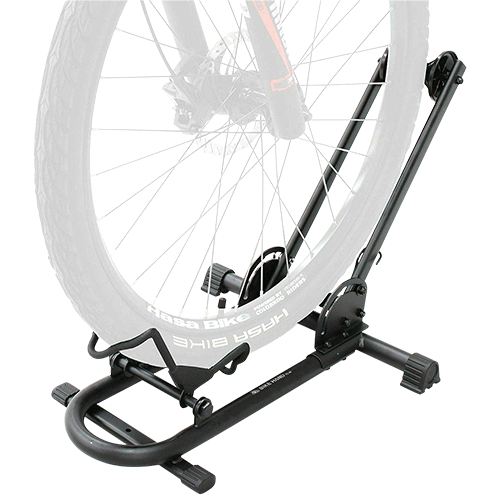 We tested seven highly rated bicycle racks to find out which one is the best bike rack for the home or garage. The Delta Cycle – Michelangelo is the best overall for most living spaces with its sleek, minimalist design that can suspend two bikes without any tricky installation. The best free-standing bike rack is the Bike Hand – Parking Rack, a sturdy and portable rack that can be set up anywhere. If you’re looking for a wall-mounted bike rack for the garage, the Ibera is a horizontal rack with adjustable arms that can hold your bike at several angles. If your floor space is limited, we recommend the Racor – B-R1 for hanging your bike vertically.

A wall-mounted bike rack is ideal for small living spaces, since the bike’s footprint, when elevated, is reduced to the width of the bike’s handlebars (horizontal mount) or the diameter of the tires (vertical mount). Installation involves:

Although several of the bike racks we tested included plastic drywall anchors, we strongly recommend that you do not install a bike rack into drywall alone: Even with the best drywall anchors, the shock of picking up and replacing the bike will eventually crack the drywall, and it will all come crashing down.

For a vertical mount, we also recommend purchasing separately (they’re not included with a vertical-mount bike rack) a wall plate that holds the back tire and prevents it from leaving scuff marks on the wall.

There are two types of free-standing bike racks: a parking rack and a gravity rack.

A parking rack is great for storing your bike in a garage or a larger living space and doesn’t require installation. It’s a folding metal frame that opens up, releasing a vertical arm that has a large hourglass-shaped spindle. The front bike wheel is rolled into the frame until the tire is held in place by the spindle. Although a free-standing rack is portable, convenient and easy-to-use, they can wobble and tip over when accidentally bumped.

A so-called gravity rack is designed to support one or two bikes upright in a horizontal position. Installation involves nothing more than screwing its ladder-like frame together and adjusting its arms from which the bike hangs. The rack simply leans against any wall. If you live in an apartment or rental home, and your landlord doesn’t allow holes to be drilled into walls, a gravity rack is your best option.

This type of bike storage is popular with people who have several bikes they need to store in their garage but have no floor space. It consists of two pulleys — positioned over the bike seat and handlebars — that are screwed into ceiling joists. Two double hooks are attached to the pulleys, which are then lowered, attached to the bike’s seat and handlebars. Pulling on the pulley ropes elevates the bike up to the ceiling. We did not test this type of bike storage because our tester’s garage did not have high-enough ceilings.

Whichever way you decide to hang your bike, always keep your tires fully inflated with one of the best bike pumps that we recommend. After installing and testing, we’ve ranked products below as the best bike rack for the home or garage.

The Delta Cycle – Michelangelo is a gravity bike rack that can suspend two bikes. It’s extremely easy to assemble, taking us 10 minutes to connect its ladder-like steel poles with the six included bolts. Four adjustable arms with rubberized hooks are attached, and the Michelangelo can then be leaned up against any wall. The top section of the rack has a rubber cushion that protects the wall from being scuffed. You lift the bikes onto the hooks, and like magic, they suspend in mid-air. Another great feature is two smaller hooks for hanging bicycle helmets are also included.

Assembled, the Michelangelo stands 7 feet tall and its splayed legs are only 20 inches wide, which makes this bike rack ideal for apartment dwellers. Because the top hooks need to be positioned high to allow room for the lower bike, a shorter person might have trouble lifting their bike up onto the upper rungs. The Michelangelo is reasonably priced for such a well-designed bike rack. For larger spaces, a four-bike model is available; two bikes hang on either side of the extra-sturdy rack.

Most wall-mounted bike racks hang a bicycle vertically, but the Ibera is one of the few that hangs a bike horizontally. The Ibera was the easiest of the wall-mounted racks to install: A steel tube attached to a metal plate is screwed into the wall with three screws, and an outer tube with hanger arms is slid on. The tubes can be adjusted to accommodate almost any bike width and frame. The arms are positioned at a 45-degree angle, and they can be adjusted to tip your bike forward or backward. If installed properly — into a stud — it can hold up to 40 pounds.

It has a couple of other thoughtful perks worth mentioning: The arms are padded to protect the bike frame from being scratched, and there’s an extra-long Velcro strap for tying the bike’s front wheel to the frame to keep it in a horizontal position. The Ibera is advertised as suitable for any living space, but you would be giving up significant wall space to accommodate the entire length and width of your bike. For our tester’s garage, which had minimal storage space, the Ibera was an excellent option.

There are many vertical bike racks on the market, but the Racor – B-1R has a few design features that make it a better choice. Once we measured the length of the bike from the top of the tire and located the garage wall’s studs, installation took five minutes. The rack is an enamel-coated steel panel with a slightly curved, rubberized hook from which the bike hangs by its front tire. Other vertical bike racks have a more severe curve, and it’s difficult to maneuver the tire onto the hook.

The Racor also has a raised V-shaped channel that holds the front tire in place; a feature other vertical racks don’t have. The bike was easy to hook up unassisted, and it felt secure on the wall. The Racor would be your best bet if you need to free up floor space in either your garage or home.

Right out of the box, we knew we had a winner with the Bike Hand – Parking Rack. This is a sturdy and well-made steel frame that unfolds in a second by pushing a small knob, which releases its vertical arm. That’s pretty much it for setup. The front wheel of the bicycle is guided into the frame, automatically locks into place, and the bike stands on its own.

This really is a product that’s “so easy a child could do it,” and many Amazon reviewers comment that’s the reason why they purchased it. The Bike Hand has four hard-rubber feet that keep the rack steady on a cement or wood floor, and we also found it to be equally secure on carpet as well. The Bike Hand is affordably priced and can hold any size bike tire. It can be used in the home, garage and taken anywhere that doesn’t have a rack to park your bike.

The Feedback Sports – RAKK is very similar to the Bike Hand – Parking Rack, but it’s smaller and more lightweight, which made it more prone to tip over. It’s about half the price of the Bike Hand, but we found it tricky to unfold and less sturdy.

To open the RAKK, a small button underneath the spring mechanism needs to be pushed and the vertical arm lifted simultaneously. Too many times, our fingers got pinched by the spring, and the vertical arm simply would not budge. Once we did unfold it and guided the bike into the frame, the bike was unsteady, and we were not confident it would stay in place, especially if bumped.

The Dirza – Vertical Bike Hook was the most difficult to install. Its curved hook is positioned over the top screw hole, so it was hard to maneuver the screwdriver to get any leverage. Its cheap hardware stripped easily, and even when we used better (and longer) screws, it took us much longer to securely install the Dirza than it did the other wall-mounted racks.

As if the installation hassle weren’t enough, we had trouble hooking the front bike tire onto the sharply curved hook, and once hooked, the bike swayed back and forth at the slightest touch.

The Hornit – Clug would be a nifty, minimalist way to hang your bike if it actually worked. The company’s website is very specific about measuring your bike tire before ordering the product. We followed the instructions — our tires measured 32 millimeters — and ordered the “Roadie” (23-32 mm). When we tried to fit the Roadie Clug, it was too narrow. The width of the c-shaped Clug can’t be adjusted, so we returned it and bought the next size up for “Hybrid” (33-43 mm).

Installation was a cinch; trying to hang the bike was torture. The bike needed to be rolled up the wall vertically — leaving stripes on the wall — and the front tire guided into the Clug. Although our bike tire fit, the Clug was too loose to hold it.