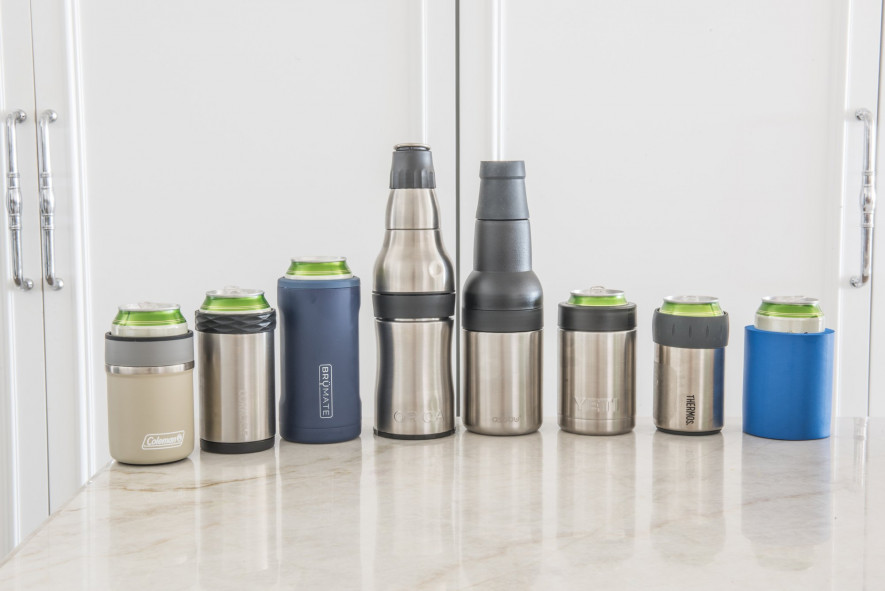 After comparing eight top-selling beer coolers in an all-day insulation test, we found that the best beer koozie overall is the Thermos – 2700TRI6. This design is easier than most to load and drink from, and if you finish your drink within an hour you still get top insulation performance. Our runner-up is the ORCA – Bottle and Can Cooler, which has a slight edge in insulation and versatility without being awkward to hold like some designs are. If you want your can to stay cold for as long as possible, the BruMate – Hopsulator Trio includes an ice pack that can actually keep your drink chilled all day. 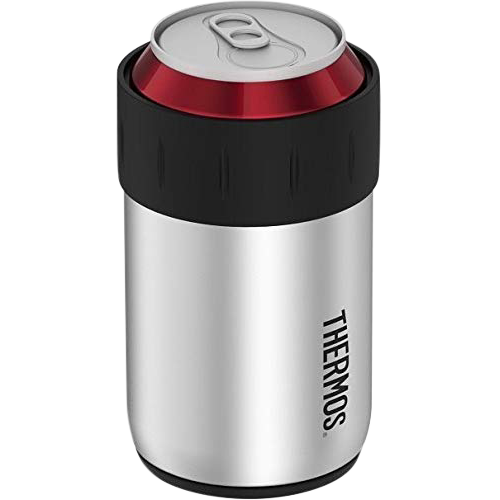 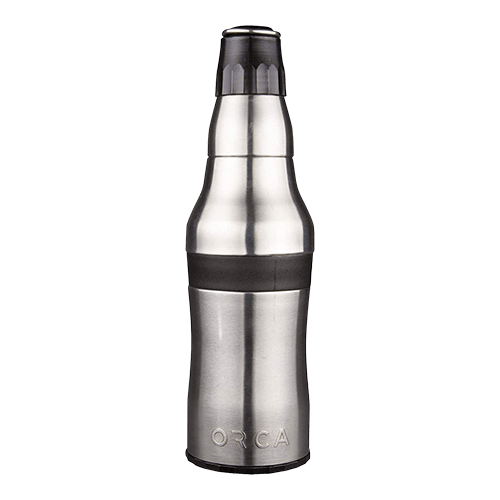 Bottle and Can Cooler 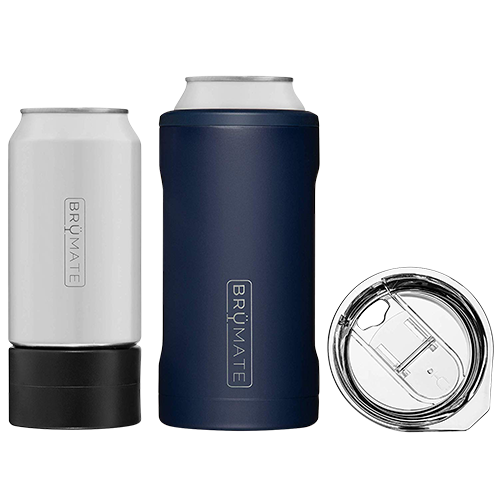 After comparing eight top-selling beer coolers in an all-day insulation test, we found that the best beer koozie overall is the Thermos – 2700TRI6. This design is easier than most to load and drink from, and if you finish your drink within an hour you still get top insulation performance. Our runner-up is the ORCA – Bottle and Can Cooler, which has a slight edge in insulation and versatility without being awkward to hold like some designs are. If you want your can to stay cold for as long as possible, the BruMate – Hopsulator Trio includes an ice pack that can actually keep your drink chilled all day.

But while those containers all separated themselves in performance based on how wide or narrow the neck of the container was — a wider opening always lets more heat in or out — these insulated beer coolers have to insulate the same wide-mouth shape to allow a 12-ounce can to fit neatly inside. And once you’re done with that cold beverage, recycle the empty can in our recommended can crusher.

We expected insulation performance to be similar, and it was: The difference between best and worst vacuum-insulated beer koozies in the first hour was only 2.2 degrees Fahrenheit, and only grew to a 6-degree spread after two hours.

So, we don’t think insulation should be your first consideration. Here are some other features that you should consider to guide your decision: 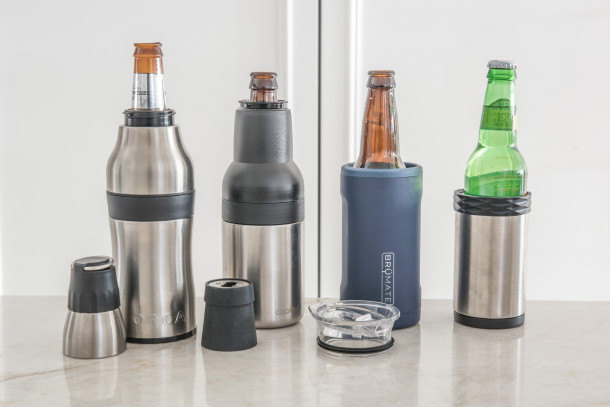 Options for other containers: Four of the designs we tested are specifically designed to hold bottles as well as cans, and many have just enough room to hold a larger pint-size can as well.

Ice packs: Corkcicle and BruMate include a removable gel-filled puck you can throw in the freezer before a day at the beach. These accessories make a difference if you’re only drinking one beverage, and you don’t have some other way to chill it in the hours before your happy hour begins. This ice pack can’t keep a six-pack cold on the way to the beach the way an insulated lunch bag with more ice will.

Drop-in loading design: Most coolers in this lineup use a threaded collar that slips over your can to secure it in the cooler. That’s not especially difficult to manage, but it might collect sand and dirt over time, and designs that just use rubber grips to hold the can in place are almost just as good for insulation and security.

Lids: Most of these koozies are usable as a small insulated tumbler when you’re not tailgating, but only one, the BruMate – Hopsulator Trio, came with a lid.

After we scoured the internet for reviews and testing demonstrations, we came up short on hard facts about real differences between the performance of popular can coolers. So, we purchased eight of the top-selling designs and tested them ourselves. After a week of drinking perfectly chilled beverages and an all-day insulation test, these are our picks for the best beer koozie, starting with the top pick overall:

The Thermos – 2700TRI6 lives up to the heritage of its brand, and it’s also the least-expensive koozie we tested that kept our beer truly cold for a full three hours after opening. To top that off, it’s also one of the most comfortable to hold.

The one thing we didn’t like about the Thermos is that they use extra-tenacious adhesive for the promotional label that’s stuck on the side when you buy it. We tried to remove it with soap and alcohol, but you’ve basically got to scrape this stuff off. (See the photo above.)

ORCA - Bottle and Can Cooler

The ORCA – Bottle and Can Cooler is a two-in-one beer koozie from a brand that has built a reputation for providing less-expensive alternatives to the hyper-expensive coolers and insulated drinkware. It’s not unfair to say they’re copying YETI, but at least in this case they’ve gone in a new direction.

If you’re just as likely to bring bottles as cans on your outings, this design has you covered. The bottle topper also screws into the bottom of the tumbler to make an awkward rocket-booster-shaped stand. However you use it, the ORCA will keep your drink very cold and it’s easier to hold the sculpted sides than some other coolers.Read more…

ORCA also includes a fake plastic beer bottle with a pop-open bottom that holds stickers and a marking pen for customization. That’s an interesting bonus, but it’s all non-functional.

If you want a premium drink insulator strictly for keeping a can cold all day while you wait for work to end, the BruMate – Hopsulator Trio gives you the added option of freezing a small plastic insert to keep underneath the can. The extra heat-absorbing power doesn’t make a difference if you’re opening and drinking your beverage right away, but after 10 hours the BruMate had a 9-degree advantage over the YETI, which was the best insulator with no ice.

The BruMate is sized just right to hold standard cans or bottles, and there’s also a lid included for those times you want to use it as a cup.

This is the result you’ve all been waiting for, and yes, the YETI – Rambler Colster did win our insulation test. With a temperature rise of only 12 degrees over three hours, and 27 degrees over ten hours, the YETI had the coldest beer that didn’t have the benefit of an ice pack.

The YETI is just a big cylinder, though, without any design considerations for grip, cup holder compatibility or ease of use. The ORCA and BruMate both have sculpted side walls to make gripping easier, and the Thermos fits in more cup holders without giving up too much insulation.Read more…

YETI isn’t actually the most expensive on this list, but they’re not offering anything other than a slight edge in insulation performance to distinguish themselves. The pack-in bonuses include stickers and a promotional gag: an empty 12-ounce “can of worms” that could reasonably be used to stash things at the beach — though the branding is kind of a giveaway.

Asobu - Bottle and Can Cooler

Like the ORCA, the Asobu – Bottle and Can Cooler handles a wider array of beverage containers than most other options. On the plus side, if you’re drinking from a bottle this model has a top cap that actually seals the mouth when you’re not sipping. The insulation performance is also very good. It’s not all good news, though, since the awkwardly designed threading on the retaining ring section can get in the way when you’re sipping from a can. If this were a less-expensive package we would be more forgiving, but this is the most expensive can cooler we tested.

The Coleman – Lounger shares many strengths with our top pick, the Thermos. It’s slim, and cans drop in without any cumbersome threaded rings. The price is also good. Sadly, the insulation performance was just poor enough — 18 degrees gained after three hours, 30 degrees after 10 hours — that it’s not a good pick in this lineup.

From the brand that focuses almost entirely on keeping your booze cold, the Corksicle – Arctican is one of the few designs that allows you to freeze an ice pack to keep your beverage colder for a longer period. Sadly, this koozie let in more heat than other designs, so any difference the ice pack made was negated. The slim shape and grippy silicone ring were nice, and Corksicle includes a felt sleeve so you can slip in a bottle without it rattling around, but that’s not worth paying double the price of our top pick.

We looked around for the best-insulating foam koozie we could find to serve as a control for these tests, and the Pinnacle Mercantile – Can Cooler fit the bill at a good price. These come in a six-pack for less than $15. At the two hour mark this foam kept our drinks 5 degrees colder than not using a koozie at all, but if you’re pulling your drink out of a cooler and finishing it in less than an hour you might not notice the difference without using a thermometer. These feel a bit thick in our hands, but they’re not any more difficult to hold than the YETI.