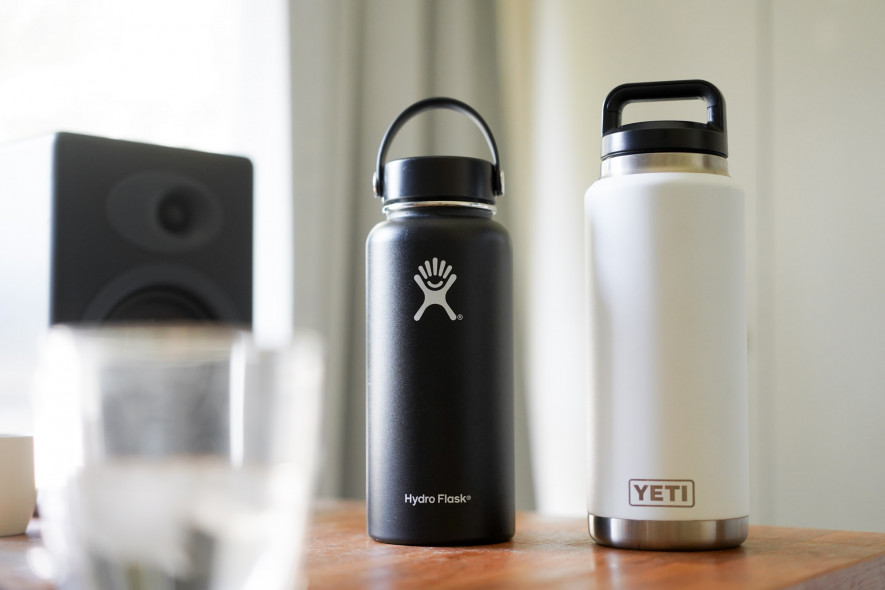 Hydro Flask vs Yeti: Which Is Better?

We’ve been testing water bottles, travel mugs, and other beverage containers for four years, and the comparison people are always asking about is YETI vs. Hydro Flask. YETI is still very well-known for their insulated tumbler, but we put their newer insulated Rambler water bottle and the popular Hydro Flask through their paces to see which of these brands really puts more into their insulation engineering.

We also tested the less-well-known narrow-neck Klean Kanteen bottle, which performs better in insulation tests because of the smaller opening letting less heat in or out. It’s also preferred by some of our testers because they feel it’s easier to drink from.

We filled a large stockpot with water and dumped in about 4 pounds of ice from a handy portable ice maker. We let the ice melt, since it soaks up extra heat when it melts, and it’s hard to ensure there isn’t more of that thermal capacity going into one bottle or another. If you’re actually trying to keep a drink cold for 24 hours, pack in as much non-melted ice as you can.

We measured the temperature of the water over the course of 40 hours. The peak outdoor temperature was 94 degrees Fahrenheit, and the bottles were all in the sun for about an hour. Overnight lows were around 73°F.

There are two control subjects in this test group: An un-insulated stainless steel klean kanteen, a YETI Rambler Insulated Tumbler with an even larger non-sealing lid than the wide-mouth bottle.

As expected, the bottle with no insulation tracks very close to ambient temperature after just two hours. (That’s why it dips overnight and rises during the second morning.) Also no great surprise after past tests, the Klean Kanteen with its narrow mouth managed to beat the other insulated bottles.

What was a bit of a surprise is how poorly the YETI tumbler performed when the sun hit in the morning. You can see that the tumbler is insulating well on the first day, but the large, thin plastic lid is clearly a liability when it comes to soaking up solar heat.

The other surprise was the Hydro Flask, which starts to gain significantly more heat than the other two bottles after the third hour. By the middle of the second day, the difference was about 7°F compared to less than 1°F between the other two. 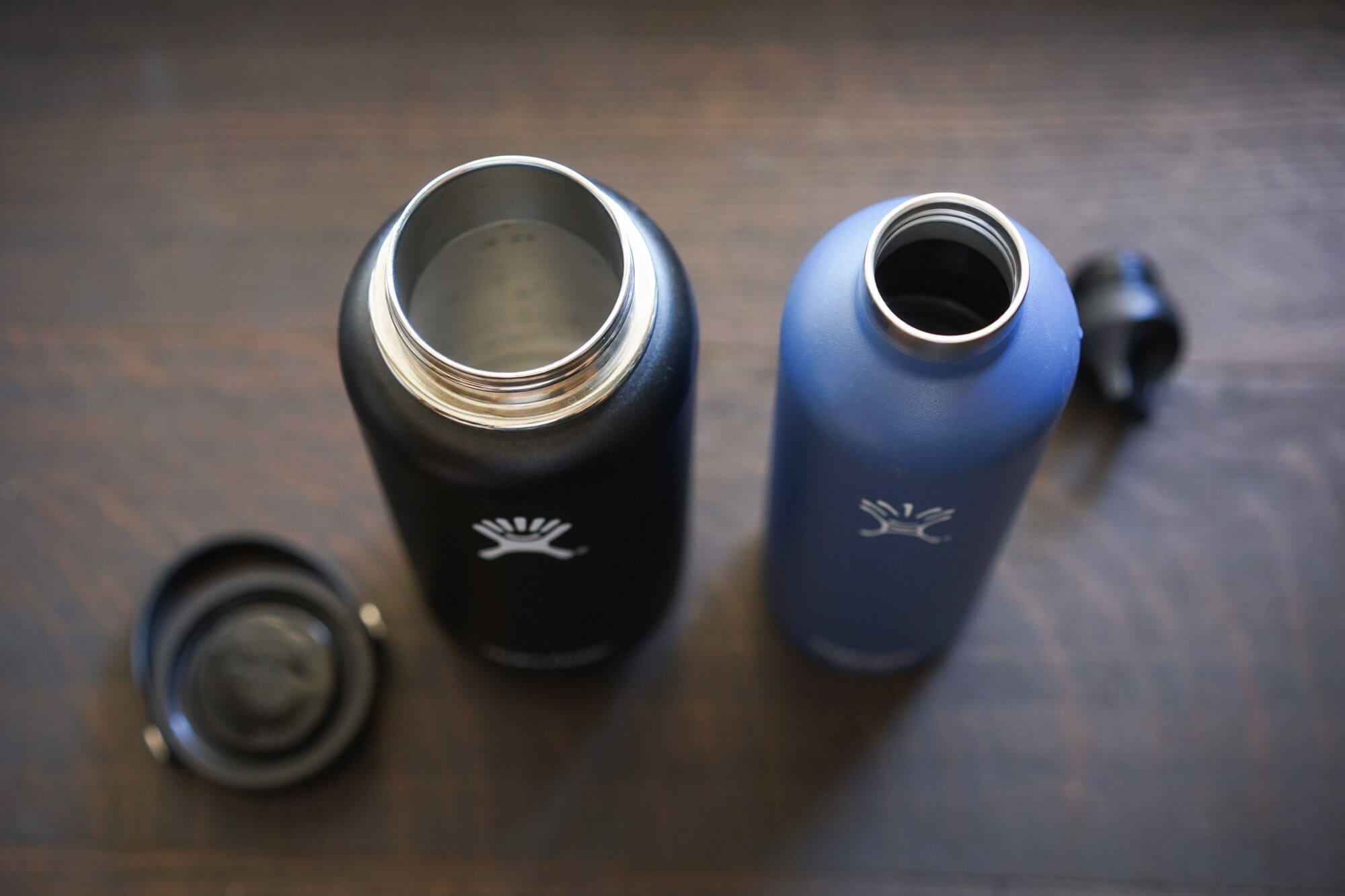 We’ve been testing water bottles since 2017, and there are three ways to think about drinking from them.

Some like sipping from wide-mouth water bottles, since that opening is more like a cup and the top rim is less likely to hit your nose.

Others prefer a narrower mouth, since it allows you to hydrate without worrying as much about spilling.

A third option is to drink from a spout — all of the water bottles we tested can be fitted with an optional spout or straw lid. The spout restricts you to drinking much more slowly, but it ensures you don’t spill all over your shirt. If you’re trying to keep water ice-cold for an entire day in the heat, a spout also keeps heat from rushing in every time you drink.

The wider a bottle’s mouth is, the easier it will be to clean with a good kitchen scrubber.

There are two reasons not to put a vacuum-insulated-stainless-steel bottle in a dishwasher. The first is over concerns about joints inside the insulating sleeve being stressed by the heat, which causes the metal to expand and contract and may damage soldered joints or plugs. The second concern is about damage to that eye-catching colored coating. YETI says all of their bottles are designed to take the heat of a dishwasher. Hydro Flask and Klean Kanteen both say not to put any of their insulated bottles in the dishwasher. 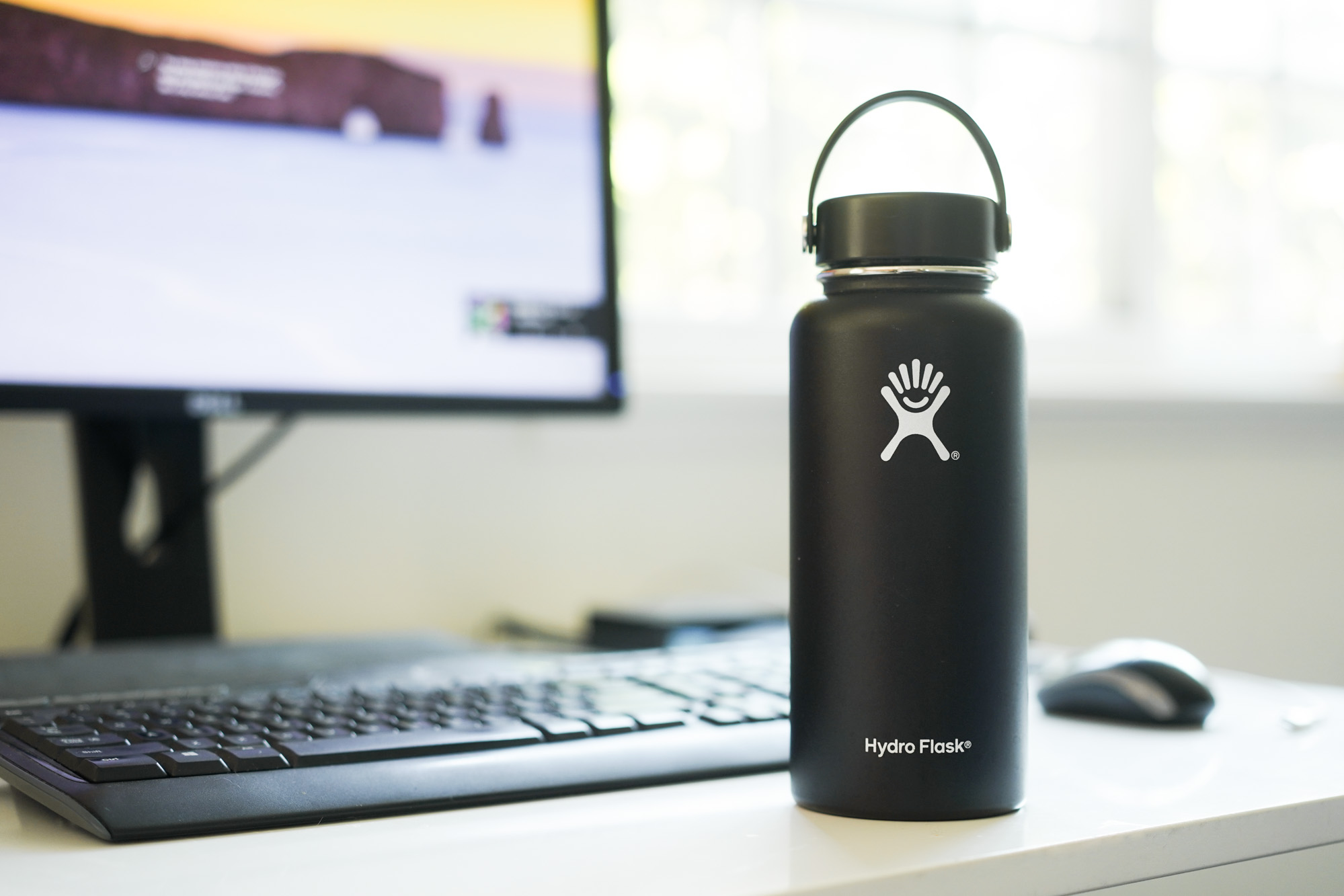 The Hydro Flask is one of the most popular insulated water bottles on the market, starting as a humble Oregon design team selling bottles in 2009 and eventually growing a brand strong enough to sell for $210 million in 2019.

Hydro Flask has stayed a steady course, expanding into other lines of insulation-related gear but keeping their water bottles front and center. Redditors and Instagrammers alike are very enthusiastic about the brand and their very generous policies toward replacing things like broken caps or even entire bottles. 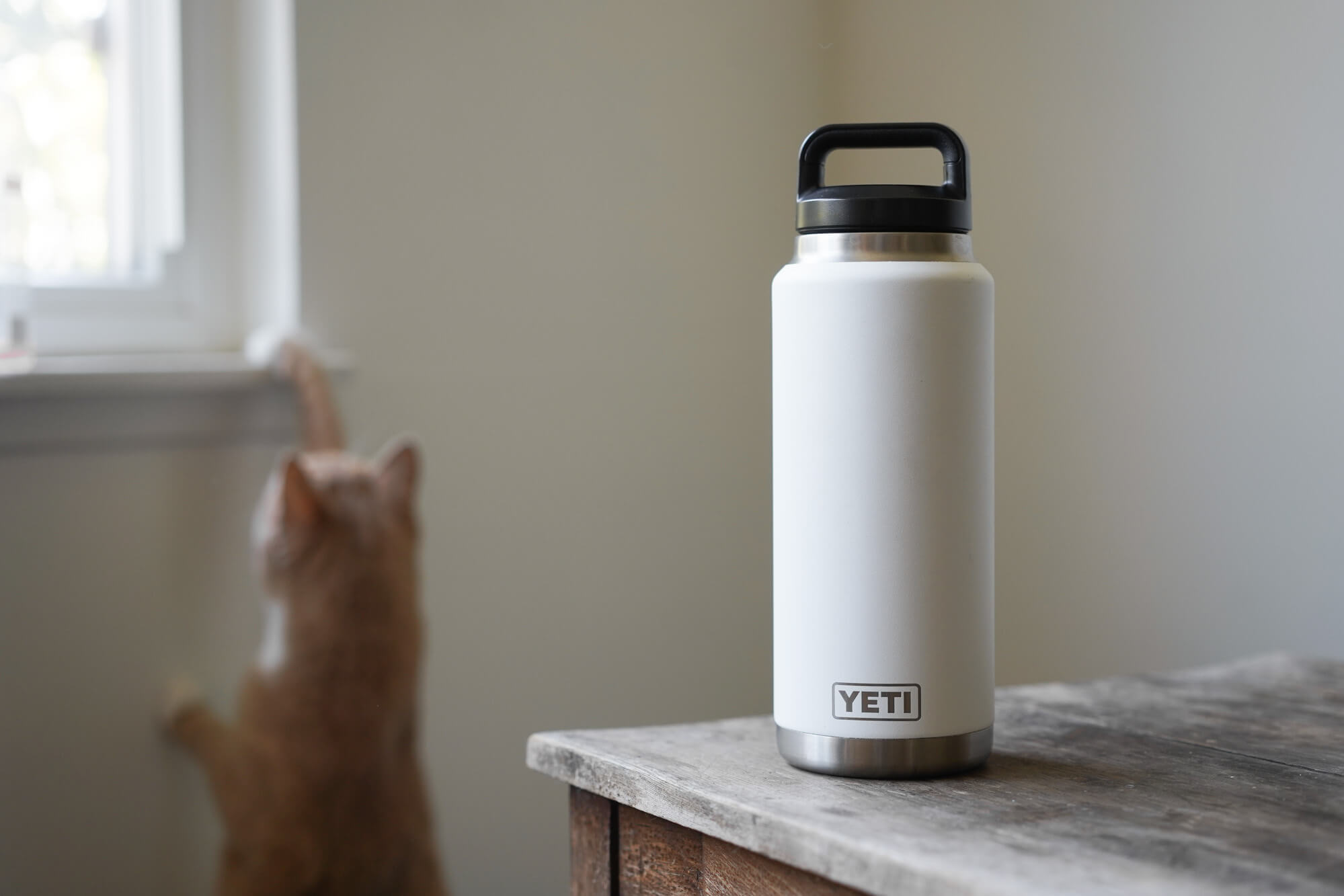 The YETI – Rambler Bottle is strong competition for Hydro Flask. This is another brand that has skyrocketed from humble beginnings to a widely-recognized brand. They’re probably still better known for their coolers and the original Rambler insulated tumblers, but this bottle has made big waves.

The main points of innovation YETI has made are in design, with a mouth, lid and accessories all innovating slightly over what other manufacturers are doing. The Mag Dock spout cap has the best features of CamelBak’s excellent Chute Mag bottle. The Bottle Cup Cap turns the YETI into a thermos.

But at the end of the day, this bottle is still vulnerable to dents and scratches, just like any other bottle, and it will set you back $5–10 more than either of the other top-tier brands, or a whopping $35 more than generic insulated bottles.

YETI’s warranty is also only five years, while both of the competitors in this price bracket are offering a lifetime warranty to offset the steep initial investment. 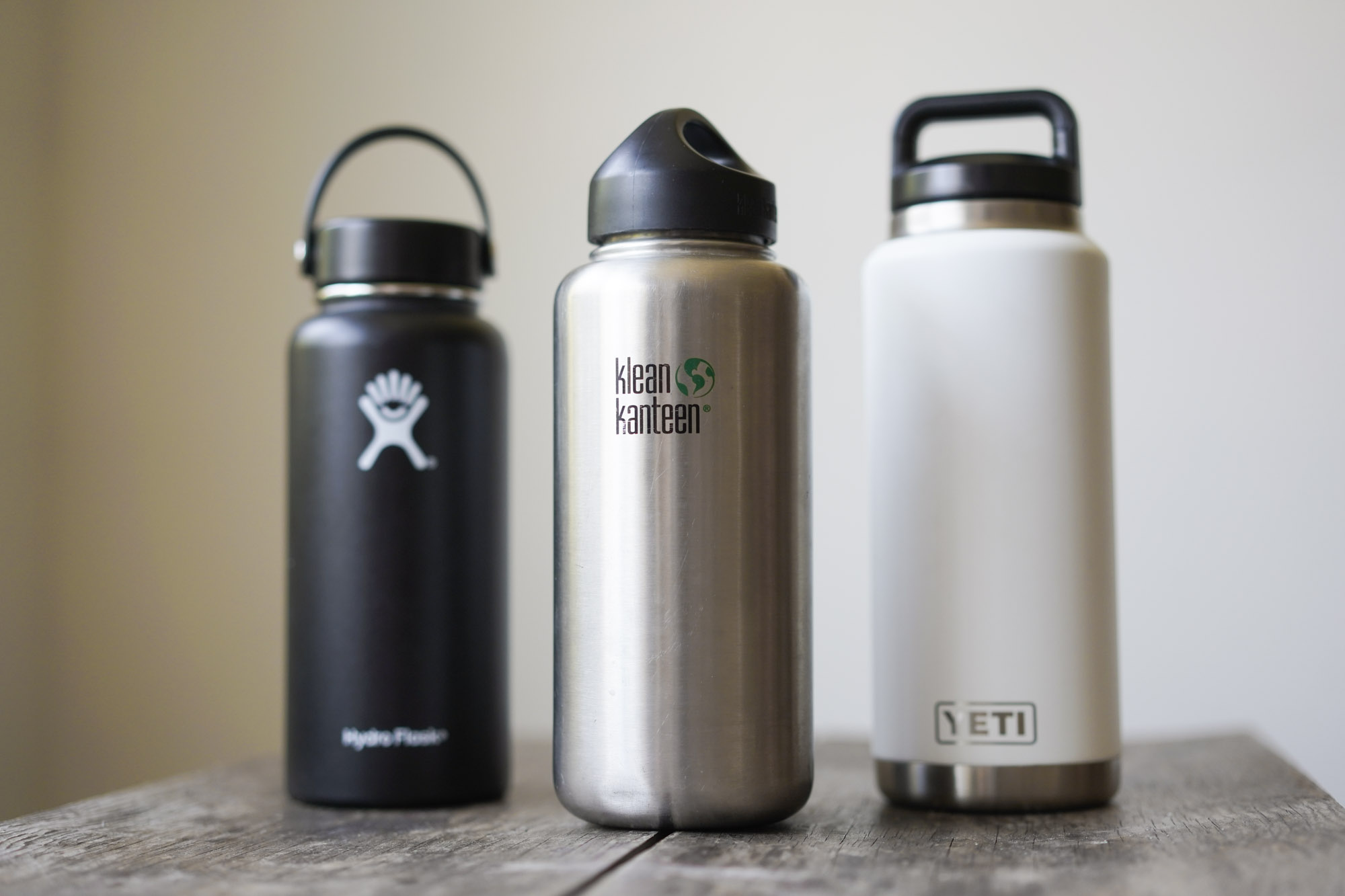 Choosing between YETI and Hydro Flask is tough. If you like wide-mouth openings, they’re both fine, though the YETI is wider. Both have excellent straw lid options, though YETI also has a few interesting spout designs to choose from. Both bottles keep your drink cold for a full day, though the YETI has an advantage.

If you’re worried about durability, either bottle will dent if you drop it on its side when it’s full of water, so finding the handle or carry system that works for you is essential. That said, the folks in charge of Hydro Flask’s lifetime warranty are very generous when it comes to accidental damage, while YETI’s warranty runs out after five years.

All in all, we think the YETI Rambler Bottle is the better of these two ultra-popular brands, but for the best insulated water bottle our money is still on a dark horse contender: the Klean Kanteen – Classic insulated.

Klean Kanteen has innovative lids and gives you the option of a narrow-neck design to keep drinks cold even longer than the YETI. It’s also a bit less expensive and easier to find. Klean Kanteen has a lifetime warranty, though they don’t guarantee their bottles against damage from a dishwasher like YETI does for the first five years. 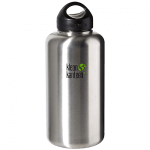 This lesser-known insulated bottle has most of the best attributes of competing brands. It's not as cheap as a generic bottle, but you will get a full lifetime warranty for a lower price than either Hydro Flask or YETI.