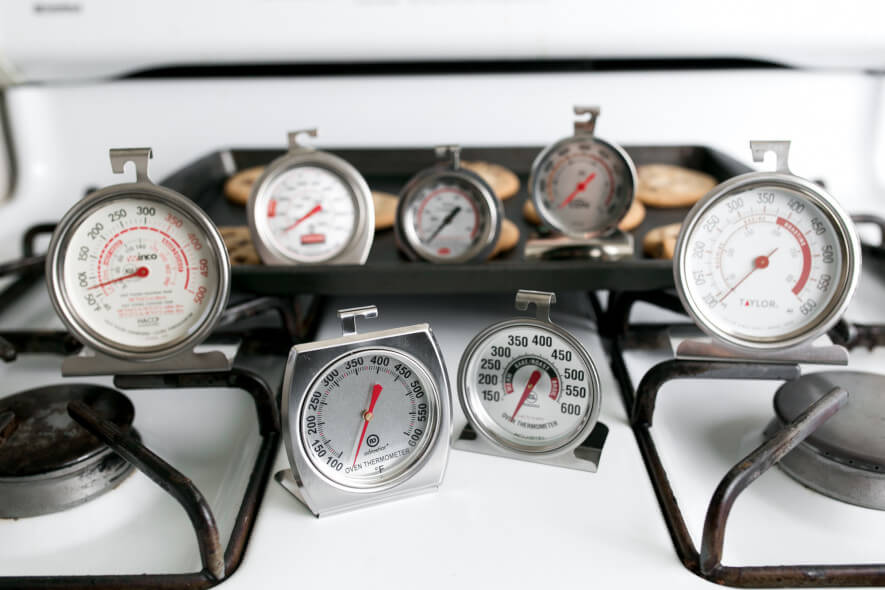 We tested seven of the highest-rated oven thermometers and determined that Admetior – T837AH is the best oven thermometer for accurately measuring temperatures throughout an oven’s cooking cycles. A close runner-up is the AcuRite – 00620A2, which was also spot-on accurate in all of our testing and easy to read through an oven door’s tempered glass. 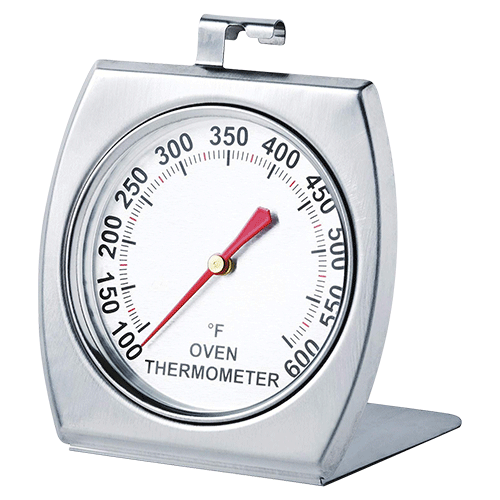 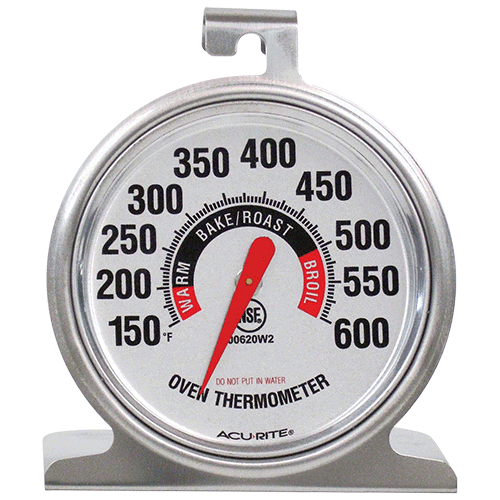 We tested seven of the highest-rated oven thermometers and determined that Admetior – T837AH is the best oven thermometer for accurately measuring temperatures throughout an oven’s cooking cycles. A close runner-up is the AcuRite – 00620A2, which was also spot-on accurate in all of our testing and easy to read through an oven door’s tempered glass.

There aren’t actually many free-standing oven thermometers on the market, and they all have the same design: a dial face between 2-3 inches in diameter, a hook for hanging the thermometer on an oven rack and a base for standing it up. During our research and testing, several distinctive features came to the forefront.

Accuracy: This is obviously the most important feature you want an oven thermometer to have. Except for two — the Admetior – T837AH and the AcuRite – 00620A2 — the thermometers we tested were off by 10-40 degrees. For example, America’s Test Kitchen’s top pick, the CDN – DOT2, was consistently 25 degrees cooler in all of our tests.

Readability: One might think that this would be a given; it isn’t. It’s essential that you can read the thermometer’s dial through your oven door’s tempered glass, so you don’t need to open it during the cooking process and release the oven’s internal heat.

Wide base: If you’ve ever used an oven thermometer, you’ll know that hanging it from an oven rack is practically useless. It’s difficult to position the thermometer in the center of the oven (where most food is baked or roasted) so you don’t knock it off when putting in a casserole or roasting pan.

Most oven racks have a grid with intervals of 1.5 inches. An oven thermometer should have at least a 2.25-inch base so it stays stable when you stand it on top of the rack. Four of the thermometers we tested had a two-prong base; they proved no less stable than the three models with solid, no-prong bases.

We had to first determine whether our test oven was calibrated. In our review of digital meat thermometers, we also reviewed oven probes and so used our two top picks, the Taylor – 147281 and the ThermoPro – TP21, to test our oven’s temperature.

We increased the temperature to 450°, and our oven thermostat was still accurate. We also compared the temperature recorded by an infrared thermometer, and it matched the probes’ readings. Thus we were confident that we had a calibrated oven. Throughout our testing, we kept the probes inside the oven and monitored temperatures during its heating and cooling cycles.

We lined up the thermometers in the center of the cool oven. The Rubbermaid – FGTHO550’s base is only 1.5 inches, so it had to be hung. We heated the oven to 250°, 350° and 450° and recorded each thermometer’s readings. Over the course of three days, we performed these tests seven times, letting the oven cool before starting again.

The Admetior – T837AH was the consistent winner, showing the exact oven temperature every time in all of our tests. The Admetior has only a 2.1-inch face, housed in a uniquely shaped stainless-steel frame. (It also comes in a 1.7-inch base, which we think is too small.) All the other oven thermometers we tested are round; the Admetior is square-shaped with curved sides on a 2.75-inch, two-pronged base. This unusual design also made the Admetior better balanced and more stable on the oven rack.

The Admetior’s numerals and markings are very clear and evenly spaced. The face doesn’t have the distracting colors and unnecessary cooking terms (for example, “bake,” “roast,” etc.) of other thermometers, which made it easy to read. We liked that the temperature was only in Fahrenheit; the other thermometers we tested had an inner circle with temperatures in Celsius, but they’re absurdly small and were difficult to read through an oven’s window.

We were surprised that the AcuRite – 00620A2 isn’t as well reviewed on Amazon as the other thermometers we tested because it was just as accurate as the Admetior. The AcuRite was also the easiest to read, thanks to its large and bold temperature numerals, which, like the Admetior, are only in Fahrenheit. (Apologies to the rest of the world!)

The AcuRite does give up some of its 2.1-inch face to cooking terms, and the degree markings between the temperature numerals are tiny and squeezed together. They could still be discerned through the oven glass, though with some squinting on our part. Its two-prong base is slightly arched, which we thought might affect stability, but this design did, in fact, keep the thermometer standing evenly on the oven rack.

With a 3-inch dial face, the Taylor – 5932 was one of the largest oven thermometers we tested. It has a two-prong, 3-inch base, which kept the thermometer standing even when bumped. Most people buy this Taylor model because of its large numerals and degree markings. Even with two inner circles for Celsius temperature and suggested heating zones for warming, baking and roasting, the Taylor was easy to read; though we would have preferred if temperatures were in a bold font.

The Taylor’s accuracy was erratic. At lower temperatures it was only off by a couple of degrees; at higher temperatures, however, it was 25 degrees cooler than the actual temperature.

The Winco is another large-face oven thermometer. Similar in design to the Taylor, it has a 3-inch face, but it’s more difficult to read. Temperature numerals and degree markings are large and black up to 300° F; from 305°-500°, the numerals are in a pale red that disappear behind oven-door glass. Degrees in Celsius are also shown in black up to 140° and in red after 150°.

The large dial face is also crammed with text for hot-food handling and cooling temperatures in black and red, making it a confusing mess. The Winco gave us inconsistent readings during our tests with discrepancies of 5–50 degrees in our tests.

The Cooper-Atkins – 234HP-01-1 is slightly larger than the AcuRite, but its stainless-steel housing covers up .25 inch of its face, partially obscuring the edges of the temperature numerals. It has a solid 2.5-inch base, so it stayed stable on the oven rack, which is the only positive feature we can state about this thermometer. The Cooper-Atkins was one of the worst performers and never once showed the correct temperature.

The CDN – DOT2 was America’s Test Kitchen’s top pick for the most reliable oven thermometer; It’s time they re-reviewed. We agree with ATK’s assessment that the CDN – DOT2 is easy to read with its bold temperature numerals, and its wide base prevents the thermometer from tipping over. But that’s about all we agree with. There are no individual degree markings, so we had to guess what the temperature was: It could be 352° or 354°; there was no way of knowing.The CDN – DOT2 also gave inaccurate readings, ranging from 12-28 degrees cooler.

The Rubbermaid – FGTHO550 is inaccurately described on Amazon as “instant read.” We tested this claim, and it’s false: This is a regular oven thermometer, and it was the least accurate. The Rubbermaid’s stainless-steel housing feels more substantial and durable than most of the other thermometers, but its base is too narrow, so it falls between the oven rack’s grid. Temperature numerals in Fahrenheit and Celsius are the same font size, which we found to be confusing to read at a quick glance.

The Rubbermaid gave an accurate temperature reading only once; in the six other tests, it was off by 25 degrees and as much as 40 degrees.