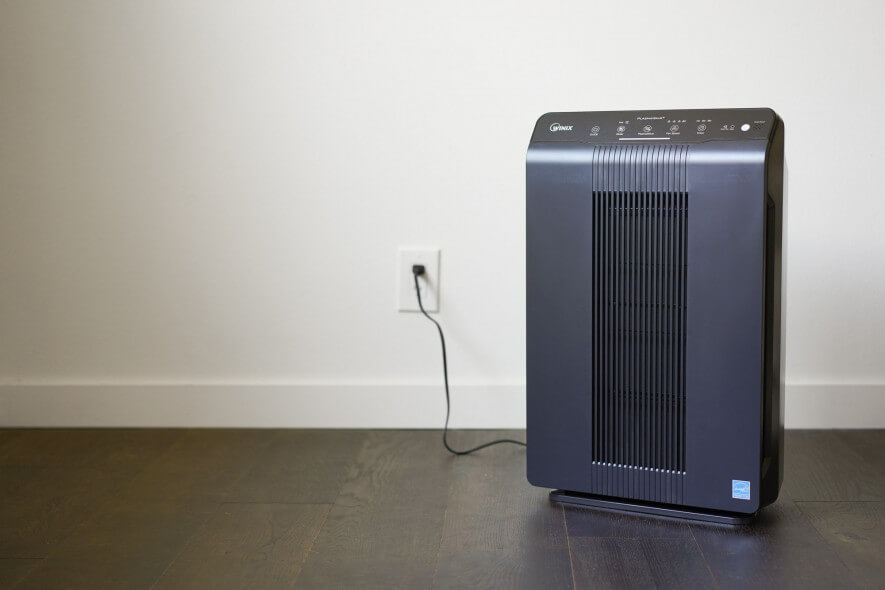 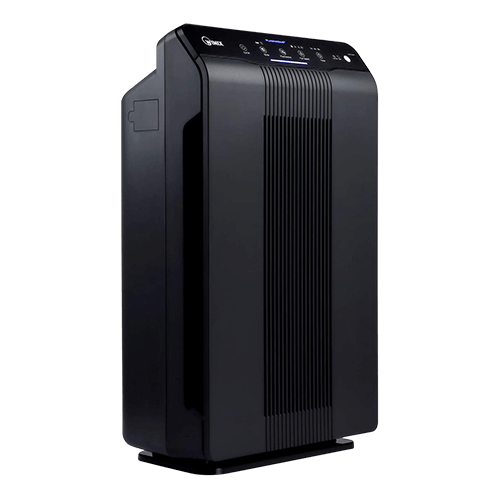 The High Efficiency Particulate Air (HEPA) filter standard was developed for filters used in nuclear energy plants, and any filter meeting this classification will capture 99.97% of the tiny, most-difficult-to-trap particles in the air. These particles are just 0.2–0.3 microns in diameter, the size of some virus and bacteria bodies. Performance with bigger or smaller particles is even better.

Air purifiers are good at capturing particles that float in the air. But if the fan moving the air through the filter doesn’t circulate all the air in a room a few times per hour, the purifier won’t be able to keep up with new dust coming into that room from outside. In homes that aren’t tightly sealed, all the air in the house might be replaced two or three times per hour with dusty air from outside.

While the HEPA standard covers most of the worst airborne pollution, it doesn’t include everything. Volatile Organic Compounds (“VOCs”) come in clouds of single molecules less than 0.0003 microns in diameter. You can smell even low concentrations of many VOCs, and they’re much more difficult to trap than particles.

The large sponge-like surface area of an activated carbon granule can remove VOCs by sticking to them as they flow past, but if the filter is thick enough to be effective it will be expensive. See our comparison of Winix carbon filters below.

If you have a bad odor or smoke to get rid of, ventilation should be your first effort. Using a filtered vacuum or mopping will also make a much bigger difference in controlling dust or pet dander than filtering your air. Check out our full review for a list of steps you should take before you resort to an air purifier.

When we researched our review of the best air purifiers, we asked experts if the 99.97% capture rate of a HEPA filter is enough to protect against virus exposure.

Jeffery Williams, from the Indoor Exposure Assessment team of the California Air Resources Board, sums up the trouble with filtering viruses: “There’s really no clean-cut answer. The tests for these devices are using a very contrived scenario when they’re quantifying efficiencies. Specific dust sizes are generated, and then the amount of dust before and after the filter is measured and you get an efficiency. In the natural world, you’ve got a very broad range of particles; some bacteria and viruses are large enough to get captured, some aren’t.”

If you want to take the precaution of filtering your air, remember that air purifiers can’t do anything about a virus trapped behind a closed door or stuck to a doorknob. Cleaning frequently touched surfaces is still your best defense. (Also, stop touching your face.)

Winix air purifiers use an electrical discharge system they call a “PlasmaWave” to boost efficiency in their most popular air purifiers. This system generates a small high-voltage, high-frequency electrical discharge, which ionizes particles that escape from the filter. The result is that a static cling effect makes free-floating particles clump together so they’re easier to filter, and it can destroy some micro-organisms and VOCs.

The effectiveness of an ionizing air purifier is limited by how much ozone it creates as a side effect. Ozone is a good disinfectant, but it’s harmful to humans. The California Air Resources Board (CARB) tests air purifiers and certifies that they don’t make more than 0.050 parts per million of ozone. All the WInix models we recommend have been certified with these tests, and you can manually deactivate the PlasmaWave feature if you’re extra-sensitive to ozone.

We haven’t smelled ozone coming out of any air purifiers that pass CARB’s test, but they do perform slightly better in particle collection tests than those that don’t use ionizers.

How we test air purifiers 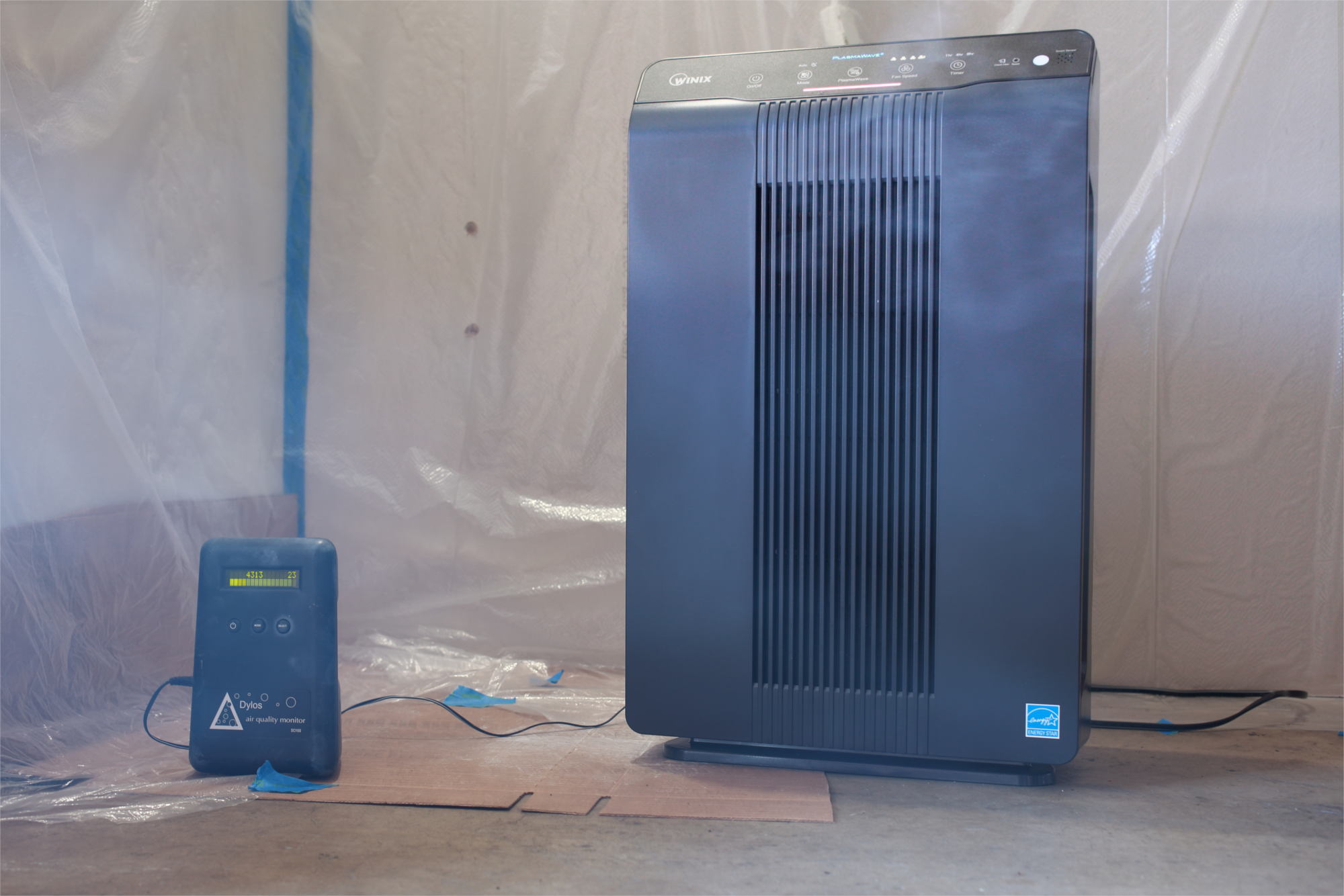 The differences between air purifiers come down to three questions: how big of a room can it clean, how loud is it, and how much will it cost to run?

The Association of Home Appliance Manufacturers (“AHAM”) with their Verifide program have developed a standard to answer the first question. They test air purifiers with three categories of air pollution: large dust particles, pollen-size particles and smoke-sized particles. The result is certified as a “clean air delivery rate” (CADR) — the cubic feet of air per minute that an air purifier can clean. (Multiply the CADR number by 1.66 and you’ve got an estimate for square footage the purifier can handle.)

We mostly purchased air purifiers that are already certified this way, but a few top-selling models — including a widely-recommended model from Coway — aren’t. Manufacturers give their own specification for how big a room the machine is supposed to be suitable for, so we set up a controlled test to get a fair comparison between models advertised for the same use.

We sealed off a test chamber (equivalent to 137 square feet — the size of a large bedroom or small living room) with a plastic barrier and introduced controlled pollutants, then recorded the falling number of half-micron particles detected by a Dylos particle counter. We ran air purifiers on both high and low speed settings to see how much performance manufacturers were giving up in order to turn down the noise. Along with the performance tests, we also checked noise output of each model and checked power draw at different fan settings.

As you can see from the chart above, the top-selling air purifiers with CADR ratings of 200–240 cubic feet per minute all performed very well, cleaning out a thick cloud of ultra-fine dust and smoke particles in less than 30 minutes. Air purifiers that don’t have a real airflow rating, even the expensive Dyson – TP01, can be surprisingly poor at cleaning air.

The Winix was the top performer in this roundup, but any device certified with a similar CADR is worth considering.

The Winix 5300-2 is our pick for households that actually need an air purifier, because it costs only $30 more than bedroom-sized machines. Winix also includes an air-quality sensor and a timer, and it’s very quiet. 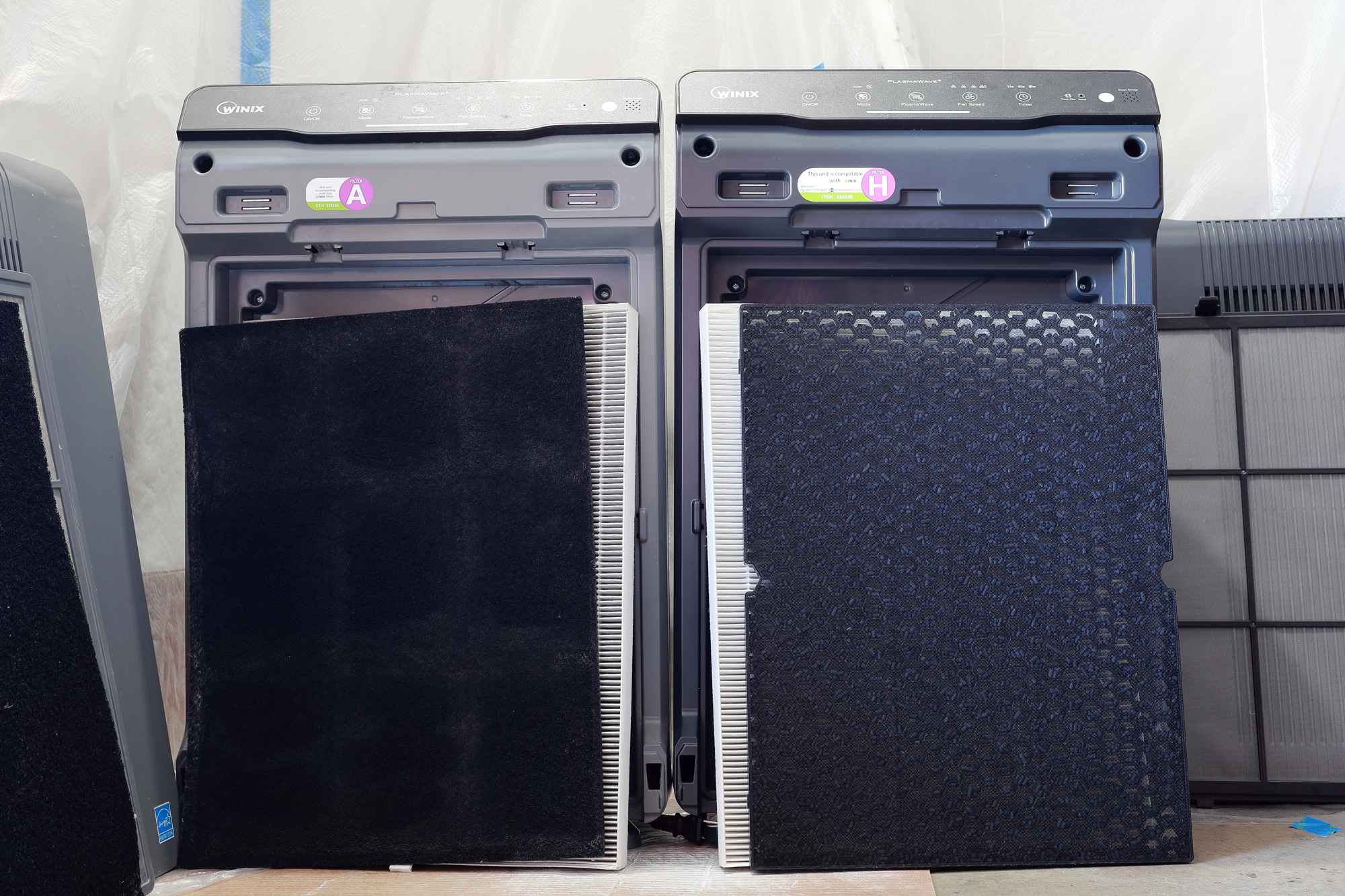 The only update to the Winix line we’d consider over these two models is the newer Wi-Fi-controlled AM90 model for about $20 more than the 5500-2. It takes the same cost-effective filters as the 5300-2, and all are rated for the same cleaning performance and power consumption. Other new models are slightly lower-performance for a higher price, and they aren’t any easier to fit in tight spaces. 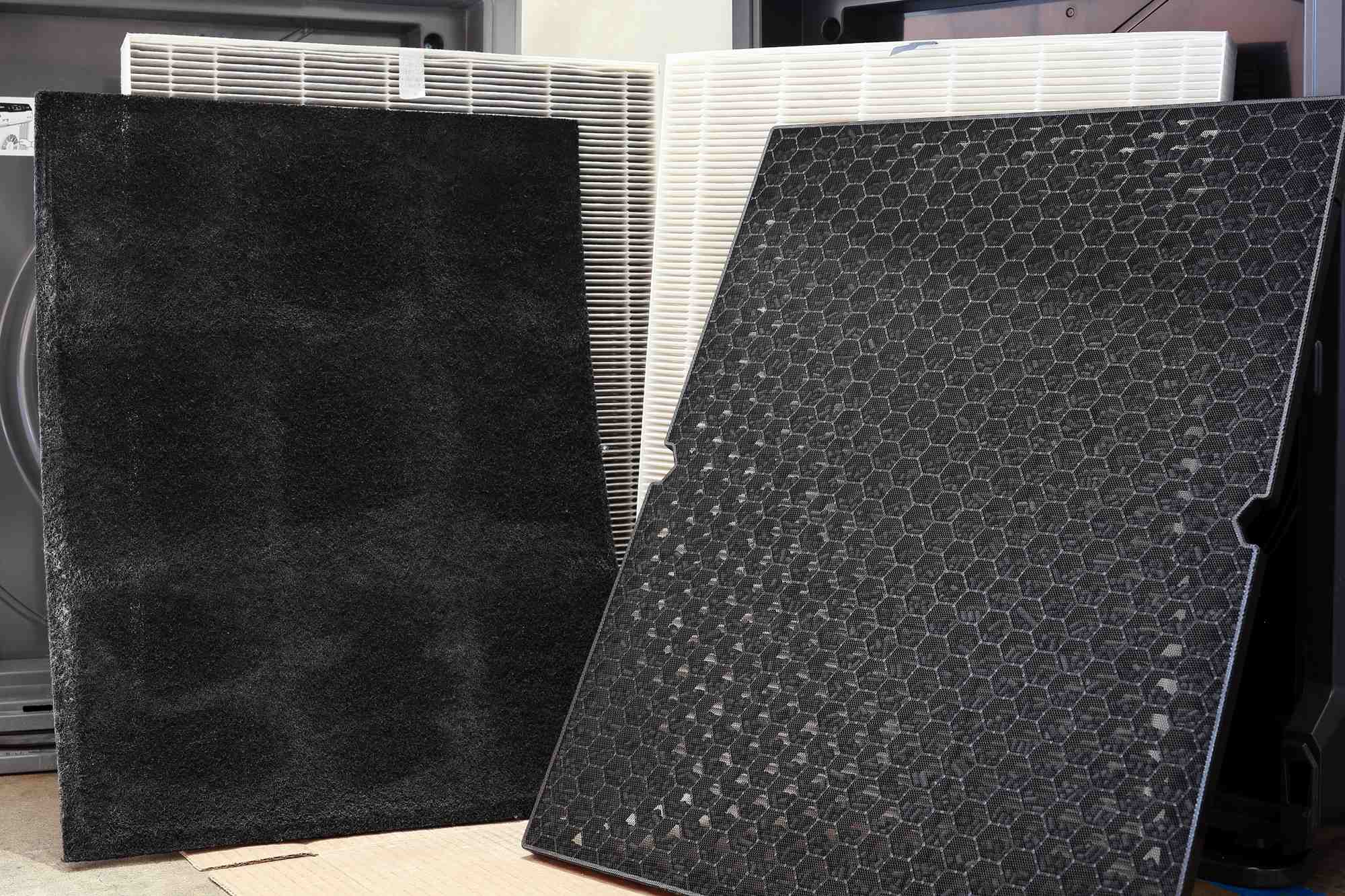 The carbon filter in any low-cost air purifier is tricky to evaluate, since they’re all so poor at actually filtering VOCs. If you want an affordable air purifier with a good carbon filter to soak up nuisance odors that pass through the HEPA filter, your choices are very limited and this one is worth considering.

That said, even the heavier carbon filter in the 5500 is not very effective against high concentrations of VOCs. If you’re hoping this will give you relief from the smell of fresh paint or a brand-new foam mattress, manage your expectations.

We tested both designs against tobacco smoke, and the 5500 filter was a little bit better than the 5300, but the smell blowing through the other side of the filter was still strong. Venting smoke-filled air (whether from tobacco products or cooking) to the outdoors is a much better solution than trying to filter it.

We checked the fit, and the felt-like pre-filters from the 5300-2 fit in the 5500-2 (it’s perfect if you double them up), so you could buy it for the remote and still get the same filter replacement price as the base model. The 5300-2 has alignment rails on the snap-in filter cover, so the more expensive semi-washable filter won’t work as a retrofit upgrade. 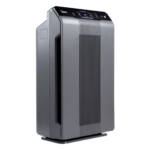 The 5500 pre-filter is “washable,” but only in the sense that you can rinse hair and dust out of it — the VOC-capturing carbon inside cannot be reactivated by washing. This bigger carbon filter is rated to last one year if you rinse it off every three months, compared to a three-month life for the disposable carbon pre-filters.

If you desperately need to clean up strong VOCs, the Austin Air – A450A1 Healthmate Plus is the air purifier recommended to us by a local environmental-services company and has been deployed in homes near natural-gas well leaks. But at a replacement cost of $360 for each canister, it’s a last choice after all other methods of clearing the VOCs away have been attempted. The giant Austin Air “plus” filter canister has 780 cubic inches of activated carbon, compared to our estimate of 70 cubic inches in the Winix 5500 and 40 cubic inches in the 5300.

The HEPA filters that capture dust are the same between most popular Winix models and will work for a very long time before they get plugged with household dust. Typically these filters lose some of their ability to attract ultra-fine dust first, then slowly clog up with larger dust and restrict airflow. After two years of intermittent use, we checked the original filter from our Winix 5300-2 with our particle counter, and it was letting through less than 10% more ultra-fine particles than a new filter.

On all the points that matter most in a cost-effective air purifier — speed to clean dust out of your air, noise and operating cost — the Winix 5300-2 and 5500-2 are in first place. You could build a bare-bones filter-plus-fan setup that would be less expensive, but Winix has done all the work making these machines as efficient, quiet and easy-to-use as they can be.

For small spaces, the 5500-2 still puts out 95 cubic feet of air per minute even on the nearly silent low-speed setting, which is competitive with most compact air purifiers on their loudest settings. The only reason not to spend the extra $30-50 on a Winix PlasmaWave model instead of something smaller is if you physically can’t fit one in your room.

If you need to clean a larger space, we’d suggest seriously considering multiple Winix units or upgrading to a filtered HVAC system, instead of buying a $600–$1000 air purifier. More expensive air purifiers can usually move air more quickly, but in a larger room a single unit will have more problems getting dust that’s trapped in far-away corners.

Compared to the 5300-2, the 5500-2 adds a remote and a semi-washable carbon filter that’s not better in any practical terms. If you want the more expensive filter or the remote, it’s still an excellent value compared to most other brands of air purifiers. You can also use the less-expensive filter pack to refill the 5500-2. 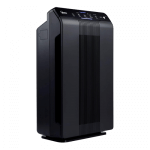 Winix has won the value-oriented air purifier crown with their PlasmaWave line. The 5500-2 uses the same HEPA-class filter as the rest of the line, but for about $25 more you get a thicker carbon filter and a remote.