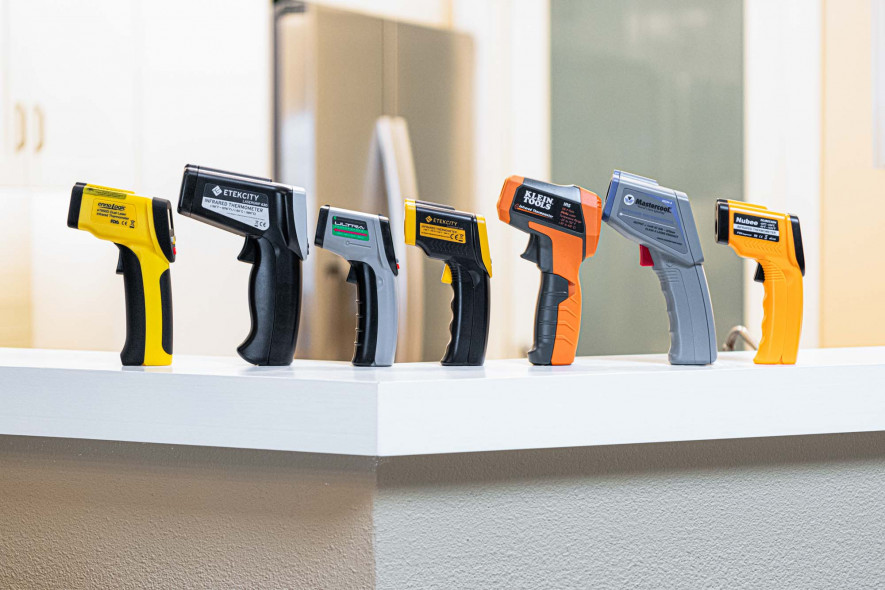 We tested seven highly recommended infrared thermometers to find which was the most accurate in measuring temperatures from below freezing to 600 ℉. We’ve selected the ennoLogic – eT650D as the best infrared thermometer, which is loaded with features for both the home cook and the HVAC worker and was the most accurate in our tests. Our budget pick is the Etekcity – LaserGrip 630 , which has the same features and is just as accurate, but is somewhat limited by its larger size and blue-backlit LCD screen. 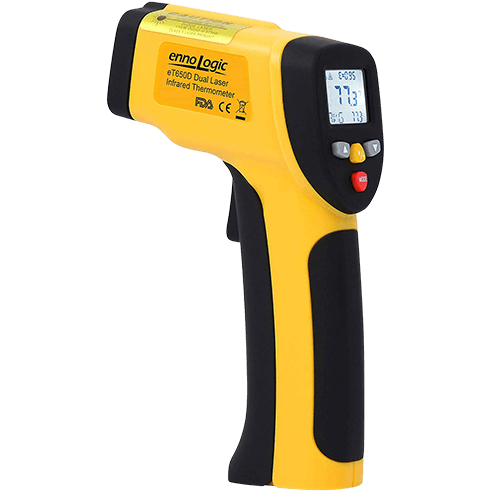 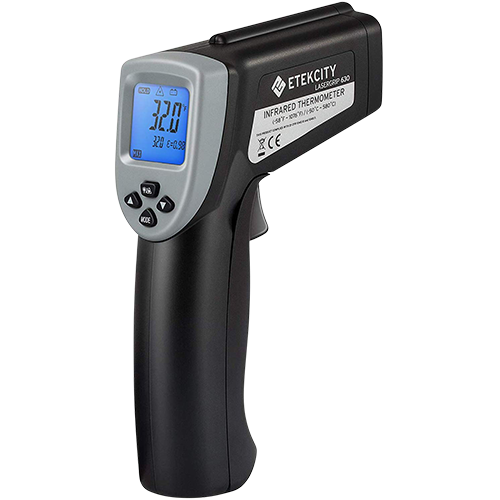 We tested seven highly recommended infrared thermometers to find which was the most accurate in measuring temperatures from below freezing to 600 ℉. We’ve selected the ennoLogic – eT650D as the best infrared thermometer, which is loaded with features for both the home cook and the HVAC worker and was the most accurate in our tests. Our budget pick is the Etekcity – LaserGrip 630 , which has the same features and is just as accurate, but is somewhat limited by its larger size and blue-backlit LCD screen.

How we selected infrared thermometers to test

Once we researched how infrared (IR) thermometers work, we looked into the ways that people actually use them. Amazon reviews were enlightening, as there were not as many people who use an IR thermometer in the kitchen as we thought. The most frequently cited uses were testing the temperature of a pizza stone, monitoring simmering sugar for candy-making and gauging the correct temperature of oil for deep-frying. A surprising number of people mention that their IR thermometer’s pinpoint lasers were also excellent for entertaining a bored cat.

We found more relevant information from restaurant workers, who use IR thermometers for monitoring the temperature of food on a buffet line, HVAC workers for checking ventilation and heating systems and electricians for finding overloaded circuit breakers, hot spots and other electrical issues. We then checked out their recommendations on Amazon, authentic review sites and Reddit threads and selected the IR thermometers with the highest ratings for accuracy, durability and user-friendliness.

How does an infrared thermometer work? 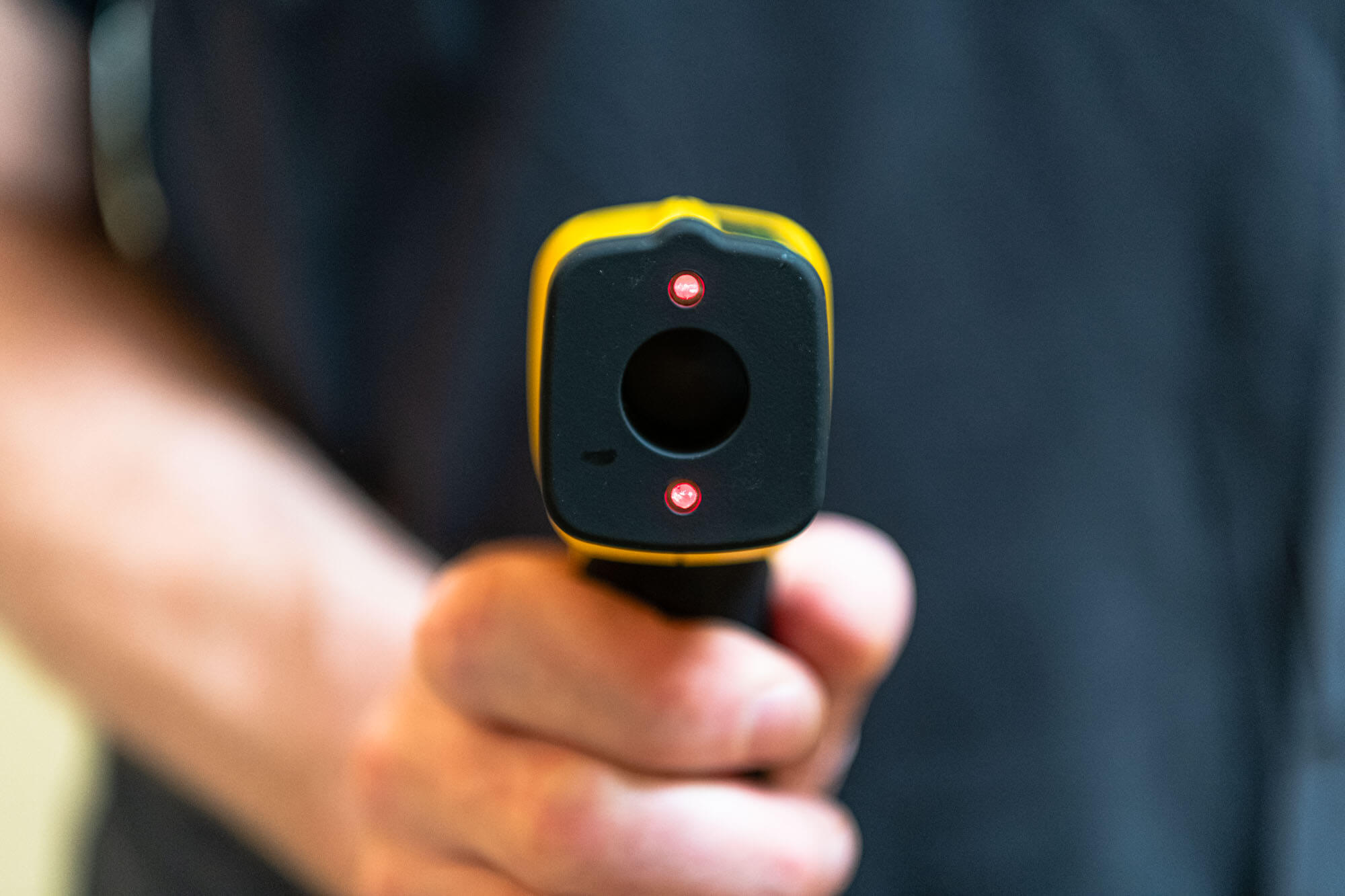 Infrared energy is part of the electromagnetic light spectrum and is emitted from the surface of all organic and inorganic objects when they’re hot. The rate this energy is radiated out and absorbed into a material is called emissivity, and it is measured on a scale of 0.0 to 1.0. Most IR thermometers are pre-set at .95 or .97 emissivity, which covers the levels of materials that are derived from animals or plants. (Materials with reflective surfaces, such as polished aluminum have a much lower emissivity.)

An IR thermometer (also known as a pyrometer) has a lens that collects infrared energy from an object and funnels it into a detector, called a thermopile. The thermopile converts the energy into electricity, which is then displayed on the thermometer’s LCD screen. Although this process seems complex, it occurs in microseconds.

Unlike a probe thermometer, an IR thermometer is non-contact and can only measure external temperatures. It is designed to be used from a distance; for example, testing the temperature of a pizza oven or finding a hot spot on a grill. An IR thermometer is commonly used in restaurants, HVAC installation, house inspection and automotive repair.

You can’t use an IR thermometer, however, to check if your oven is calibrated, since the oven door needs to remain closed. To measure your oven’s temperature, use our top pick from our review of the best oven thermometer.

Most manufacturers recommend checking an IR thermometer’s accuracy with a simple test of filling a glass with crushed ice and adding water. The ice and water are then stirred until the ice begins to melt. The intention is to get the water chilled to 32 ℉ and then aim the IR thermometer into the center of the glass. Our two top picks, the ennoLogic – eT650D and the Etekcity – LaserGrip 630 hit 31.9 ℉ or 32 ℉ every time.

We heated a pizza stone in a 550 ℉ oven and measured its temperature. The Klein Tools – 1R5 was the only thermometer that matched our calibrated oven thermometer.

Our refrigerator was set at 36 ℉, and the freezer was set at 0 ℉. We took several measurements in the same non-reflective spot in the center of the freezer and fridge. All of the thermometers were accurate with the fridge temperature; readings for the freezer, however, fluctuated.

We preheated an outdoor gas grill to 550 ℉ and took measurements in four corners. After each measurement, we closed the grill cover and allowed it to reheat, monitoring its temperature with our top pick for probe thermometer to measure its temperature on the surface. During these tests, the soup’s temperature ranged between 181–204 ℉. Again, the ennoLogic and Etekcity – LaserGrip 630 were spot-on accurate.

Accuracy: Because an IR thermometer only records surface temperatures, a number of factors can affect its accuracy, such as ambient temperature, dust, steam, smoke or frost. Every thermometer we tested had an accuracy difference that was plus/minus 3.5–4.0 ℉ or 2% of the reading.

During our tests, there was also variation in readings of the same IR thermometer between two or three degrees. This difference was especially prevalent when we took readings of a refrigerator freezer with fluctuations between three and eight degrees. Two thermometers stood out as the most consistently accurate with repeated testing: the ennoLogic – eT650D and the Etekcity – LaserGrip 630 .

Distance-to-spot ratio: This is the diameter of the circle of surface area that an IR thermometer measures relative to its distance. Most newer models of IR thermometers have a 12:1 distance-to-spot ratio, which means they measure the average temperature of a 1-inch-diameter circle from a distance of 12 inches. For every additional 12 inches away from the target, the spot increases as well; for example, at 24 inches, the diameter increases to 2 inches, at 36 inches, the diameter will be 3 inches.

However, the farther the distance, the IR thermometer records a greater range of temperatures measured around the spot and gives an average measurement of those temperatures. So the general rule is that you should be as close as possible to the object to get a precise measurement.

Fixed vs. adjustable emissivity: Three of the seven IR thermometers we tested had a fixed emissivity of .95 or .97, which is suitable for use in a kitchen for measuring the temperatures of food and liquids and some non-reflective inorganic material. However, if you want to measure a broader range of materials, then look for an IR thermometer that has a mode for adjusting the emissivity level calibration.

Readable LCD screen: You might think that an easy-to-read LCD screen would be a given, but it’s not. The Klein Tools – IR5, Ultra Performance and ennoLogic thermometers had simple white-backlit screens with black numerals and were the easiest to read at a glance. The Mastercool had a multi-colored screen that was confusing to read. The two Etekcity and Nubee thermometers we tested had blue screens with black numerals, and more than once we had to squint to see their readings.

The ennoLogic – eT650D proved to be the most consistently accurate infrared thermometer and is our choice for best overall. It has dual-laser technology with a 10:1 distance-to-spot ratio. Its temperature range is -58 ℉–1202 ℉, one of the broadest of the thermometers we tested. The ennoLogic performed perfectly in all of the tests, although it had minor fluctuation measuring the freezer temperature.

Its brightly lit LCD screen with a white background and black numerals was very easy to read from any angle. The ennoLogic has several modes for measuring high, low and average temperatures as well as for adjusting the calibration for surfaces with different emissivity. The ennoLogic’s ergonomic design fit comfortably into the palms of both testers’ hands with their forefingers resting naturally on the thermometer’s trigger. It’s the most expensive of the IR thermometers we tested, but if you’re looking for an accurate tool, the ennoLogic is your best bet.

At half the price, the Etekcity – Lasergrip 630 is a great alternative. It also has two laser pointers and the same features as the ennoLogic. This Etekcity model has a 16:1 distance-to-spot ratio and can measure temperatures between -58 ℉ and 1076 ℉. It was equally as accurate as the ennoLogic in our testing, although it fluctuated more when measuring the freezer temperature.

Two features, however, held back this otherwise excellent IR thermometer from being our top pick. Its head is one-third larger than all of the thermometers we tested, which made it top-heavy and bulky to maneuver. We also found its blue-backlit LCD screen with black numerals difficult to read.

The Ultra Performance – 39102 is one of Home Depot’s highest-rated IR thermometers. It’s the smallest of the thermometers we tested, and although it has indentations in its handle as finger grips, the Ultra Performance was too small for our testers’ hands. That said, it measured everything accurately, even giving us nearly identical readings from the freezer.

The Ultra Performance has a single laser, 12:1 distance-to-spot ratio and a -58 ℉–716 ℉ temperature range. Its only adjustable function is for switching from Fahrenheit to Celsius, so you’re stuck with its default .95 emissivity level calibration, which makes it worthless for measuring reflective surfaces.

The Klein Tools – 1R5 is sturdily built, with a 2-meter (6.6 feet) drop protection rating, which bulks it up to 10 ounces, the heaviest of the IR thermometers we tested. Designed for HVAC professionals, the 1R5 feels like a real tool in your hand. It has all of the functions you need, double lasers, a 12:1 distance-to-spot ratio and a -22 ℉-752 ℉ temperature range. The 1R5 has a large but dimly lit LCD screen, which caused us to squint a bit.

We tested the 1R5 repeatedly because it gave inconsistent measurements: It was accurate with the iced water, refrigerator and soup tests but wildly inaccurate with the grill, pizza stone and freezer tests.

The Lasergrip 749 is one of Etekcity’s least expensive models. It’s similar to the Ultra Performance, with the same specifications and limitations. It was accurate in all tests, although it did seem to take longer to take a reading, fluctuating high and low before settling on a temperature. Like the Etekcity – Lasergrip 630, this model has a blue LCD screen that is dimly lit and difficult to read.

The Mastercool – 52224-A was the only thermometer we tested that came in a hard-plastic carrying case, which, although nice, is impractical and clearly intended for people who use an IR thermometer occasionally. It also seems to be more marketed for kitchen use since a leave-in meat thermometer is included.

The Mastercool has a 12:1 distance-to-spot ratio, a temperature range -58 ℉-932 ℉ and a single laser that emits a bullseye, which is fun but gimmicky. Adding to the toy-like appearance is its brightly lit, multi-colored screen that is confusing to read. The Mastercool performed well enough, usually within its stated accuracy of plus/minus 4 degrees.

The Nubee – 8500H is another inexpensive, lightweight IR thermometer with limited functions. It’s marketed to just about everyone, ranging from mechanics to farmers to home cooks to cat owners (it’s actually advertised as a cat toy). It has a single laser, temperature range of -58 ℉-1022 ℉ and, unlike its other cheaply made competitors, a mode for adjusting emissivity calibration.

The Nubee is also saddled with a difficult-to-read blue LCD screen like the Etekcity. Performance-wise, it was moderately accurate, failing to measure the pizza stone and freezer temperatures.