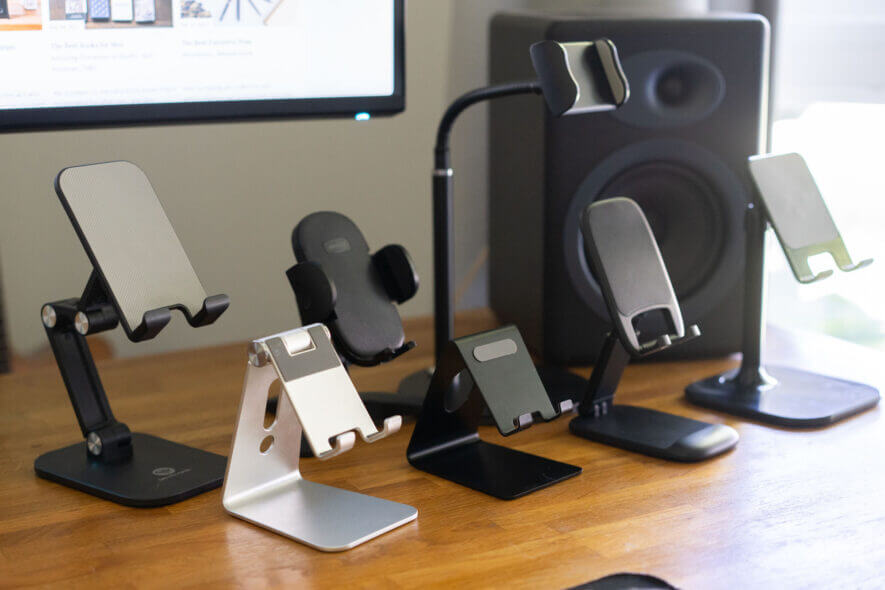 The 7 Best Phone Stands for Desks

We tested seven of the most popular cell phone stands and determined that the sturdy APPS2Car model provided the most stability and accessibility to angle adjustments. We also recommend the OMOTON C2, an attractive brushed aluminum stand that won’t tip over, even when the phone is in a horizontal position. For the frequent traveler, the Lamicall DP13 folds up into the size of a deck of playing cards and can be taken anywhere. 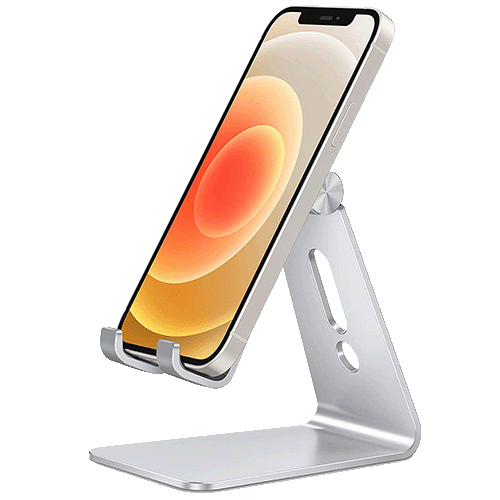 We tested seven of the most popular cell phone stands and determined that the sturdy APPS2Car model provided the most stability and accessibility to angle adjustments. We also recommend the OMOTON C2, an attractive brushed aluminum stand that won’t tip over, even when the phone is in a horizontal position. For the frequent traveler, the Lamicall DP13 folds up into the size of a deck of playing cards and can be taken anywhere.

The 7 cell phone stands we tested

If you own a cell phone, then a cell phone stand is a must-have accessory. Different sizes and heights of cell phone stands can accommodate a variety of frequent cell phone activities, such as hands-off phone calls, video calls or Zoom conferences, watching movies or television shows, or playing games. You may also want to have a cell phone stand at your desk or workplace for glancing at texts or social media updates without interrupting your workflow.

There are hundreds of cell phone stands listed on Amazon, and before purchasing one, you should take the following features under consideration.

Where you put your cell phone stand is essential for getting the most out of it. If you’re working at a desk all day, then you want a cell phone stand that has enough height so you’re not bending your head down to speak to or look at the caller.

Our top three choices stand at or about 4-inches tall, which we found to be ideal for working at a desk without hunching over. But you may want a cell phone stand that extends taller — like OCYCLONE or Klsnuir — for other locations than a workplace or standing. However, in each case of the taller cell phone stands, we did have issues with their stability and balance, especially when used for larger phones or a tablet.

An increased range of angles gives you the option to simply swivel the phone holder in all directions without moving the stand. This is especially useful when on a phone conference or videoing for making adjustments in changes of lighting, background, or number of people.

During our tests, we discovered that cell phone stands that were metal or a composite of metal and hard plastic were better at supporting a large phone or tablet. Plastic stands — especially those that extend — didn’t have a strong base, and so when the phone was set into the holder, those stands were top-heavy and prone to tipping over.

The last thing you’ll want is your phone or tablet crashing to the floor, so look for a cell phone stand that’s designed to stay in place. Almost all the cell phone stands we tested had silicone or rubber pads on their bases for preventing slippage. Most times, though, the pads were small dots or ovals and didn’t do much to stop the stand from sliding. The stand’s physical design will certainly affect its stability. The APPS2Car stand is a low, flat tripod, and although it’s not a beauty, it was the most stable of the cell phone stands we tested.

The APPS2Car cell phone stand was the sturdiest of the stands we tested, and its tripod design prevents tipping over, even if the phone is laying horizontal. The APPS2Car has several features that we love and would want in other car phone stands. The tripod may not be sleek and modern, but it works in keeping the phone stable on any surface. The neck can be adjusted to angles within a 180-degree radius that locks into place. The phone holder is attached to a knob that allows for turning the phone in 360 degrees.

The phone base extends to 3.75″ for wider phones, and when snapped into place, the phone stays put, thanks in part to a non-skid silicone surface onto which the phone rests. When you want to remove the phone, a release button in the back slowly opens the base’s arms. The APPS2Car cell phone stand can accommodate iPhone Pro Max 13 (and lower models), Motorola, and Samsung Galaxy (and lower models) and is thick-phone-case friendly. Reasonably priced, you’ll want several for every room.

The OMOTON C2 is a full metal cell phone stand that we liked for its brushed aluminum looks and rock-solid stability. Its simply, non-fussy design allows for a cell phone to be adjusted at any angle within a 270-degree radius. Of course, it’s unlikely and impossible to position it at the end of that spectrum, since you’re phone would be upside down. But the C2 is so well-made you can definitely lay your phone in a horizontal position without worrying that it might tip over. The C2 was also sturdy enough to hold our 10.5″ tablet.

The stand’s bottom has four silicone spots that hold the stand in place, and the phone holder also has a silicone backing that ensures your phone won’t slip off. The stand’s neck is 4″ tall, so although it won’t hold your phone or tablet at eye-to-camera level, we found it to be an acceptable angle for our desk. The OMOTON C2 comes in seven colors and is a quality product for a relatively cheap price.

If you’re a traveler, the Lamicall DP13 is a great cell phone or tablet stand for taking anywhere. It’s been cleverly designed to fold up compactly into a size that’s roughly the same as a deck of playing cards, measuring 4.25″ by 2.5″ and 3/4″ thick. When fully opened, the stand for holding the bottom of the phone pops up, and the extends 1″ for a total of 4″ total.

The stand is made of a very thick, durable plastic that has the look and feel of metal. The entire backing of the phone holder is textured rubber that grips onto the phone tightly. The weighted base has four rubberized feet that add to the stand’s stability. The DP13 is ideal for watching videos and playing games, especially if you have a larger phone or tablet since it can support the extra weight.

The OCYCLONE stand is made of a thick, durable plastic that has four metal joints for swiveling the 7.5″ neck at any number of angles. The cell phone holder and clips are coated in textured rubber, so the phone stays very secure. The OCYCLONE will accommodate a 10.5″tablet, but we had to work at getting the stand angled correctly since it would tip over if we adjusted the stand too far forward or back.

We liked that the height brings the phone or tablet up to face level, but you need to get the stand at the precise angle, or it will fall down. Nevertheless, it’s a good cell phone stand, but we didn’t put it into our top three because of the balance issue.

Clearly made for people who absolutely must have their phone at eye level for Facetime or Zoom conferencing, the Klsnuir — which arrived as the brand Vocal Stents — is a decent cell phone stand, but we did have a couple of issues with it. First off, you’ll have to figure out how to put it together, because it comes with no instructions. Second, it’s falsely advertised as a phone holder and a tablet holder. The expanding side arm that grips onto the phone only extends to 3 inches, which was barely wide enough to even hold our iPhone XR let alone our 10.5″ tablet.

The Klsnuir has a solid metal base with an attachable foam disk, which actually does nothing for preventing the stand from slipping. We liked its unique gooseneck that allows you to bend the phone holder to any angle. You can’t adjust it too far backward, however, because the whole thing falls over. Minor flaws aside, the stand’s flexible gooseneck is its main selling point.

For those who prefer simple and basic, the Lamicall – S1 cell phone stand will fit the bill. This no-frills stand is made of metal and is in a fixed position, so it can’t be adjusted. It has four rubber dots on the bottom of the stand to prevent slippage, a rubber strip on the back of the holder, and rubber grips for keeping the phone secure. The stand measures 3.5″ high, and the holder is positioned at a 45-degree angle.

We found it too low for placement on a desk, so you would probably need to elevate it on a shelf or a few books. Also included is an envelope labeled “spare parts,” and it contains additional rubber appliques for the base and phone holder.

Assembly is definitely required for the Doboli phone stand. Basically, it entails screwing the neck into the base with the provided Allen wrench. Once assembled, it’s pretty rickety and, being constructed out of plastic, seems cheaply made. The Doboli has a 5″ tall neck, which can be extended by 3 inches, and it does elevate the stand to a good height for a desk.

Nothing really holds your device in place, however, and when we placed the phone and tablet on the extended neck, it wobbled, so we wouldn’t suggest using this for a tablet. The plastic base isn’t substantial enough, so the stand is top-heavy and could easily tip over. However, that said, the Doboli can support a cell phone and is another option to consider.