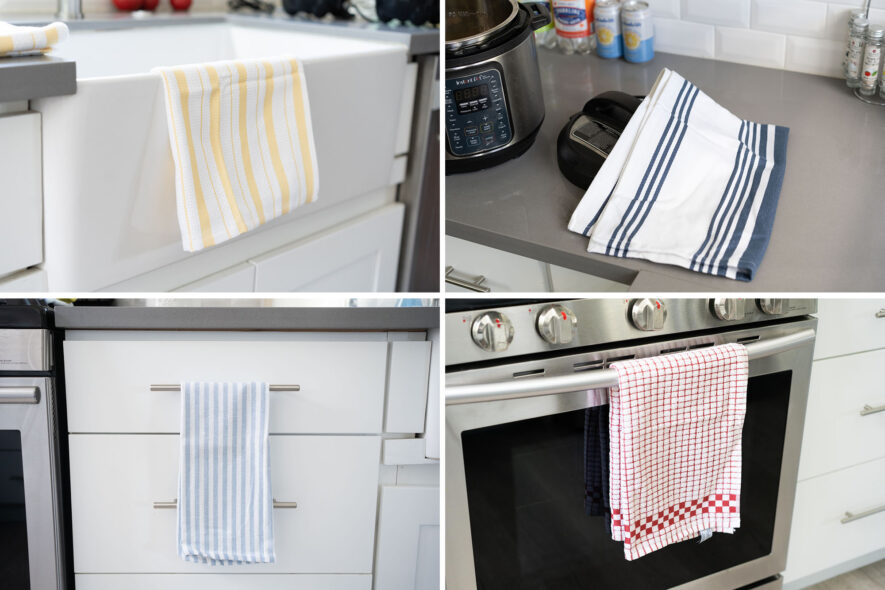 We washed and dried dozens of dinner plates, glasses, and flatware and soaked up puddles of common kitchen spills to find out which kitchen towels were the most absorbent and durable. We’ve selected Fecido – Premium Kitchen Towels as the best overall kitchen towel. A substantial and thick towel, Fecido barely shrank after washing, and its large size allowed us to dry more dishes. Our most absorbent pick is the Williams-Sonoma – Classic Stripe Towels that can soak up puddles in seconds.

We washed and dried dozens of dinner plates, glasses, and flatware and soaked up puddles of common kitchen spills to find out which kitchen towels were the most absorbent and durable. We’ve selected Fecido – Premium Kitchen Towels as the best overall kitchen towel. A substantial and thick towel, Fecido barely shrank after washing, and its large size allowed us to dry more dishes. Our most absorbent pick is the Williams-Sonoma – Classic Stripe Towels that can soak up puddles in seconds.

The 9 kitchen towels we tested

Kitchen towels may be the most underappreciated workhorse in your kitchen. We all take them for granted, but we always grab one when a saucepan handle gets too hot, or for mopping up the red wine you’ve somehow spilled onto the countertop, or protecting your rising pizza dough from drafts, or wiping smudges and dust off your best crystal. But not all kitchen towels are the same, and they often fail to do the primary reason you have them — drying dishes, glasses, and cookware — which is why they end up in the bottom of a drawer or are relegated to the rag bin.

Our testing team included a professional chef with decades of experience. He estimates that he’s gone through hundreds of kitchen towels over the years he’s been in business and advised us as to what makes a great kitchen towel. Kitchen towels can be bought everywhere, and the nine towels we tested reveal several factors you should consider when purchasing them.

Sometimes we have messes that we don’t want sitting around in the hamper, or whatever you’re cleaning up you simply don’t want to put in your washing machine, it calls for a disposable solution like paper towels. But for majority of kitchen work, read on to learn about how we selected the best kitchen towels.

The number one consideration is how absorbent the kitchen towel is. Except for the KitchenAid Albany towel, all the towels we tested were 100% cotton. (The Albany towel was a cotton-polyester blend.) Kitchen towels always need to be washed before their first use, because washing opens up the cotton fibers and makes them absorbent. The towels we tested were absorbent to a degree, but the thickness and weave of the Fecido and Williams-Sonoma – Striped towels made their absorbency superior to the others.

All cotton towels will shrink when machine washed and dried. We measured all the towels before the first wash and then again after the second wash, and shrinkage was between 1 inch and 4 inches. The KitchenAid – Albany didn’t shrink at all because of its 6% polyester composition. Since you’ll want a kitchen towel to dry many items at one time, it’s best to start out with a larger towel to counteract the inevitable shrinkage. Pre-wash, the Fecido towel and the Williams-Sonoma Striped towel were 20″ x 28″ and 20″ x 30″, respectively, and had minimal shrinkage post-wash, which left us with generously sized towels.

We don’t think you should spend a fortune on kitchen towels, but the less-expensive towels were cheaply made and frayed after washing. The most noticeable threads were at the corner hems where the stitching was becoming loose. Towels that had double-thick hems with strong stitching survived machine washing. Although the Bumble towels were not our favorite, they had the widest and thickest hems and did not fray. The Urban Villa towels also had wide hems with mitered corners, sewn together at 45-degree angles, which proved to be the sturdiest.

Made in Portugal, Fecido – Classic Kitchen Towels are plush and substantial with superb absorbency. The Fecido towels are 100% cotton and barely shrank after their preliminary wash. Because of its large post-wash size, we were able to dry more dishes and glasses at one time. Each towel is made up of thousands of tiny loops, like terry cloth, bunched up into hundreds of tiny, thick squares, measuring 1/4″ by 1/2″, which soak up any liquid in a single pass. Its hem is tightly sewn and showed no signs of fraying after a second wash.

Each towel has a hook for hanging it to dry, but during our week-long testing, we just draped it over the sink, and it dried quickly. The Fecido towels are available in 13 colors with an attractive checkerboard design and after two washings showed no sign of fading. The Fecido towels come in packages of two, four, and 10, and although they are a bit expensive, they are very high quality and should last a long time.

The Williams Sonoma – Classic Striped Towels are the brand’s iconic basketweave towels. Made from 100% Turkish cotton, they had minimal shrinkage and retained their bright color after two washings. They have a thick, securely sewn hem that showed no fraying and a corner hanging loop.

What was most impressive was this thirsty towel’s absorbency. We tried a dinner’s pots and pans in minutes, and then laid the towel on a puddle of water we’d squirted onto the countertop. To our amazement we watched the Williams Sonoma towel instantly soak up the water like a wad of paper towels, and though that side of the towel was wet, we finished drying glassware with the opposite side. The handsome striped towels come in packages of four, which calculates to about $5.50 per towel, and are available in 10 colors.

For the same price as the striped towels, the Williams Sonoma – All-Purpose Pantry Towels are also high quality. This thick towel is made of Turkish cotton with a traditional terry cloth weave on one side and a tight waffle weave on the opposite side. This is a well-made towel and shrank only about an inch after two washings, but we did notice some minor fraying of threads at the hem.

KitchenAid has several kitchen towel sets, and we tested the KitchenAid – Albany set of four terrycloth towels. Surprisingly, the KitchenAid towels were the only towels we tested that didn’t shrink, presumably because it’s a blend of 94% cotton and 6% polyester. The towels aren’t very large — 24″ by 16″ — nor are they soft; in fact, they’re a bit scratchy. But they have a medium thickness that proved to be quite absorbent.

We were able to dry many items at one time, and they were particularly effective in soaking up water that had gathered in between cracks of food container lids. The affordable KitchenAid Albany towels come in a package of four, two single-color towels and two striped towels, and are available in 19 traditional and kitchen-cheery colors.

The All-Clad Textiles Kitchen Towels are reversible for dual purposes. The flat linen-like side is for drying glasses, and the nubby, terrycloth side is for heavy-duty drying and wiping up spills. Both sides proved to be very absorbent. The towels are made of 100% Turkish cotton and the terry cloth side is plush and soft. All-Clad has treated these towels with an antimicrobial agent that inhibits the growth of odors, and after air-drying them, they did indeed smell fresh.

But after two washes, the longer side shrank by 3.5″, and the hem showed some signs of fraying, and threads had begun to come undone on the terry cloth side. The striped All-Clad towels come in 10 muted colors and are sold in packages of three towels at approximately the same price as Fecido’s four towels, which are a better value.

There’s nothing fancy about the Urban Villa Kitchen Towels, but they’re well-made everyday towels that are affordably priced. Manufactured in India and made of tightly woven 100% cotton, they have a medium thickness, somewhat like a folded-over tea towel. The Urban Villa towels have a couple of nice features: The thick hems have mitered corners, meaning they’re sewn together at 45-degree angles, which makes them resistant to fraying. We also liked the sturdy hanging loop that’s made from the same material as the hem.

Absorbency was better than a tea towel but not as good as a terry cloth towel. The Urban Villa towels did shrink somewhat in both length and width, but even with that relatively minor shrinkage, they were still about the same size as our top pick. The reasonably priced Urban Villa towels are sold in packages of three or six and come in a vast array of colors, stripes, and patterns.

Averaging about $2.60 per towel, the KAF Home Kitchen towels are decent bargain towels. They’re sold six to a package — two terrycloth towels and four flat towels — and are manufactured in Pakistan of 100% cotton. Both styles shrank substantially length-wise by 5 inches, but they retained their pretty blue-denim color (they come in five other colors).

The KAF towels aren’t as sturdy as other towels we tested, and their thin hemlines and terry cloth nubs began to fray after two washes. But they were both very absorbent and easily soaked up water on the countertop after we had dried dishes. We’re not sure how durable the KAF Home towels will be, but they can be used for other chores and are affordable to replace.

Bumble Premium Kitchen Towels are one of the most beloved towel sets on the market, but we can’t really attest why, other than they’re cheap. The premium set includes six towels: two lightweight towels, two medium-weight towels, and two terry cloth towels, and a tote bag is thrown in as a gift. Manufactured in Pakistan, they’re 100% cotton, and as with almost all of the kitchen towels we tested, shrank by 3″ lengthwise.

The lightweight towels are basically tea towels and had very low absorbency and might be good for drying a few wine glasses. The terry cloth towels had better absorbency, but after drying dishes, they couldn’t handle a water spill on the countertop. The medium-weight towels are of somewhat higher quality and have better absorbency, although we did need to wipe up the spill twice. Sadly, after two washes the medium-weight towels had begun to fray, but their vivid color didn’t fade.

You certainly get bang for your buck with the Zeppoli – Classic Kitchen Towels — 15 in a package that averages $1.43 per towel — but you’re not getting anything other than glorified bar mops. Despite the ecstatic online reviews, these very lightweight towels have little absorbency, so if you dry more than a few glasses, you’ll need to go through four or five towels at a time.

The Zeppoli towels are smaller than other kitchen towels, and being 100% cotton, they shrank after washing, reducing their width by 2 inches. The towels have a 1/4″ hem, poorly sewn, that frayed in several places. Zeppoli also markets these towels as reusable cleaning cloths, which in lieu of paper towels, is how most people use them. The Zeppoli towels are soft and lint-free, so they would be good for dusting or polishing silverware.