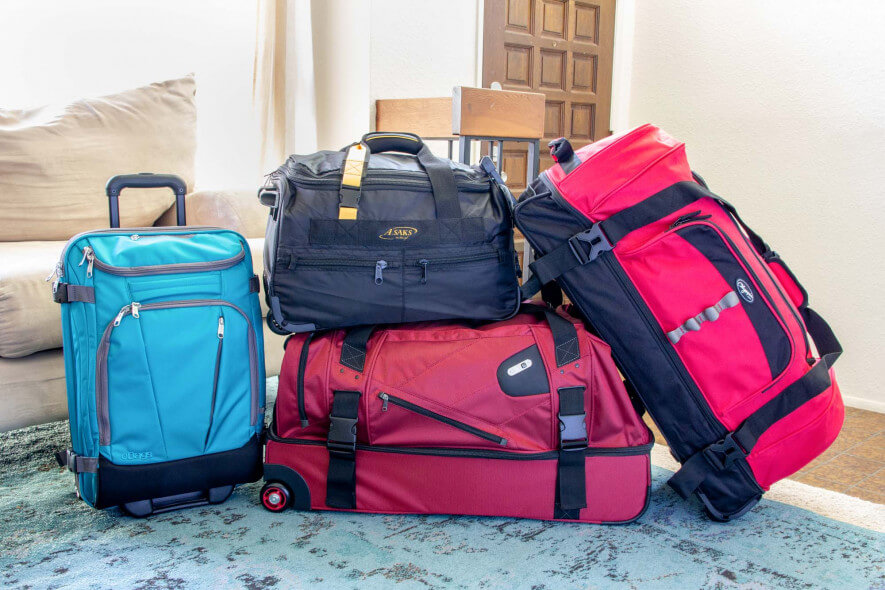 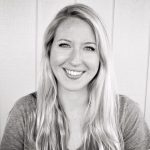 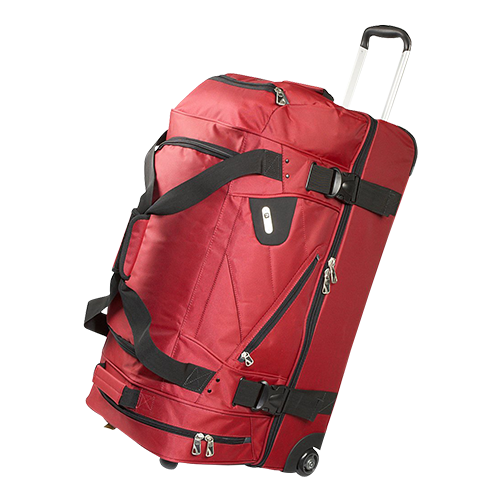 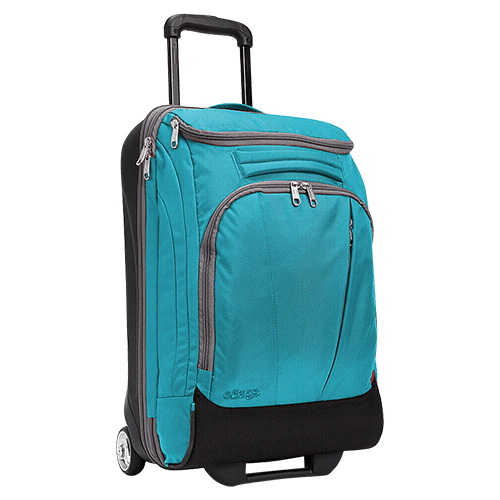 How we selected products to test

Before choosing our rolling duffel bag contenders, we consulted with two flight attendants, Erin Lee and Lam Nguyen, for their tips on buying a high-performing rolling duffel. Erin and Lam have 47 years of combined steward experience between them.

Lam points out that the two downfalls of most rolling duffel bags are poorly designed handles and wheels that don’t roll smoothly. “It can be awkward because duffel bags aren’t made to have wheels, due to their long shape,” she says. “It helps to have large wheels that won’t get stuck in cracks in the ground and a handle design that’s ergonomic and easy to pull up and push down.”

For checked luggage, Erin recommends a duffel made of ballistic materials, which are the most durable.

We also researched buyers’ most highly sought-after features by reading through Amazon reviews and Reddit threads. Based on our findings, we searched for duffels with the following qualities:

We tested two categories of rolling duffels: carry on (around 21 inches in length) and full size (about 30 inches).

For our full-size duffel category, the 30-inch FŪL – Tour Manager Deluxe caught our eyes first. Made of durable 1680D ballistic nylon, the bag features a clamshell design that can also transform into one large compartment. We also selected the 30-inch, 1500D-polyester Olympia – Drop Bottom Rolling Duffel, which users praise for its lightweight yet sturdy construction.

Our carry-on contenders are the 20-inch A. Saks – Expandable Wheeled Duffel, a spacious, expandable design made of 420D nylon, and the 21-inch expandable eBags – TLS Mother Lode Mini, a reviewer favorite made of 840D and 900D twisted poly.

Duffel bags are mainly soft-sided and therefore prone to tearing when checked at the airport. So it’s important to choose one that’s made of sturdy fabric with a high denier count. Denier — the “D” you often see in fabric descriptions (such as 600D, 1200D, etc.) — is a measurement of fabric weight.

Generally, the higher the denier number, the stronger the fabric. However, the measurement is only good for comparing weights within one fabric category (for example, a 600D polyester is actually weaker than a 450D nylon, and so on).

Nylon is a great rip-resistant, durable fabric for luggage, with ballistic and Cordura nylon being the heaviest and sturdiest. Polyester is a more lightweight and less durable option; if you’re going to buy a poly duffel, look for one that’s at least 800D.

Duffel bags come in two rolling variations: two-wheeled (rollers) and four-wheeled (spinners). Each has its pros and cons, and the choice ultimately comes down to personal preference.

Pros: Wheels tend to be larger and recessed (meaning they’re better protected) and are easier to roll over a variety of surfaces than four-wheelers. They also can be rolled up flights of stairs (spinners have to be lifted up stairs) and can handle speedy maneuvering (like when you’re running to catch your flight at the airport) without catching.

Cons: They can only roll forward and backward, and their recessed wheels take up space inside the bag.

Tip: Choose a two-wheeled duffel with the wheels placed a good distance apart. If they’re too close together, the bag will tip more easily from side to side.

Pros: Spinners can swivel 360 degrees and be pushed ahead of you or pulled beside or behind you while upright. They don’t pull on the arm and shoulder.

Cons: A spinner’s wheels are “on” at all times, so you will need to monitor your bag if you’re on even the slightest incline. Because the wheels aren’t recessed, they take up space in overhead bins and are more susceptible to damage. 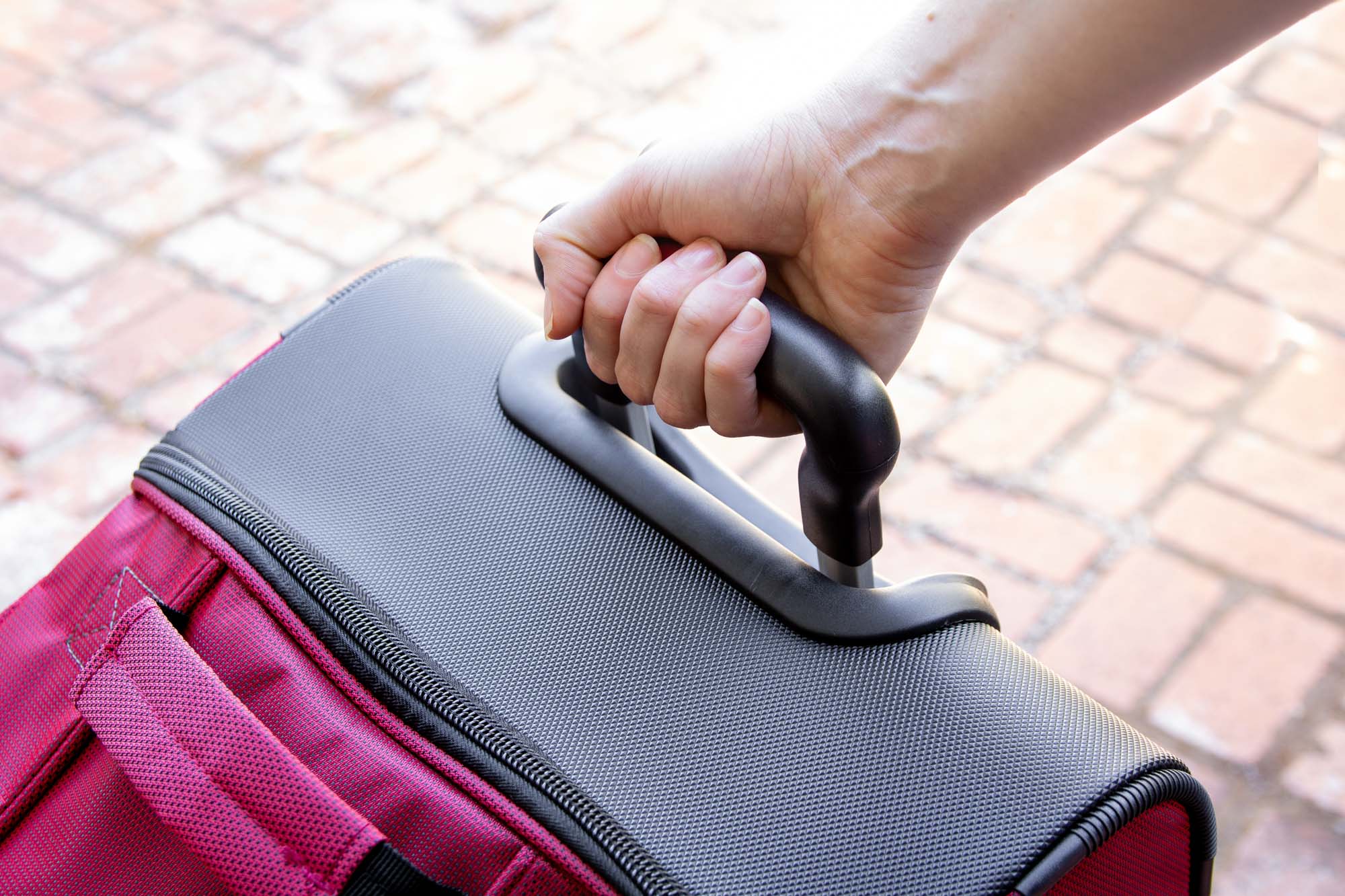 To test our duffel contenders, we packed them with travel staples including, clothes and packing cubes, shoes, toiletries, travel jewelry cases and organizers, and other travel essentials to test capacity, compartment usability and general ease of packing. Then we dragged the duffels over various terrains (pavement, dirt, gravel and cobblestones) and up three flights of stairs to test the quality of their wheels and telescoping handles.

We also carried them by their other handles and lifted the carry-on duffels over our heads to gauge how easy it would be to place them in an overhead bin. We then rated the duffels using these metrics: 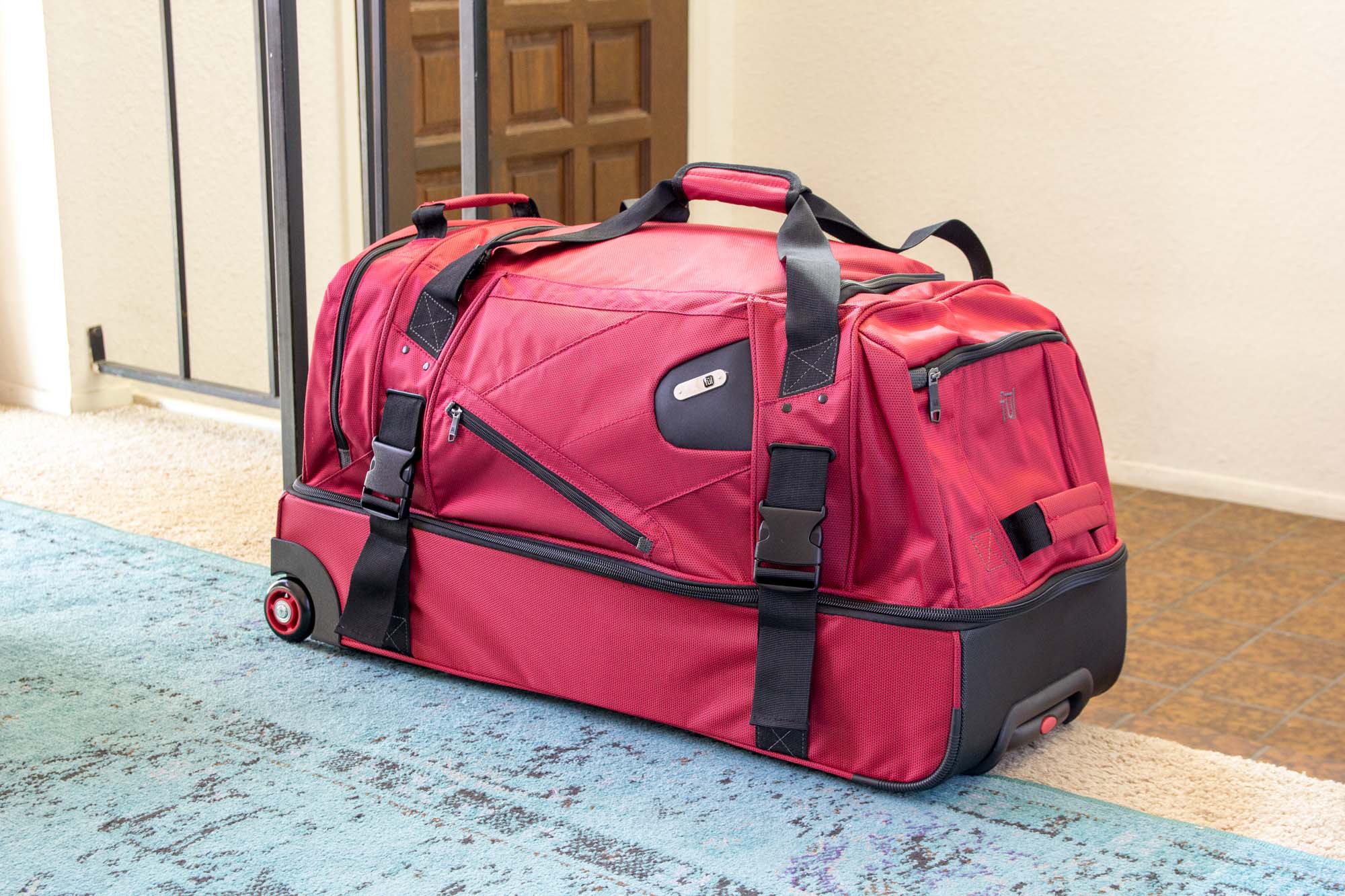 The heavy-duty FŪL – Tour Manager Deluxe was the clear winner in the full-size category. Made of super-durable 1680D ballistic nylon, the FŪL has a split-level design with a hard-sided, water-resistant bottom. Its wide-set inline skate wheels make for a stable, balanced roll, and its telescoping handle extends smoothly and doesn’t wobble. We also like its heavy-duty oversized zippers, which are easy to grab and don’t catch.

All in all, the FŪL is a pleasure to pack. Duffel bags of this size can sometimes feel like black holes that require lots of digging to find the one thing you need. But the FŪL is thoughtfully segmented to prevent that. Among the outer pockets are two deep compartments at either end of the bag — one perfect for shoes or boots, and another next to the telescoping handle for stowing plane tickets, snacks, and other travel necessities.

The top half of the duffel is separated from the hard-sided bottom compartment by a zippered flap, so travelers have the option of dividing the bag into two self-contained compartments or leaving it as one large compartment accessible from the top opening. The hard sides of the bottom compartment make it especially easy to pack, since they stand upright and don’t fall in on themselves. The duffel’s top opening could be a bit larger for easier access, but it isn’t a dealbreaker. 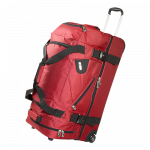 The strong, split-level FŪL is made of durable 1680D ballistic nylon and makes great use of its ample interior space.

One feature we found unnecessary and disappointing for such a well-designed bag is the mesh “window” in the middle of the bag’s separator flap. A solid, windowless flap would be a much sturdier choice for dividing the top and bottom compartments. We also wish there were a strap or pocket to stow the flap when unzipped, just to get it out of the way.

Weighing in at 10 pounds when empty, the FŪL is on the heavier side (the Olympia – Drop Bottom Rolling Duffel weighs about 6.5 pounds). However, if the duffel’s sturdy ballistic nylon and strong construction can hold their own on the tarmac, it’s worth the weight — especially since a similarly sized suitcase weighs about 12 pounds on average. When packed, the FŪL can stand upright on its own, though it did fall over about a third of the time during testing. 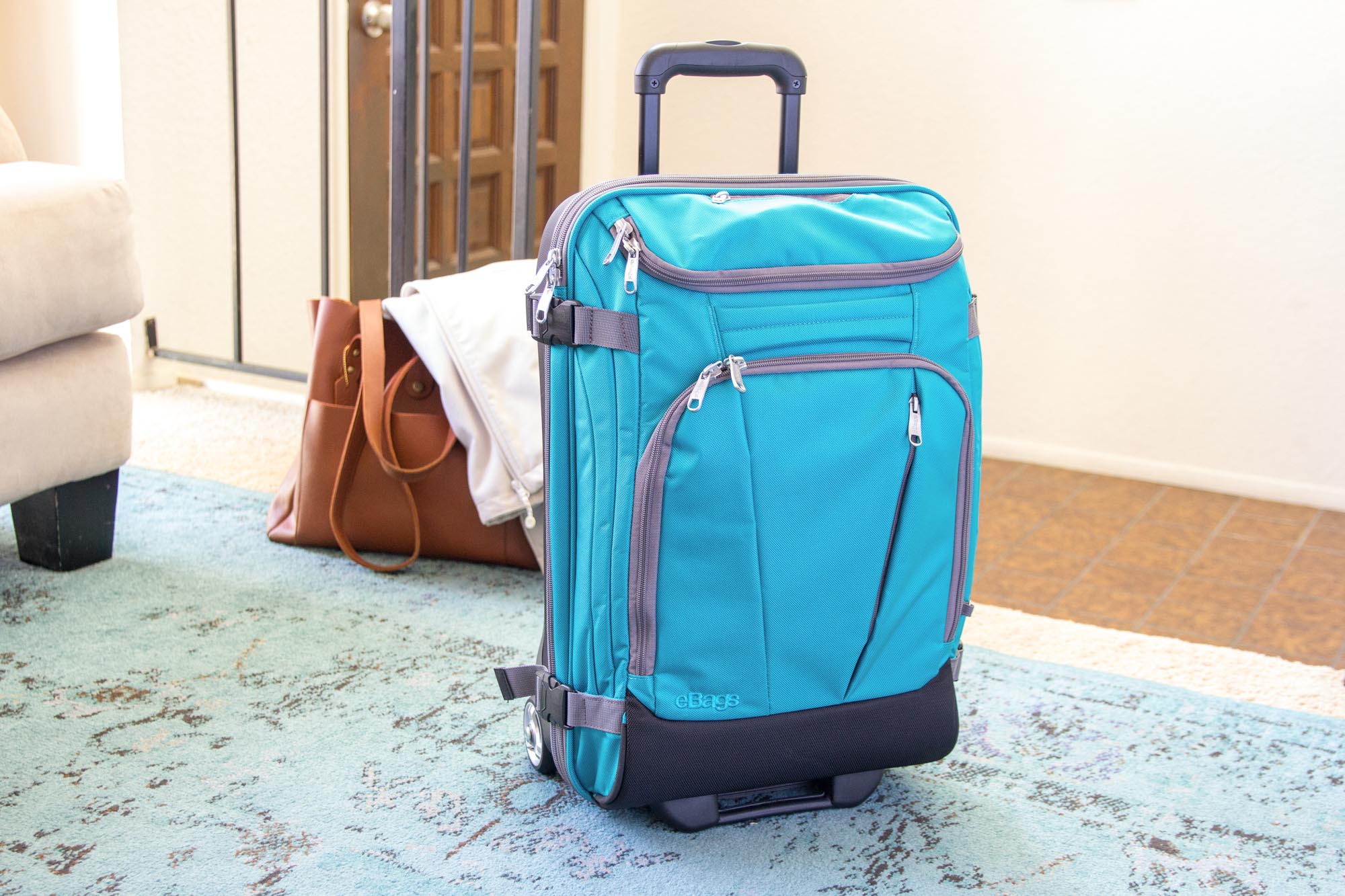 Intuitively designed and loaded with well-thought-out features, the eBags – TLS Mother Lode Mini may just be the perfect carry-on bag. The duffel’s exterior construction is well-designed and solid, remaining upright and refusing to fall over no matter how full we stuffed it (the bag even comes with optional interior rods that can be quickly installed to increase upright support). With large, corner-set inline skate wheels, the duffel rolls smoothly with minimal tipping.

The Mother Lode Mini has a total of four exterior handles, which made it easy to lift horizontally — essential for stowing a carry-on in a plane’s overhead compartment. The bag’s telescoping handle extends to three heights, making it comfortable to pull for travelers of various statures (and kids, too).

We appreciated its stowable strap for securing other luggage on top of the bag, as well as the ID tag tucked securely into a viewable mesh pocket. Even its zipper-pulls are specially designed, ergonomically shaped for the curves of the thumb and forefinger. 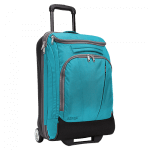 Like the FŪL – Tour Manager Deluxe, the duffel’s top opening is disappointingly small and cramped, especially when the interior divider flap is unzipped and you’re left with one large interior compartment. This may be our only criticism of the Mother Lode Mini, and since the bag functions best with its two compartments separated anyway, it’s not a dealbreaker. The trade-off is a hard-sided segment of the soft top compartment that hinders it from opening wider, but it also protects and further stabilizes the bottom of the bag.

In a perfect world the Mother Lode Mini would be made out of nylon rather than 840D and 900D twisted poly. However, polyester with those denier counts is plenty durable for a carry-on duffel.

Other duffel bags we tested 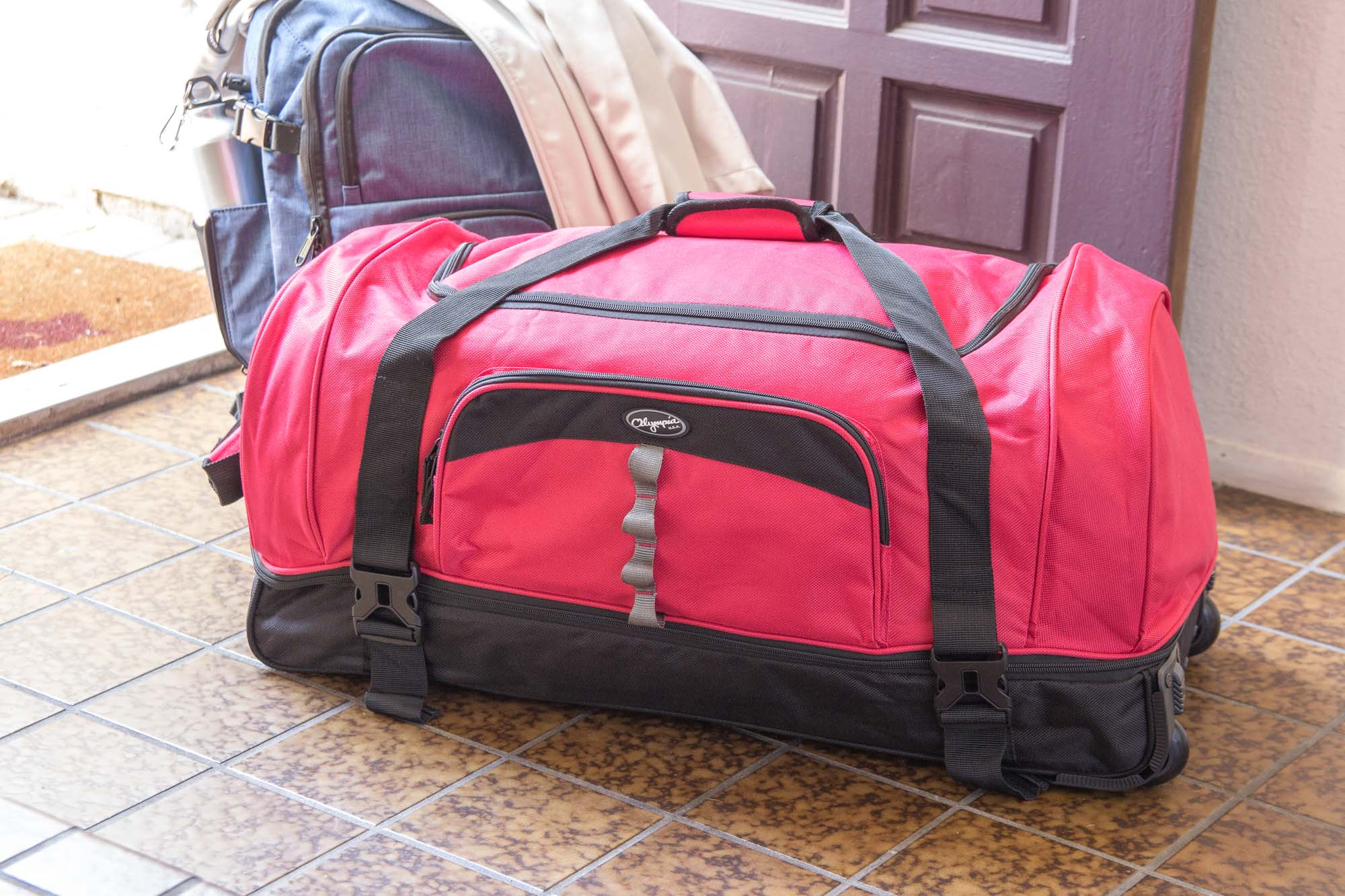 With a cheaper price point, the Olympia – Drop Bottom Rolling Duffel is a perfectly good bargain option. Though the Olympia’s 1500D polyester pales in comparison to the FŪL’s brawny 1680D ballistic nylon, the Olympia is lighter in weight, has a wider top opening for better visibility and is well-built for the price. Its inline skate wheels also performed well in our tests, though they aren’t as wide-set and stable as the FŪL’s. 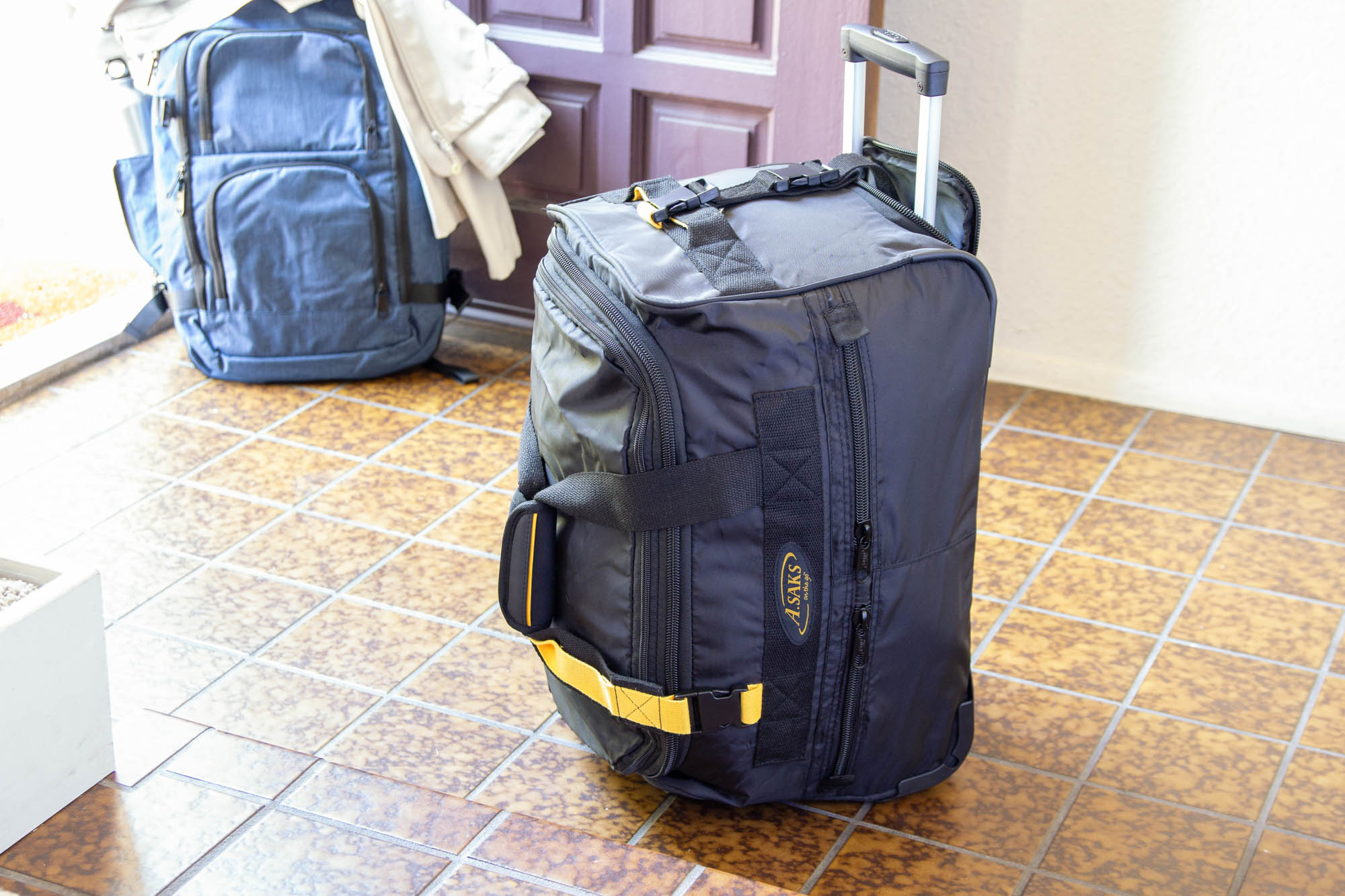 Made of 420D nylon, the A. Saks – Expandable Wheeled Duffel is built like a traditional soft-sided duffel, with collapsible sides and no hard bottom. It rolls well, though its telescoping handle is a bit wobbly and a good couple of inches shorter than the eBags duffel. The A. Saks doesn’t stand up well on its end. We do like its extra cushy carrying handle, and the bag is expandable.

After assessing four top-rated rolling duffel bags, we named the FŪL – Tour Manager Deluxe as our pick for best full-size duffel bag. The FŪL duffel won us over with its extremely durable ballistic nylon exterior, superior construction and great use of interior space. While we didn’t love the unnecessary mesh window in the bag’s interior divider flap, it wasn’t a dealbreaker for such a high-quality travel bag.

For the best rolling carry-on duffel bag, the eBags – TLS Mother Lode Mini was our hands-down favorite, solidly built and packed with perks and features that made it a pleasure to test (despite its smallish zippered top opening).